Lisa Lutoff-Perlo: A Champion of Diversity

In 2014, when Lisa Lutoff-Perlo took over as CEO and President of Celebrity Cruises, she was the first and only woman to lead one of Royal Caribbean Cruises’ brands and the first and only female CEO of a publicly traded cruise line on the New York Stock Exchange.

Diversity is her personal passion, and to help young women to “raise their hand” as the next leaders of the world, Lutoff-Perlo leads by example by standing-up for what she believes in and encouraging others to do the same. 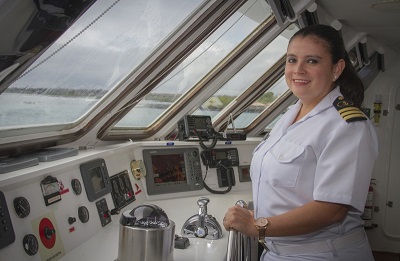 As a leader, she removes barriers so that all may thrive, and one of her first bold decisions as President and CEO was to hire the first American female captain of a cruise ship. Since then, along with Captain Kate McCue of Celebrity Summit, Captain Nathaly Albán has been appointed master of Celebrity Xploration. A native of Equador, Albán was one of only six women in her graduating class at La Escuela de la Marina Mercante Nacional in Ecuador. Prior to graduating, she held a variety of roles in the maritime industry, most notably serving in the FLOPEC Tanker Fleet of the Ecuadorian Navy. Following her graduation, Albán worked on several ships in the region, including Celebrity Xpedition.

Last year, Celebrity initiated a unique partnership with the Regional Maritime University (RMU) in Ghana. For the first time in cruise industry history, female bridge officers are now recruited from a West African country through a new Celebrity Cadet Program in partnership with RMU. The first official new crew member from the program was RMU Cadet Nicholine Tifuh Azirh, who join the bridge team on Celebrity Equinox.

The partnership with RMU came about when Lutoff-Perlo met with students from the Mandela Washington Fellowship at Florida International University. She met Tifuh Azirh who shared her inspiring story of perseverance: Tifuh Azirh holds two degrees, yet following graduation she struggled to find opportunities in the maritime industry as an African female despite her academic performance, subsequent teaching at RMU and cadet experience.

“After hearing Nicholine’s story, I met with our SVP of Global Marine Operations, Patrik Dahlgren, to see what we needed to do in order to give her, and others, the opportunities they’ve earned,” said Lutoff-Perlo. “Nicholine isn’t just a new-hire, she symbolizes hope for women around the world who dream of working in a very male-dominated industry. She’s the face of our industry-leading partnership, and she is an incredible example of Celebrity’s commitment to opening up the world.”

Lutoff-Perlo challenged the company's leadership to increase the number of women on the ships' bridge teams, crew and global staff, and women now make up 20 percent of the line's bridge teams. “Empowering strong women and elevating them to deserved leadership roles is a cause that is close to my heart, and one that Celebrity Cruises truly values,” she said.

“I feel it's my responsibility and my obligation to provide opportunity for those who are under represented in every aspect of business. Diversity around the table and diverse opinion and diverse thought makes for better decisions and they make for more profitable decisions.” 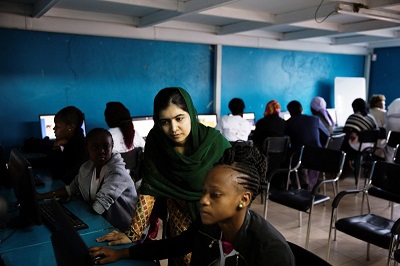 Last year, Celebrity announced a two-year partnership with Malala Fund, whose mission is to secure 12 years of safe, free, quality education for every girl. The Fund estimates that 130 million girls worldwide still do not have access to education. Celebrity has named 19-year old Nobel Laureate and U.N. Messenger of Peace Malala Yousafzai as the Godmother of its newest ship, Celebrity Edge, debuting late in 2018.

Yousafzai began her life as an activist at 11 years old, writing a secret blog about life under the Taliban, who would not permit girls to go to school. She was targeted for her advocacy and, at 15, was shot on her school bus. She survived the attack and continued her campaign for girls’ education around the world. In 2014, she became the youngest-ever Nobel Peace Prize recipient, donating her entire prize earnings to finance a secondary school for girls in Pakistan.

"Partnering with Malala Fund was a natural fit, as we share the same passion and commitment to an incredible cause,” says Lutoff-Perlo. “I happen to run a cruise line, and there are more than 60 nationalities on any given ship at any given time. So they are one of the most diverse groups of people you will ever find in the world, and I also believe that they are one of the best examples of how so many different nationalities and religions and sexes and colors and sexual orientations can actually live in peace and harmony and take care of each other and take care of our guests in a really powerful way.”

Lutoff-Perlo's inclusive initiatives also embrace the line's guests. In October last year, Celebrity announced that same-sex marriages performed on board are now legally recognized. The motion follows a transformative vote in Malta, where a majority of the Celebrity fleet is registered, which passed through the country’s parliament 66-1. On January 29, this year, in a historic ceremony hosted on board Celebrity Equinox, Francisco Vargas and Benjamin Gray became the first same-sex couple ever to be legally married at sea on a major cruise line.

"Celebrity Cruises has a long history of supporting the LGBTQ+ community, and I cannot think of a more important time in our history than right now to do all we can to support inclusion,” said Lutoff-Perlo. "This is one for the history books!"

Outside her role as CEO and President, Lutoff-Perlo actively participates in and lends her leadership to a number of regional, philanthropic and women’s organizations. She has received numerous awards for her contributions to gender equality, diversity and inclusion.