As often happens on January nights, bands of light rain swept over Honolulu Harbor, and the silhouette of the Coast Guard Cutter Walnut pulled away from the pier at Coast Guard Base Honolulu but for the final time. The cutter's presence was given away only by her navigation lights. Behind her, the skyline of downtown Honolulu shone brightly with Aloha Tower illuminated red against the twinkling city lights.

On deck, the cutter's crew worked diligently under the experienced eye of Chief Warrant Officer Hari Colton, the deck force department head, as they prepared for the long voyage. The seagoing buoy tender is en route to the Coast Guard Yard in Baltimore for her midlife overhaul. While in the yard, the cutter will enter an extensive maintenance period, and afterwards she will be re-homeported in Florida. Hawaii's replacement buoy tender - the Juniper - is currently at the Coast Guard Yard finishing up the same refit program.

It fitted well for Colton to be a part of the Walnut's final voyage out of Honolulu. Twenty years ago, as young Petty Officer 3rd Class Colton, he was part of the pre-commissioning crew who brought the Walnut, then brand new, to the Hawaiian Islands.

Colton was born in Tahiti, French Polynesia, and grew up on the Hawaiian island of Molokai. After graduating from Molokai High, he decided to see more of the world and believed the best way to do it was joining an armed service. He naturally gravitated toward the Coast Guard.

"Growing up, I've always been on the water, and my father always had some boat," said Colton. "He was a captain in the Merchant Marine before World War II and a chief boatswain's mate during the war. His stories and adventures he's been through made me want to do the same thing he did."

Following in his father's footsteps, Colton chose to become a boatswain's mate. He spent most of his career on cutters and will soon receive his Master Cutterman certificate in recognition of over 20 years of sea-time.

"I am thankful to the Coast Guard for allowing me to do what I enjoy doing," he said. "There were two periods in my career where I gave shore duty a try, but thankfully there are people that do not like sea duty allowing for gaps in cutter billets which I jumped at the opportunity to fill and short toured out of both shore units to get back afloat." 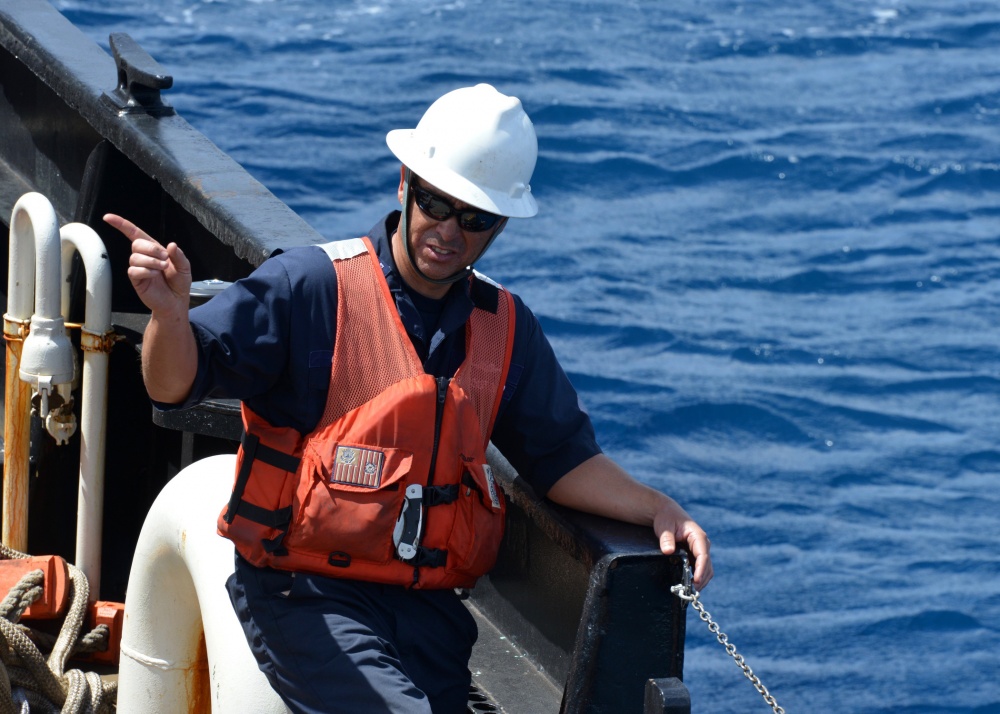 As a chief petty officer, just before Colton was about to retire from the service in 2013, the Coast Guard offered him a position as a chief warrant officer. He said this opportunity was the best way to remain at sea, a passion his family understands despite the time spent away from home. Though he did admit, it wasn't easy at times to be away from them.

"It's an understanding between my family and I," he said. "They know this is what I do and accepted that fact many years ago. I enjoy what I do so it balances just right. It is to the point now that if I'm in port for too long, I have this urge that tells me it's time to go back out to sea."

Colton served on the Walnut several times throughout his career, either as a full-time crew member or temporarily attached to the cutter. One of his favorite memories while aboard was in Kanton Atoll, Kiribati.

Back in 2011, the Walnut was on patrol off Samoa, and while returning to Hawaii she made a port call at the atoll. Colton is an avid surfer, and from previous trips he knew there was good surf to be had here. He thought he spotted such a spot, and after the cutter was tied up, he and two shipmates geared up and made the arduous trek to the location. Despite sighting sharks, Colton and his shipmates were determined.

"I wasn't going to not surf after all the effort we went through to get there, so I got in the water and splashed around," said Colton. "Once the coast was clear, we jumped in and got to the line up to surf knee high waves all the while conscious about what might be lurking below our feet. Totally worth it!"

To him, being able to surf at a place where only a handful of people have ever surfed before made the work aboard the cutter all worth it. This mentality is tied to one of the lessons he has learned over his long career. "Work hard, play hard," he said. "Do your best and make sure you have fun at what you do. If you don't, then you are doing something wrong."

Maintaining Hawaii's aids to navigation is a full-time job. Over the years, the crew of the Walnut has ensured the islands' maritime transportation system is safe for all waterway users.

Much like the cutters, buoys, and other aids to navigation require routine maintenance to ensure they remain in working order. If left unattended, over time, they will become dirty, rusty, or shift position due to strong seas, storms, or occasional collisions.

In preparation for the cutter's departure to Baltimore, the crew doubled its efforts over the preceding year to ensure the 137 aids they are responsible for are in good condition. During the crew's time away from Hawaii, the Coast Guard 14th District has developed contingencies should any significant ATON discrepancy arise.

The Coast Guard traces its ATON mission back to 1789 when Congress accepted control of the nation's lighthouses from the former colonies. Since that time, members like Colton strive to ensure America's waters remain safe for mariners. To him, there is something special about the mission.

"I like that it is a job that requires good honest laborious work [with] common sense rigging practices," said Colton. "Every buoy evolution is different in the sense that you never know what kind of difficulties or challenges you will encounter."

The day after the Walnut departed Honolulu for the final time, Colton and the crew reset the Kawaihae Light Buoy Number 4 just off of the big island of Hawaii. The buoy shifted from its original location, and the team reset it as a final act of farewell to the area and mariners before the long journey to Baltimore.

While Colton has lived and worked in many places throughout his Coast Guard career, Hawaii will always be his favorite. "I've been stationed in Guam, Seattle, and San Francisco or Alameda and visited many other places in the U.S., but Hawaii is by far the best out of all of them," said Colton. "The best thing about Hawaii is the warm water and the surf. Nowhere else in the continental U.S. can you catch north, south, east, and west swells."

This article appears courtesy of U.S. Coast Guard News and may be found in its original form here.