Over the last four years 20 incubators, accelerators and clusters focused on the Blue Economy and blue technology have formed in North America, bringing the current total to 26.

You may be asking yourself: “what the hell is the Blue Economy?” It’s a good question, and if you ask 10 different people you’re bound to get 10 different responses. Using the World Bank’s definition, “the Blue Economy is sustainable use of ocean resources for economic growth, improved livelihoods and jobs, and ocean ecosystem health.” It includes many different activities, including: renewable energy, fisheries, maritime transport, tourism and defense, just to name a few. The World Bank estimates that the Blue Economy contributes roughly $1.5 trillion to the global economy each year; very few other natural resources can claim as large an impact.

With so many industries and stakeholders that have a vested interested in the Blue Economy, some regions across the world have created marine clusters. A cluster is “a geographical proximate group of interconnected companies and associated institutions in a particular field, linked by commonalities and externalities,” according to management author Michael Porter. In the Blue Economy, ports serve as natural hubs for clusters due to the obvious infrastructure and businesses that they support, so it should come as no surprise that each cluster in the U.S. is near, or centered on, a major port.

Currently, there are seven established maritime clusters in the U.S. and one in Canada. They include: The Maritime Alliance in Southern California, the Marine Industries Science & Technology (MIST) Cluster in the Gulf, the Alaska Ocean Cluster Initiative, the Great Lakes Commission (not a traditional cluster, but it serves the same purpose), Cleveland Water Alliance in the Great Lakes region and the Washington Maritime Blue initiative in the Pacific Northwest. There are several groups that lay claim to the maritime cluster in the Northeast. Further to the North in Newfoundland is another ocean cluster named Oceans Advance.

The Maritime Alliance, along with several others, has taken the cluster idea one step further and is helping organize several international maritime clusters together. This BlueTech Cluster Alliance was formed in January 2017 and it includes nine different clusters from seven different countries.

Growth in the Blue Economy is driven by new ideas and businesses generating revenue. We call these startups. It is difficult to count and track young companies like startups, but it is relatively easy to track the institutions that support them: incubators and accelerators for example. 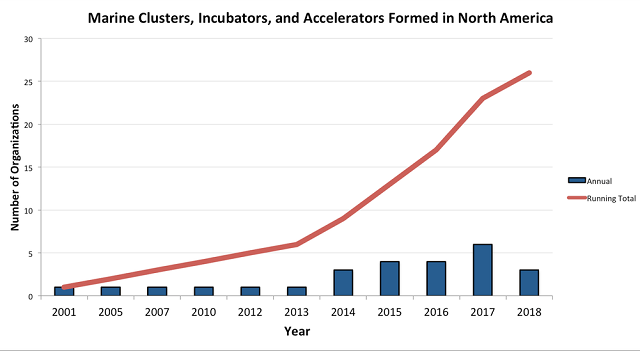 Incubators and accelerators serve a similar purpose to startups that reefs in an ocean serve for young marine creatures. A reef provides a sheltered space for marine creatures early in their lives. Incubators and accelerators provide a safe-haven for young companies to test their business models, build relationships, and access cheap resources. This allows the startups that live within these institutions to focus on growth before they go it alone.

The line dividing incubators and accelerators has become blurred over time and there are no hard and fast rules that characterize each. Generally speaking, an incubator supports a company in its early stages for several years while the startup attempts to turn an idea into a business. Most incubators are run as non-profits and generally don’t take equity in the startups they host.

An accelerator helps a business with developing a marketable product or service in its more adolescent stages. This is a more intense phase of growth and most accelerators are typically only several months long in duration. Accelerators are more likely to take some equity in the companies that they host in exchange for the services they provide (legal, human resources, finding investors, accounting, etc.).

Using the U.S. Department of Energy’s Incubatenergy network as a comparison, there are 35 incubator programs in the U.S. just focused on clean tech (at least that are within the network). The Blue Economy is commensurate in scale to the clean tech sector (and overlaps as well), so I would expect more maritime focused incubators and accelerators to develop in the U.S. in the coming years as the industry matures.

The various operating bodies for these different incubators and accelerators appear to consist largely of non-profits, universities, or local governments. A similar trend started in the clean tech sector, but as the technologies matured large companies like Enel, GE, and even Wells Fargo saw the need to stay abreast of the latest developments and began creating their own accelerators and incubators.

The lack of large corporate entities running their own blue tech accelerators or incubators, or even partnering with existing ones, is indicative of a nascent Blue Economy, but also of the growth to come. Across the pond in Europe, the maritime startup scene is more developed and there are several corporate partners involved, including the likes of Shell, Maersk, Wärtsila and Deloitte. Boeing is a tenant (not a partner) at the AltaSea incubator in Los Angeles and is one of the few major corporations I’ve come across involved in a marine tech incubator in the U.S. What major U.S. corporation will be the first to create a dedicated BlueTech incubator?

There are many different focuses of these incubators, accelerators and clusters. Some choose to cover a broad range of topics with catchall phrases like “blue technology,” while others are more specific in their focus areas, listing topics such as coastal recovery or marine transportation. Surprisingly, over 50 percent of the groups listed aquaculture as a key focus area. While aquaculture has been relatively slow to develop in the U.S. in comparison to other countries, it does point to the fact that many groups see its potential.

Out of curiosity I looked at Google Trends using “aquaculture” as the search term. The result is below. The states shown in the table have the highest relative search interest in aquaculture over the past five years. Unsurprisingly, these are some of the same regions that have seen a growth in marine focused incubators and accelerators.

I was curious why so many of these groups formed around the same time, so I asked a few groups why they thought the timing was ripe. According to Mike Jones, Founder of The Maritime Alliance: “There is increasing interest globally in the Blue Economy and BlueTech as humans rediscover the importance of the ocean. Most mega-cities are on or near the ocean or rivers, because water transit is how we moved goods and people around globally until 200 years ago and freight still mostly moves that way. Problems like ocean warming, plastic gyres and ocean rise have us looking at the ocean again since it is our past and our future as we address human needs for food, water, energy, medicine and coastal real estate.

“This is manifesting itself in events like the first ever Ocean Conference by the U.N. in June 2017, increasing attendance at The Economist annual World Ocean Summit and Our Ocean conference started by Secretary of State John Kerry, BlueTech Week that The Maritime Alliance (TMA) puts on annually, and in the formation of cluster organizations globally.”

Sandra Whitehouse, Chief Scientific Officer at AltaSea had this to say: “The global ocean economy is expanding as the world’s population grows (with associated needs for food and energy) and new technologies improve access to ocean resources such as offshore aquaculture and renewable energy. The model of using incubators and accelerators to develop and bring new technologies to market has been proven in the fields of health care and biotechnology. It only makes sense that the blue economy and blue technology in particular employ this model.”

Mark Huang, one of the co-founders of SeaAhead, a new BlueTech incubator in Rhode Island is thinking along similar lines: “A wide range of factors are coming into play that make the sector ripe for new innovation paradigms, just as we are seeing in other traditional verticals like automotive, energy and food: from new regulation in the ship smokestack, ballast water invasive species regulation to the introduction of new Tech – cyber, data science and IoT logistics – to innovation for offshore wind (MA and RI on May 24th announced 1.2GW of new awards). Further, Smart City is now being integrated into the waterfront  from a systems perspective and of course the Living Ocean: sustainable seafood and aquaculture.”

The Blue Economy may be a relatively new idea, but it is growing quickly. To see so many groups that are dedicated to bringing in fresh ideas and disruption into industries like maritime transportation, which have historically been mired in tradition, is a welcome change. Get ready for the blue tech revolution.

David Hume is Author of the website: The Liquid Grid.