To understand the maritime security issues afflicting Ghana, it is instructive to first look at Nigeria. Nigeria is the powerhouse of the region and a major trade corridor for neighboring, land-locked nations such as Niger and Chad.

A lot of the wealth generated within Nigeria spreads across to its neighbors, and with a newly elected government, it is likely to see a boost in economic development.

That means more ships, travelling to and from Nigeria, will pass through the waters of Ghana; more ships that are potential targets in a region where many incidents go unreported, says Jonathan Stamper, Director of security specialist Watchwood Resources Limited.

“Nigeria has changed recently. Most people in the region that have a touch on what is going on there are expecting there to be a new wave of crime, not necessarily just piracy on the high seas, but all sorts of crime that Nigeria is going to have to deal with in its immediate future,” he says. That wave of crime is expected to reach Ghana.

Watchwood has been active in the security of the region, on land and at sea, and Stamper says that Ghana is one of the more politically stable countries there. People are keen to invest in the country, and Ghana itself is undergoing a lot of development, including in the oil and gas industry.

Up until now, Ghana has not allowed foreign private maritime security companies to provide personnel on ships in its waters. With an eye on developments in the region, though, the government has realized that it has something to gain from adopting European standards of maritime security.

“We saw a way to bring value to Ghana by working to set up an anti-piracy solution from a commercial perspective,” says Stamper.

Watchwood is compliant with ISO9000 and international anti-bribery and corruption laws. That was of critical importance to the company’s deal with Ghana authorities.

“One of the key provisos for any government in that part of the world is audit, control, safety and security for all of their territory and state boundaries,” says Stamper. Ghana's president, John Dramani Mahama, was appointed the chairman of Economic Community of West African States (ECOWAS) in 2014, and he has been pivotal in the development of a maritime security framework for the region.

What Stamper is initiating in Ghana under Mahama’s government is unique in ECOWAS. Stamper is bringing qualified U.K operatives to work with and train Ghana police officers. That way, as well as providing security services, the company is also building future capacity within Ghana.

“We are increasing the police’s mandate to deal with many issues in their waters including piracy, drugs running, human trafficking and illegal fishing. There’s always been issues with foreign nationals bearing arms in anybody’s territorial waters, and that’s the crux of why Watchwood has been given the authority to go ahead with this project,” says Stamper.

“We’ve found a way to provide the audit and control processes that the security apparatus of Ghana is happy with. They are always going to be in control at every stage.”

All the training modules developed by Watchwood meet the standards that would be required in the U.K., including training in the International 100 Series Rules as model rules for the use of force.

The project has been established in the port city of Tema, and the first round of training is expected to be completed soon. Watchwood security operatives will then be taking to the waters of Ghana, assisting the local police make the country’s waters safer.

“The strategic part of the project is to show that it is viable for commercial entities to work in the region,” says Stamper. “For Ghana itself, it is a demonstration that they can be dynamic first movers in regional projects. Ghana has a good reputation across the region, and there are a lot of other countries in the region finding themselves dealing with the prospects of offshore oil and gas and other development.”

Like Ghana, Stamper hopes that other countries in the region will take notice. “The key thing for us as a commercial company is to try and get some sort of resolution in the region for the mariners and how they view having to work in the region.” 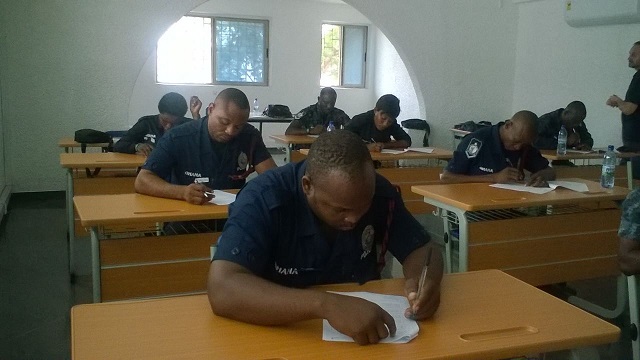