Doyle: Dredging is Going to Thrive 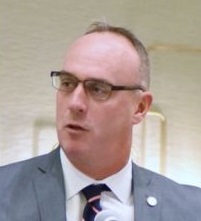 William P. Doyle, CEO & Executive Director of Dredging Contractors of America (DCA), says the industry is going to thrive, and he intents to ensure the Jones Act continues to do the same.

Please tell us about your role as CEO of DCA:

I am the face and voice of the association. When taking on this job, I promised to raise its profile and that’s what I am doing. We have a great story to tell.

Right now, most of my day is consumed with partnering with U.S. Army Corps of Engineers, educating congressional leaders, advocating for funding for beach nourishment, harbor deepening and coastal restoration projects, and interacting with private sector companies.

How important is the Jones Act for the American dredging industry?

I am a big supporter of the Jones Act. I began my career in the maritime industry at the age of 19, as a cadet breaking out ships for the first Gulf War at the old Beth-steel, General Dynamics Shipyard in Quincy, Massachusetts.

A strong and vibrant U.S. Merchant Marine is integral to America’s national and economic security, of which the U.S.-flag dredging industry plays a vital role. I believe in my companies and their business models of building ships and vessels in U.S. shipyards, registering their vessels in the U.S. and staffing them with American officers and crew. I intend to vigorously defend their investments by helping to preserve the Jones Act into perpetuity.

What are the key objectives of DCA for 2019?

A key objective for 2019 is to work closely with the U.S. Army Corps of Engineers on dredging schedules. The Army Corps has an aggressive two-year and five-year work plan. There is more funding now for dredging than there has been in decades. This means that dredging assets and equipment must be scheduled appropriately, and this includes a balancing of beach nourishment work with harbor and channel maintenance dredging while at the same time being ready for the annual cresting of the Mississippi River.

Another important objective is reducing the frequency of striking submerged pipelines. I am the Chairman of the Industry-Government Pipeline Task Force. The primary focus of the Pipeline Task Force, first and foremost, is to prevent injuries and save lives in the dredging industry. We are first addressing Army Corps regulated dredging projects in federal navigation channels. The types of pipelines for this phase include natural gas and liquid lines.

Finally, the task force is focused on finding industry solutions and best practices rather than implementing regulations or enacting laws. The task force includes U.S. dredging companies and the U.S. Army Corps of Engineers, the Pipeline & Hazardous Materials Safety Administration, the State of Louisiana Pipeline Safety Division, the Coastal and Marine Operators Pipeline Industry Initiative and representatives and member companies of the American Petroleum Institute, the Interstate Natural Gas Association of America, and the Louisiana Mid-continent Oil & Gas Association.

What does the Senate's vote in favor of Water Resources Development Act 2018 mean for DCA?

With President Trump’s signing in October of America’s Water and Infrastructure Act / Water Resources Development Act (AWIA/WRDA) it closes the loop on a hugely successful bipartisan legislative year. It is not just WRDA though. This has by far been the most consequential year of infrastructure related legislative activity that I have ever seen or been involved with securing. It’s huge.

Although infrastructure improvements for the U.S. was not addressed in a single bill, much was taken care of in several individual and wipe sweeping legislative measures enacted into law including - FAA Authorisation; Minibus - Energy & Water, Military Construction, Veterans Affairs and Legislative Branch, 2017 Disaster Relief Supplemental Appropriations Bill, Bipartisan Budget Omnibus Act. All these laws combined provide for billions of dollars for dredging activities.

Where do you see DCA in five years?

The dredging industry is going to thrive. We have enough work and construction projects for the foreseeable future and that includes outwards of five years. We’re going to make sure projects are completed, working closely and partnering with the Army Corps. The DCA is also going to help eliminate striking submerged natural gas and oil pipelines. Our pipeline task force is going to develop a best practices manual over the next year related to dredging in areas where buried pipelines exist.

The U.S. is turning its attention to the beneficial use of dredge material. And we’re serious about it. We’ll be spending a lot of time advocating for the beneficial use program. Finally, the DCA is going to continue highlighting the capital expenditures and investments that the U.S. dredging companies are making through building new Jones Act vessels.

What role does digitization have in dredging operations?

Digitalization is here. The hopper dredges, cutter head suction dredges, tugs, dump scows, survey boats, you name it … they are all equipped with digital technology or moving in that direction. Here’s one specific example: recently, I had the opportunity to visit the start-up operations for what is commonly referred to as Phase II of the Boston Harbor deepening project.

I was particularly impressed with the new technology that Cashman Dredging has designed and implemented to prevent inadvertent placement of dredge material in non-authorized ocean disposal sites. Cashman Dredging set out to find a solution to the human error problem of accidentally discharging dump scows outside of the designated dump sites. What they came up with is the Scow Geofence System. The system itself is comprised of a small computer and a GPS receiver that is connected to the scow controls. The Scow Geofence System utilizes a relay that connects it to the scows programmable logic controller (PLC). The PLC controls the communication, engine start and stop and the sequencing of the hydraulics for the split hull scow.

Basically, the Scow Geofence System does not allow a scow to dump its dredge material unless the barge is inside a predetermined geographic zone, or so-called “geo-fenced” area. Even if a crewmember activates the scow’s dump switch, the barge will not split open if the vessel is not within the geographically fenced area. The vessel must travel into the geo-fenced area for the dredge material to be discharged.

More to the point, the Scow Geofence System locks the PLC control of the scow-opening process within seconds of the GPS antenna transiting outside the predetermined geofence ocean dump site. Notably, there have been no accidental discharges of dredge material since implementation. This is all good for the operator, regulator and the environment. It’s quite likely that geofencing for dump scows will become an industry standard.

With a Degree in Law and Marine Engineering, Doyle initiated his career at a shipyard in Quincy (Massachusetts) breaking out and laying-up ships during the first Gulf War. After he graduated he sailed as an Officer in the U.S. Merchant Marine, in both the domestic and international trades for ten years, gaining valuable experience at sea. He then moved on to serve as Chief In-house Counsel and Director of Government & Legislative Affairs and later as Chief-of-Staff with the Marine Engineers’ Beneficial Association and Co-Counsel for the American Maritime Congress.

In 2008, Doyle was appointed under the George W. Bush Administration as the Director of Permits, Scheduling & Compliance for the Office of Federal Coordinator for Alaska Natural Gas Transportation Projects where he managed the pre-filing and permitting activities of 24 federal agencies including the Army Corps, NMFS, DOT and DOI agencies.

William Doyle was nominated and appointed twice by President Barack Obama and unanimously confirmed twice by the U.S. Senate as a Commissioner to the U.S. Federal Maritime Commission (FMC) where he served under the Administration for four years. He remained onboard with the Donald J. Trump Administration for an additional year, taking on his current role at DCA.