The Mexican government has intervened to prevent a potentially dangerous confrontation by fisherman protesting the presence of Sea Shepherd vessels.

Sea Shepherd is currently in the Sea of Cortez to protect the near extinct vaquita porpoise and the endangered totoaba bass. The campaign is being run in partnership with the Mexican government.

Protesting fishermen, led by one of San Felipe’s fishing cooperative leaders, held a demonstration on March 26 where they threatened to burn Sea Shepherd ships if they were still in the area by Thursday, March 30 at 14:00 hours.

At the demonstration, the fisherman and their leader took a small local fishing boat, known as a panga, painted Sea Shepherd’s name on it, and burned it in the streets of San Felipe. 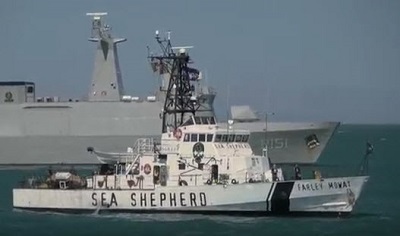 The demonstration ended with the leader promising to attack the Sea Shepherd crew with 200 pangas on March 30. On that day, Mexican Navy vessels acted as escorts for the organization’s vessels Sam Simon and the Farley Mowat, and on shore police screened fishing boats before allowing them to launch in to the sea.

Sea Shepherd estimates that around 60 pangas assembled in the harbor, but none set sail towards Sea Shepherd vessels.

A temporary restraining order issued against the fisherman on March 28 by the Attorney General’s office was ratified by a judge on April 5. The fishermen and their group leader were forbidden to speak, threaten and harass campaign leader and Sam Simon Captain Oona Layolle and the Sea Shepherd crews.

Sea Shepherd says that poachers who set banned gillnets that trap the vaquita, totoaba and other marine animals are angry that Sea Shepherd is working with their government to remove the nets. The totoaba bladders fetch $20,000 a kilo in China, a price that has attracted individuals tied to organized crime and drug smuggling to the trade, says the environmental organization.

Illegal fishing has caused vaquita porpoise numbers to drop to less than 30, leaving the world’s smallest porpoise on the brink of extinction. In March, Sea Shepherd found several dead vaquita floating in the area.

Sea Shepherd uses drones to locate the illegal fisherman and then notifies the Mexican authorities of their coordinates, which has led to arrests.