The ice-breaking LNG carrier Vladimir Rusanov completed her first LNG loading operation at Sabetta port last week. The newbuild was ordered by MOL and China COSCO Shipping Corporation and is the first of three vessels that will sail under a long-term charter contract to transport LNG from the Yamal project.

The vessel left the Daewoo Shipbuilding & Marine Engineering (DSME) Okpo yard after her naming ceremony on Dec 21, 2017 and headed to the Arctic Ocean through the Suez Canal for ice trials.

Constructions of the second and the third vessels is underway, and they are expected to be delivered at the end of September 2018 and September 2019 respectively. 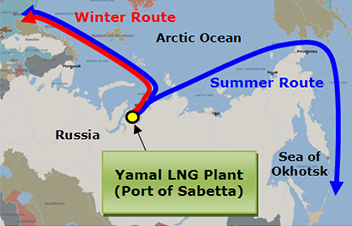 The Vladimir Rusanov can sail in seas with ice up to 2.1 meters (seven feet) thick. She will transport LNG from the Yamal LNG plant at Sabetta to worldwide LNG markets throughout the year. She, and her sister ships, will also be able to sail on the Arctic Sea Route to transport LNG to East Asia via the Bering Strait during the summer months.

The Arctic is estimated to hold 13 percent of the world's undiscovered oil resources and 30 percent of its undiscovered natural gas resources, according to an assessment conducted by the U.S. Geological Survey. MOL says a second project in the area will give further momentum to stable resource procurement for Japan from the Arctic Ocean via the shorter Northern Sea Route. Furthermore, it is anticipated that global demands for LNG as a clean energy will increase at an annual rate of five percent over the next 10 years. China, India and Southeast Asia are expected to see a large increase in LNG imports, and demand from Europe is expected to rise due to a recent decrease in its intra-regional production of LNG.