What Does the Law of the Sea Say About the HMS Defender Incident?

There are conflicting accounts from the UK and Russia about an incident off Cape Fiolent on the Crimean peninsula on June 23 when Russia’s defense ministry said its aircraft had fired warning shots at the British destroyer HMS Defender to expel it from Russia’s claimed territorial sea.

The geopolitics that might lie behind the episode are for others to debate, but having credible legal arguments is always important. The UK’s Ministry of Defence said on Twitter:

“Innocent passage” for foreign ships is the main qualification on a coastal state’s otherwise untrammelled sovereignty over its territorial sea of 12 nautical miles. Several provisions are devoted to it in Part II of the 1982 United Nations Convention on the Law of the Sea (UNCLOS), to which both the UK and Russia (as well as Ukraine) are party.

Under Article 17 of UNCLOS, innocent passage is the right to proceed through another country’s territorial waters without interference. Article 18 defines “passage” as navigation through the territorial sea of a coastal state without calling into one of its ports – as HMS Defender was doing – or to or from the internal waters of a state. It must be “continuous and expeditious,” without stopping and anchoring, except in so far as is incidental to ordinary navigation, or because of force majeure or distress, or in order to render assistance to another vessel in distress.

Nothing suggests that HMS Defender’s passage was anything but continuous and expeditious. As for what is “innocent,” UNCLOS Article 19 equates this with not being prejudicial to the peace, good order and security of the coastal state, and contains an exhaustive list of prejudicial acts, including use or threat of force, weapons exercises, defense- or security-related information-gathering, propaganda, smuggling of goods or people, launching, landing or taking on board aircraft or military devices, fishing, wilfully polluting and a few others.

UK within its rights

All of this points to the UK being within its rights to send its ship through the territorial waters off the Crimean peninsula. Notably, there is no requirement that innocent passage must be done for a particular purpose, nor does it need justification in terms of the directness of the route from port of origin to destination (although a glance at the map shows that passing close to Crimea is indeed the shortest way from Odessa to any Georgian port). 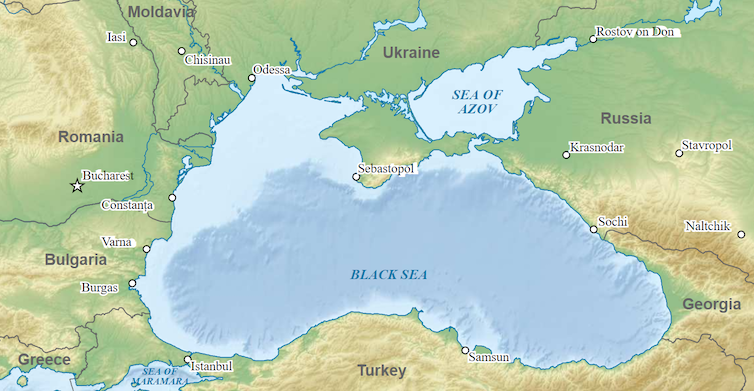 Black Sea: the waters off Crimea are part of the route from Odessa to any Georgian ports. Wikimedia Commons, CC BY-SA

So far there has been no accusation from Russia that HMS Defender was engaged in any of the acts that by UNCLOS Article 19 render passage non-innocent, which would have triggered Article 25 permitting the coastal state to take the necessary steps in its territorial sea to prevent passage which is not innocent. It seems to have been its mere presence that Russia found objectionable, possibly because HMS Defender was too close for comfort to the sensitive naval port of Sevastopol.

The UK maintains that the ship was in a recognized sea lane. This appears to be an indirect reference to UNCLOS Article 22, which permits the coastal state to “require foreign ships exercising the right of innocent passage through its territorial sea to use such sea lanes … as it may designate or prescribe for the regulation of the passage of ships”.

Sea lanes off southwestern Crimea were already included in the 2013 edition of the Ships’ Routeing publication of the International Maritime Organization (the UN specialized agency for shipping), the last that predates the 2014 Russian takeover of Crimea. The current (2019) edition is behind a paywall, but it would not have been in Russia’s interest to alter the lanes since then, as that would invite the question of whether it has lawfully acquired territorial title to Crimea, answered resoundingly in the negative by UN General Assembly Resolution 68/262.

A different rule for warships?

One possible counterargument would be to say that warships do not in fact have the right of innocent passage, only merchant ships. But this is a minority view and unconvincing, as it would make nonsense of much of the relevant provisions of UNCLOS. Many of the acts identified as prejudicial under Article 19 can in practice only be done by warships, yet there is no point including them in this list if warships do not benefit from the right in the first place.

Moreover Russia – which, in the eyes of international law is considered as a “continuator” state to the former Soviet Union – is on record as taking what one might call the orthodox view. The 1989 USA-USSR Joint Statement on the Uniform Interpretation of Rules of International Law Governing Innocent Passage confirms that:

All ships, including warships …, enjoy the right of innocent passage through the territorial sea in accordance with international law, for which neither prior notification nor authorization is required.

The 1989 statement, on which all states can rely, goes on to say that a coastal state "which questions whether the particular passage of a ship through its territorial sea is innocent shall inform the ship of the reason why it questions the innocence of the passage, and provide the ship an opportunity to clarify its intentions or correct its conduct." No exchange of this type has been publicly released. So it is not clear why Russia reacted as it did against the passage of HMS Defender, and the UK’s legal position, at least on the facts as known, appears strong.

But if the aim of the passage was to underline the UK view that the Crimea belongs to Ukraine and not Russia, given the reference in the Ministry of Defence statement to HMS Defender being in Ukrainian territorial waters, this is misconceived, as it cannot possibly advance Ukraine’s claim. It might even be counterproductive, by giving an opening to an argument that the passage, if undertaken predominantly for propaganda purposes, becomes non-innocent under Article 19.

For the whole point of innocent passage is that, as a right, permission does not have to be sought for it, which makes it irrelevant to which state the territory in question belongs. The same, incidentally, goes for the South China Sea, where – even now – the Royal Navy is sending a carrier group. Innocent passage within 12 nautical miles of any feature clear of the water at high tide is a right irrespective of which of the claimants has the better case for territorial title.

The only difference is that one of them, China, is the leading proponent of the view confining innocent passage to merchant ships. So – bearing in mind the qualification about propaganda – making a demonstration of passing through without seeking any claimant’s permission does actually serve a purpose there.

This thus calls into question the wisdom of an operation which has predictably annoyed Russia – assuming that was not in fact its sole aim. But it does nothing to bolster Ukraine’s claim, however worthy a goal it might be to act in support of the UN’s rejection of any change in status of Crimea in 2014.

So in future the UK would be well advised to avoid relying on Ukrainian “permission” as a justification. This would only undermine the innocent passage rule, as one imagines the US and perhaps others are forcefully pointing out to the UK behind the scenes.

Andrew Serdy is Professor of the Public International Law of the Sea at University of Southampton.