We Can't Scrap Our Way Out of the Crisis

For many decades, shipping companies worked together and cooperated in a way that is not permissible under today's understanding of antitrust law. The shipping companies formed organizations that were closed to the public and which decided on matters like prices, capacity, market share, allocation of customers and even division of profits. These groups were called "conferences" (synonymous with trade shows, but not the same). The conferences, in effect, exercised a kind of oligopoly-power by reducing competition.

In Europe, shipping conferences were abolished by EU Regulation 4056/86, which entered into effect October 2008. With this, the block exemption for shipping conferences ended and the market was given free rein to decide on prices and to regulate capacity. We are now nearly eight years in and living with the result, which is the "world's longest shipping crisis."

In my estimation, this crisis is by design.

With the repeal of EU Regulation 4056/86, the European Union decided that the drawbacks to consumers of having a largely self-regulating, cooperative shipping sector outweighed any overarching economic benefits. The block exemption, legally, was a carve-out in cartel law which permitted shipping companies to act in concert and limit competitive pressure. This worked well in the traditionally familiar and genteel European shipping sector, which placed more value on, so to speak, "smooth sailing" than on meeting quarterly growth targets.

The existence of EU Regulation 4056/86 was based on the argument that the "positive effects brought about by the agreement outweigh its negative effects and a fair share of these benefits is passed on to consumers." The repeal implied that the shipping conferences were not, in fact, sufficiently sharing the benefits of their privileged position.

In the wake of the October 2008 decision, newbuildings broke their long-term historic trend and experienced a sustained major jump. This growth has continued almost to this day. 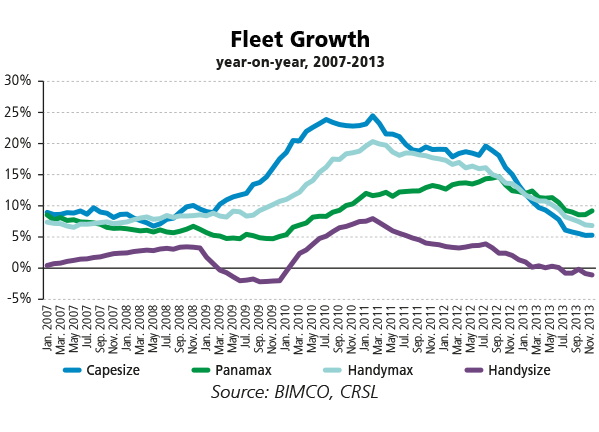 From peaks of 20-25 percent during the January 2010-January 2011 period, after a seven year spurt, growth has now finally somewhat moderated to its historic norm.

However, given the dismal capacity-to-demand ratio in the industry right now, even building at the historic norm is going to be too much because the rate of scrapping has fallen precipitously. Indeed, most older ships have already been mulched.

Nevertheless, the industry's optimism nobly refuses to be extinguished. As Marcus Tullius Cicero said, "No man is so old that he does not think he could live just one more day." 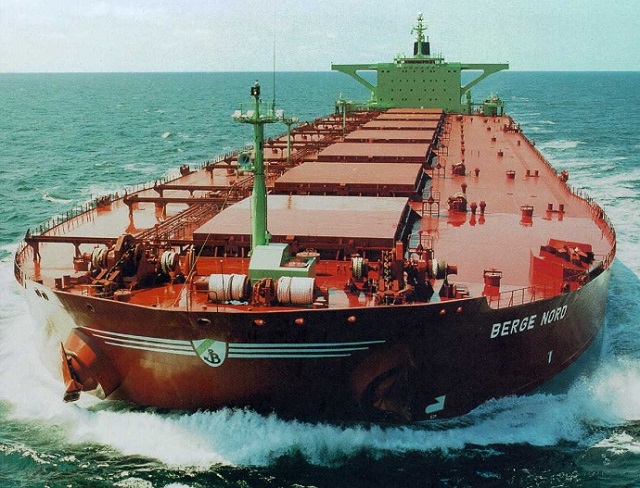 A series of articles in the maritime press about dry bulk shipping asserts that the dry bulk market is in a trough right now, but that a recovery is due. 89 percent of respondents to a survey estimate that recovery will take "a minimum of one year," while 54 percent said it would take "at least three more years". Among shipowners the mood was even more muted as 73 percent said the market would need 3-5 years to improve.

I have argued that as long as cost pressure due to unfettered competition is relentless, there is a compulsion to exploit even very marginal cost savings to gain a relative advantage. Even a slightly larger or more efficient vessel or, for example, a slight reduction in crewing expenses will allow survival amidst seemingly permanent ultra-low freight rates. I have unfortunately had to witness many of my students financially suffer and struggle to get jobs due to the continued outsourcing of ship's crewing to low-wage countries with worse labor standards.

The drive to accommodate such ultra-efficient mega ships includes efforts to dredge the Elbe to a depth of around 17 meters, costing upwards of 750 million euros and leading to the usual environmental collateral damage - not to mention making it more difficult for my clients to navigate into and out of Cuxhaven because deeper rivers generate increased current.

Also, remember that new ships entering into the market with state of the art fuel efficient engines, fewer crew members due to more automated systems, etc., will lead to yet another round of scrapping in due course when they begin to put cost pressure on current freight rates.

I believe that deregulation is creating a bit of a beast - the intention in ending the conferences was to generate competition and lower freight rates. The spectacular success of this attempt has, on the other hand, led to an oligopoly in the traditionally owner-diverse shipping sector. Small actors have been entirely wiped out, and mid-sized actors are fighting for their lives against behemoths like Maersk, MSC, the Asian lines and others.

Big actors can afford to constantly launch new, ultra-efficient capacity to drive less well capitalized competitors out of the market. And the resulting consolidation, if not stopped, may eventually leave shipping in the hands of a few big players, with the remaining mid-sized actors in niches.

If this were to happen, we would lose part of our tradition and a vibrant economic sector.

The consolidation of ownership is a further anti-competitive issue that has been sidelined by the current capacity-oriented discourse on shipping, but in fact, existing legal provisions do offer a possible approach to get a handle on the problem. Offering items at below their cost is an issue addressed under German law and is a practice that is prohibited in retail if the goal is to drive smaller competitors out of the market and establish a dominant market position.; this is, analogously, what is going on in shipping. The risk of big box stores creating a retail monoculture is well understood, and the same concern applies to the shipping sector.

So far this year, 283 ships totalling 21.8 million deadweight tons were scrapped, according to Italian shipbroker Banchero Costa. These ships are not small, either: amongst the 283 ship total were 77 Capesize vessels, 52 Panamaxes and 49 Supramaxes.

Even a good scrapping year like this is juxtaposed with 183 newbuildings during the period running from January-July 2015... and since the big players are already in a better position to finance launching of new ships, each newbuilding further consolidates the liner shipping market. The smaller companies have to increasing specialize to survive. I am also skeptical that low freight rates will continue once the consolidation in liner shipping has progressed.

I admire the optimism displayed in recent articles, but even in one, we get a taste of the future:
“Since the beginning of 2015, a total of 397 vessels joined the global bulker fleet, which is projected to grow by two percent this year, with an estimate of a five percent growth in 2016 and two percent in 2017, Bancosta said.

As a result, additional fleet capacity coupled with a likely slowdown in scrapping activity, stemming from higher freight rates, may lead to another oversupply gridlock crumpling the market’s full recovery.”