Cold-Water Rescues in the Battle of the Atlantic

“By the way, Admiral [Edward “Iceberg”] Smith recently commended the Escanaba, its officers and men, for brilliant rescue work. The ship saved about 150 men who were cast into a very cold sea. Most of the men were helpless due to the cold, their hands and feet were frozen, many were unconscious, and only one group were in a boat.” 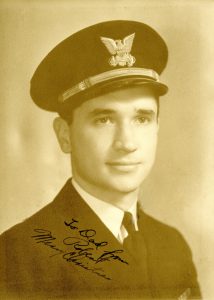 Born in 1915, Bob Prause grew up in in Norfolk, Virginia, where he attended Matthew Fontaine Maury High School and was an active member of the math, science and literary clubs. After a year of studies at Norfolk’s Old Dominion University, Prause followed his passion for technical studies and entered the Coast Guard Academy with the class of 1939. Prause graduated from the Academy then served aboard the cutters Modoc and Onondaga.

In early 1942, Prause shipped out as executive officer aboard the Escanaba, homeported in Grand Haven, Michigan. In June, Escanaba changed stations from the Great Lakes to Boston to become part of the Coast Guard’s Greenland Patrol. Over the course of the next year, Escanaba served as an escort for convoys steaming between U.S. and Canadian ports and on to Greenland in what may have been the worst sea and weather conditions in World War II.

On June 15, 1942, while Escanaba was escorting a convoy from Nova Scotia to Greenland, a U-boat attack sank the passenger steamer Cherokee, plunging nearly 170 passengers and crew into the bone-chilling seas. Within minutes, the shock of the water temperature had incapacitated Cherokee’s survivors. Desperate to rescue as many men as possible, Prause dangled head first over the side of the cutter while his shipmates held his legs. In spite of the threat of submarine attack and heavy seas, Prause and Escanaba managed to save 22 survivors.

With high seas and icy water, the obstacles to saving victims afloat in Greenland’s frigid waters seemed insurmountable. The challenge of saving as many lives as possible motivated Prause to develop a system of tethered rescue swimmers equipped with rubber exposure suits, which insulated the swimmers from the cold. Next, he worked with three crew members who volunteered to serve as swimmers. Prause drilled the men and their support crews so that the three swimmers and the retrievers on deck could perform their duties smoothly from the cutter’s rolling deck in blackout conditions. In his letter home, Prause briefly described his retriever system:

“. . . we used the Escanaba retriever method of rescue which I myself designed and tested out. A man in a rubber suit with a parachute harness about him and a line attached is sent over the side. The retriever swims out, ties on another line about the victim or raft and its hauled into the ship’s side.”

On Wednesday, Feb. 3, 1943, a convoy bound from Newfoundland to Greenland provided the first test of Prause’s system. Cutters Escanaba, Tampa, and Comanche served as escorts for a group of three steamers, including the U.S. Army transport Dorchester, which carried 904 passengers and crew. At 1:00 a.m., a torpedo ripped through Dorchester’s hull. The transport sank in 20 minutes, sending hundreds of passengers and crew into the icy waters.

By the time Escanaba arrived on scene, Dorchester had vanished into the frigid seas. Life preservers onboard the transport were equipped with blinking red lights to help rescuers locate floating victims at night. These red lights dotted the water’s surface for miles. The service required cutters to enforce blackout conditions during nighttime operations, and Prause’s swimmers donned their exposure suits while deck crews prepared to retrieve survivors. 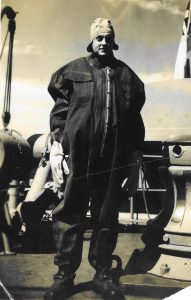 The tethered rescue swimmer operations were far more effective in recovering survivors than any previous attempts. Equipped with their exposure suits (left) the retrievers swam out to the Dorchester’s survivors while Escanaba’s deck crew pulled on board those still living. By the end of the eight-hour operation, the crew of Escanaba had saved 133 lives, far more than the 22 rescued from USS Cherokee. Prause’s tethered rescue swimmer system had proved a success.

The glow of Prause’s success proved short lived. In June, Escanaba joined cutters Storis and Raritan to escort a convoy bound from Greenland to Newfoundland. At 5:00 a.m. on June 13, almost a full year after the Cherokee rescue, Escanaba fell victim to a catastrophic explosion, believed by many the result of a torpedo attack. In just minutes, the cutter went up in smoke and left the water’s surface, taking 100 crew members down with it. Only three men survived the explosion, including Prause – now the victim and not the rescuer. The crew of cutter Raritan threw Prause a line, pulled him on deck and took him below for medical attention. After that, Prause lost consciousness and never recovered. Due to Raritan’s distance from land, he was buried at sea with full military honors. For his heroic efforts, Prause posthumously received the Navy and Marine Corps and Purple Heart medals.

Despite its success, Prause’s system of tethered rescue swimmers saw little use after the loss of Escanaba, but his invention served as one of the Coast Guard’s first successful cold-water rescue methods.

William H. Thiesen, Ph.D. is the Coast Guard Atlantic Area historian. This article appears courtesy of Coast Guard Compass and may be found in its original form here.