The Arctic has long been portrayed as a distant end-of-the-Earth place, disconnected from everyday common experience. But as the planet rapidly warms, what happens in this icy region, where temperatures are rising twice as fast as the rest of the globe, increasingly affects lives around the world.

On Dec. 14, 2021, a team of 111 scientists from 12 countries released the 16th annual Arctic Report Card, a yearly update on the state of the Arctic system. We are Arctic scientists and the editors of this peer-reviewed assessment. In the report, we take a diverse look across the region’s interconnected physical, ecological and human components.

Like an annual checkup with a physician, the report assesses the Arctic’s vital signs – including surface air temperatures, sea surface temperatures, sea ice, snow cover, the Greenland ice sheet, greening of the tundra, and photosynthesis rates by ocean algae – while inquiring into other indicators of health and emerging factors that shed light on the trajectory of Arctic changes.

As the report describes, rapid and pronounced human-caused warming continues to drive most of the changes, and ultimately is paving the way for disruptions that affect ecosystems and communities far and wide.

Arctic Sea ice – a central vital sign and one of the most iconic indicators of global climate change – is continuing to shrink under warming temperatures.

Including data from 2021, 15 of the lowest summer sea ice extents – the point when the ice is at its minimum reach for the year – have all occurred in the last 15 years, within a record dating back to 1979 when satellites began regularly monitoring the region.

The sea ice is also thinning at an alarming rate as the Arctic’s oldest and thickest multi-year ice disappears. This loss of sea ice diminishes the Arctic’s ability to cool the global climate. It can also alter lower latitude weather systems to an extent that makes previously rare and impactful weather events, like droughts, heat waves and extreme winter storms, more likely.

Similarly, the persistent melting of the Greenland ice sheet and other land-based ice is raising seas worldwide, exacerbating the severity and exposure to coastal flooding, disruptions to drinking and waste water systems, and coastal erosion for more communities around the planet. 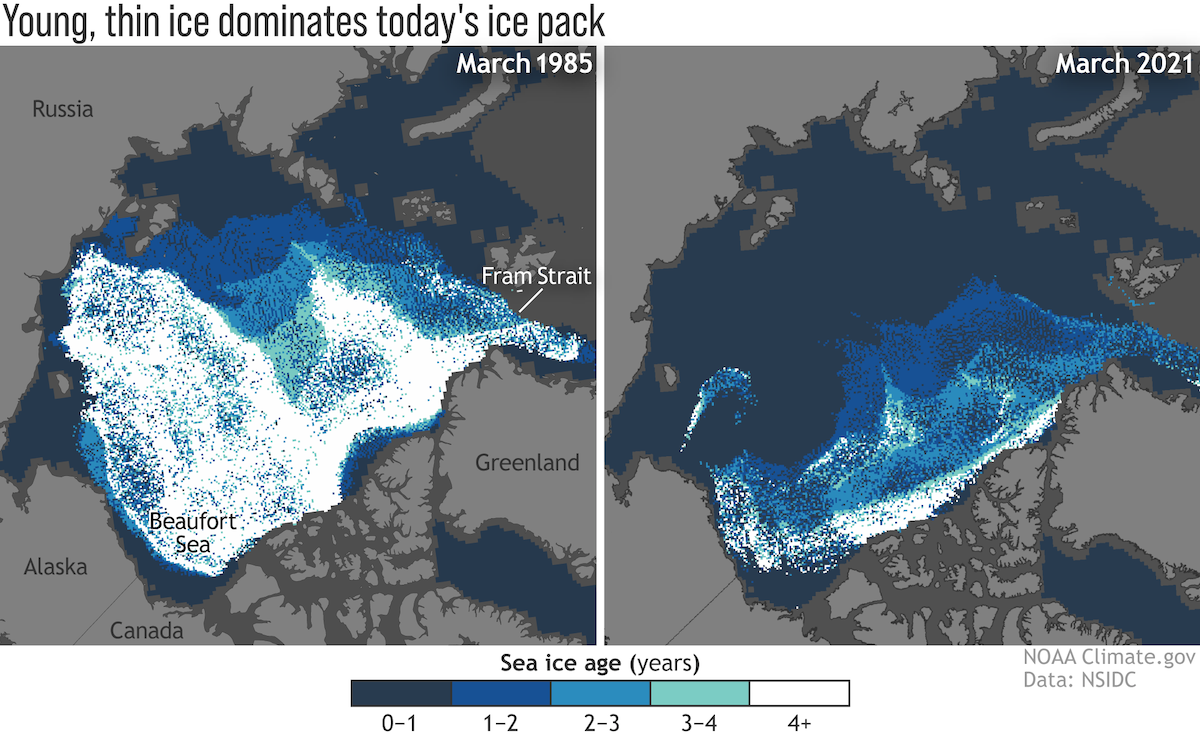 This transition from ice to water and its effects are evident across the Arctic system.

The eight major Arctic rivers are discharging more freshwater into the Arctic Ocean, reflecting an Arctic-wide increase in water coming from land as a result of precipitation, permafrost thaw and ice melt. Remarkably, the summit of the Greenland ice sheet – over 10,000 feet above sea level – experienced its first-ever observed rainfall during summer 2021.

These developments point to a changed and more variable Arctic today. They also give credence to new modeling studies that show the potential for the Arctic to transition from a snow-dominated to rain-dominated system in summer and autumn by the time global temperatures rise to only 1.5 degrees Celisus (2.7 F) above pre-industrial times. The world has already warmed by 1.2 C (2.2 F).

Such a shift to more rain and less snow would further transform landscapes, fueling faster glacier retreat and permafrost loss. The thaw of permafrost not only affects ecosystems but also further adds to climate warming by allowing previously once-frozen plant and animal remains to decompose, releasing additional greenhouse gases to the atmosphere.

This year’s report highlights how retreating glaciers and deteriorating permafrost are also posing growing threats to human life through abrupt and localized flooding and landslides. It urges coordinated international efforts to identify these hazards. More rain in the Arctic will further multiply these threats. 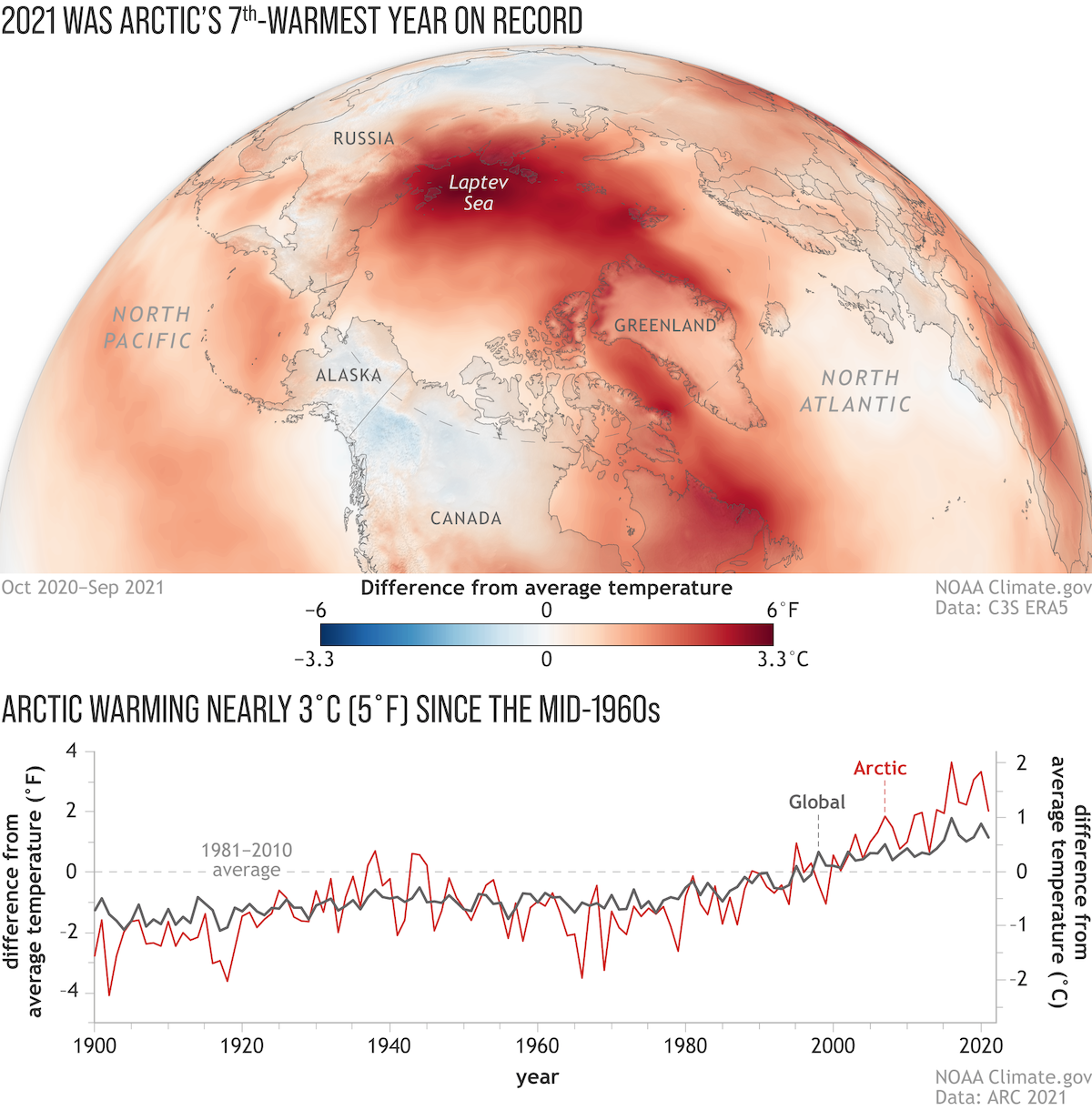 Observed changes and disruptions in the Arctic have bearing on everyday lives and actions worldwide, either directly or as stark reminders of a range of human-caused harm to climate and ecosystems.

An Arctic Report Card essay on beavers expanding northward into Arctic tundra to exploit newly favorable conditions is a case study for how species around the world are on the move as habitats respond to climate shifts, and the need for new forms of collaborative monitoring to assess the scale of the resulting ecological transformations.

An essay on marine garbage from shipping washing ashore on the Bering Sea coast, posing an immediate threat to food security in the region, reminds us that the threat of both micro- and macro-plastics in our oceans is a preeminent challenge of our time.

A report on shipping noise increasingly infiltrating the Arctic’s underwater marine soundscape, to the detriment of marine mammals, is a call to conserve the integrity of natural soundscapes worldwide. For example, a recent unrelated study found that noise caused by human activities and biodiversity loss are deteriorating the spring songbird soundscapes in North America and Europe.

Yet, an Arctic Report Card essay from members of the Indigenous Foods Knowledges Network highlights how, despite the continued climate threats to Arctic food systems, Alaska Indigenous communities weathered early pandemic disruptions to food security through their cultural values for sharing and “community-first” approaches.

Their cooperation and ability to adapt offer an important lesson for similarly struggling communities worldwide, while reminding everyone that the Arctic itself is a homeland; a place where large-scale disruptions are not new to its over 1 million Indigenous Peoples, and where solutions have long been found in practices of reciprocity.

An Arctic connected to the rest of the world

The Arctic Report Card compiles observations from across the circumpolar North, analyzing them within a polar projection of our planet. This puts the Arctic at the center, with all meridians extending outward to the rest of the world.

In this view, the Arctic is tethered to societies worldwide through a myriad of exchanges – the natural circulation of air, ocean and contaminants, the migration of animals and invasive species, as well as human-driven transport of people, pollution, goods and natural resources. The warming of the Arctic is also allowing for greater marine access as sea ice loss permits ships to move deeper into Arctic waters and for longer periods of time.

These realities illuminate the importance for increased international cooperation in conservation, hazard mitigation and scientific research.

The Arctic has already undergone unprecedented rapid environmental and social changes. A warmer and more accessible Arctic results in a world only tethered more tightly together.

Rick Thoman is an Alaska Climate Specialist at University of Alaska Fairbanks.