As part of the expansion, Damen’s client will increase its wharf in order to accommodate vessels up to 280 meters in length. For this, the port requires additional bollard pull. The ASD Tug 2411, with its 70 tonnes bollard pull, will replace two tugs from Port Nelson’s existing fleet.

The port have said they are pleased to be able to extend their relationship with Damen with the purchase of the new, still to be named ASD Tug 2411, so soon after purchasing the Damen ASD Tug 2310 Toia in 2016.

“Without exception our experience with the Toia has been a positive one,” said Port Nelson CEO Martin Byrne. “And we look forward to working with Damen to ensure the future towage needs of our business continue to be met and enable us to continue to facilitate regional prosperity in the Nelson, Tasman and Marlborough regions.”

Damen has built the ASD Tug 2411 according to its standardized philosophy of shipbuilding – which ensures clients of fast delivery of proven, reliable products. As such, it was available from stock, enabling Damen to deliver the vessel swiftly.

Though the vessels come as standard, Damen is always able to tailor them to meet the individual requirements of its clients. In this instance, this has involved the installation of a gangway to facilitate crew access in the up to four-metre tides experienced in the port.

Sjoerd de Bruin, speaking on the occasion of the contract signing, said, “It is a privilege to support Port Nelson with the increased tug capabilities they require for their port expansion. We wish the port and all those working there safe and successful operations.” 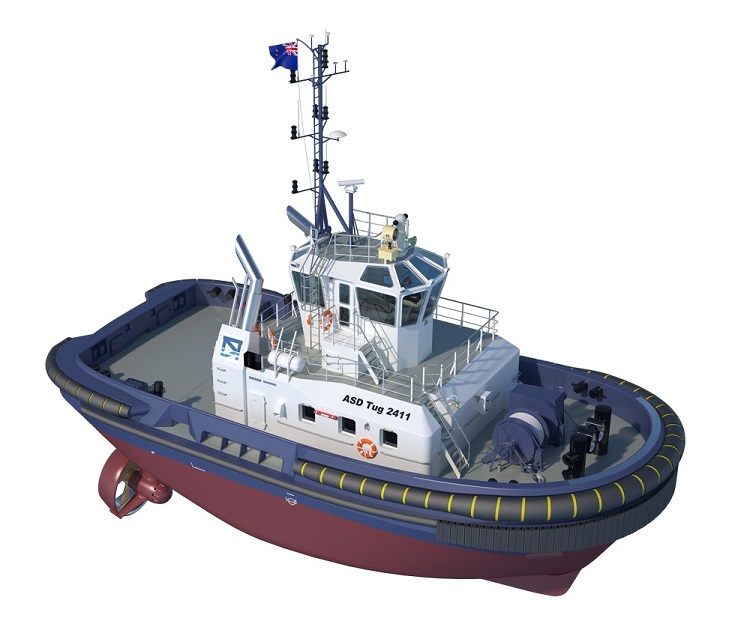