With challenging years within the offshore segment behind us, the fish carrier and hybrid ferry market has progressed. NES has experienced a great interest for Odin`s Eye DC grid system and battery/ hybrid solutions.  “We have managed to keep the optimism in a difficult market and continued developing existing as well as new products. NES` extra focus on new markets has resulted in the highest order reserve in NES` history proves that it has been a success,” says Tor Leif Mongstad, CEO in NES.

The ferries are to be built at Havyard Ship Technology, and this is the largest contract in NES` history. The delivery includes NES` ultra-rapid DC system, Odin`s Eye, which will secure reliable charging/discharging of the batteries.

“We are proud of the confidence Fjord1 has given us by choosing NES as the system integrator for these vessels. It shows that NES has the best technical solution and the competence required for these highly complex and advanced battery operated ferries,” says Stein Ruben Larsen, VP sales in NES. “The ferry distance Hareid - Sulesund is technically the most demanding all-electric distance offered in Norway,” says Larsen.

The process from the drawing board until complete specification of the vessels has been very demanding, but the interaction between designer (Havyard Design & Solution), owner (Fjord1) and system integrator (NES) has worked out very well. This makes us confident that the result will be a success.

Three of the ferries will be operating between Hareid-Sulesund and the other two Magerholm - Sykkylven. The ferries are 111 meters long and can carry 120 cars each. All the equipment on board is prepared for battery use but ready with full diesel operation should the battery fail.

Furthermore, NES has signed another contract for the delivery of the hybrid propulsion system to Fjord1`s new ferry, the Fjellstrand designed ZeroCat 120. The ferry is a catamaran built with aluminum at Fjellstrand AS. It shall operate all-electric between Halhjem - Våge and includes Odin`s Eye DC grid solution adapted for this distance. 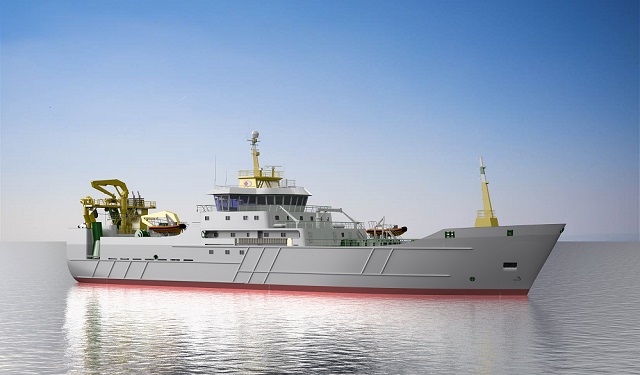 NES has also signed a contract with Havyard Ship Technology for the supply of a complete Odin`s Eye - ultra rapid DC grid system for a new pelagic trawler. This new innovative vessel, owned by France Pèlagique and designed by Dutch ASD, is 80 meters long and will replace one of their two French-flagged trawlers (built in the early 80`s).

The challenge with these kinds of vessels is the noise level emanating from the engines, and the trawler has a silent class notation. The low rotation speed of the electrical motor will keep the noise level at a minimum when operating the vessel.

By installing NES` DC grid system, Odin`s Eye, the vessel will be equipped with the latest technology. Energy efficiency, together with space and weight reductions, C02 and NOx reductions, and the use of variable speed gen-sets, will allow the vessel to meet the ever-increasing environmental regulations.

The main propulsion motors, 2 x 2250kW, are of a Permanent Magnet (PM) type and are direct driven without gearing from 0-135 RPM. The weight reduction of the PM main propulsion motors together with the drives is, compared to an asynchronous motor, saving more than 20 tons on each PM machine. The total generator output is 6,00kW and the bow thruster is 800kW.