In a ceremony in San Diego on Wednesday, the crew of the Coast Guard Cutter Stratton offloaded an impressive 50,500 pounds of cocaine onto the pier. The drugs were captured in 25 interdictions in the eastern Pacific by the cutters Stratton, James, Dependable and Steadfast and the destroyer USS Chafee.

The ceremony capped off a record-setting fiscal year for drug seizures at sea. All in all, the USCG has captured cocaine shipments totaling to 455,000 pounds since last October, edging out last year's record amount by roughly six tons. This year’s final number could be higher, as there is still one week left before FY2018 begins.

"These drugs represent the scale of the threat transnational organized crime poses to our nation and to all peaceful nations of the Western Hemisphere," said Adm. Paul Zukunft, commandant of the Coast Guard. "The Coast Guard and Justice Department, along with interagency partners, are determined to commit our efforts to detect, interdict, investigate and prosecute the entirety of these criminal networks and end the drug fueled instability and violence in the region."

Adm. Zukunft told the Washington Post that the interdictions are becoming routine. "We have seen a dramatic increase in cultivation and production," he said. "This is almost exclusively coming out of Colombia."

In 2015, Colombia stopped aerial application of the herbicide glyphosate over coca plantations, and the country's farmers are producing record volumes of the potent crop. In addition, U.S. officials contend that the peace accord between the Colombian government and the rebel group Revolutionary Armed Forces of Colombia (FARC) has slowed the pace of anti-narcotics efforts. There may be another factor: Colombian narcotics expert Daniel M. Rico suggests that the resurgence of coca acreage is due to in part to simple economics. The decline in the price of gold (relative to 2012 levels) has reduced the profitability of illegal gold mining, pushing the rural poor back into coca farming, according to Rico. Whatever the largest single cause may be, cultivated coca acreage doubled between 2012 and 2016. 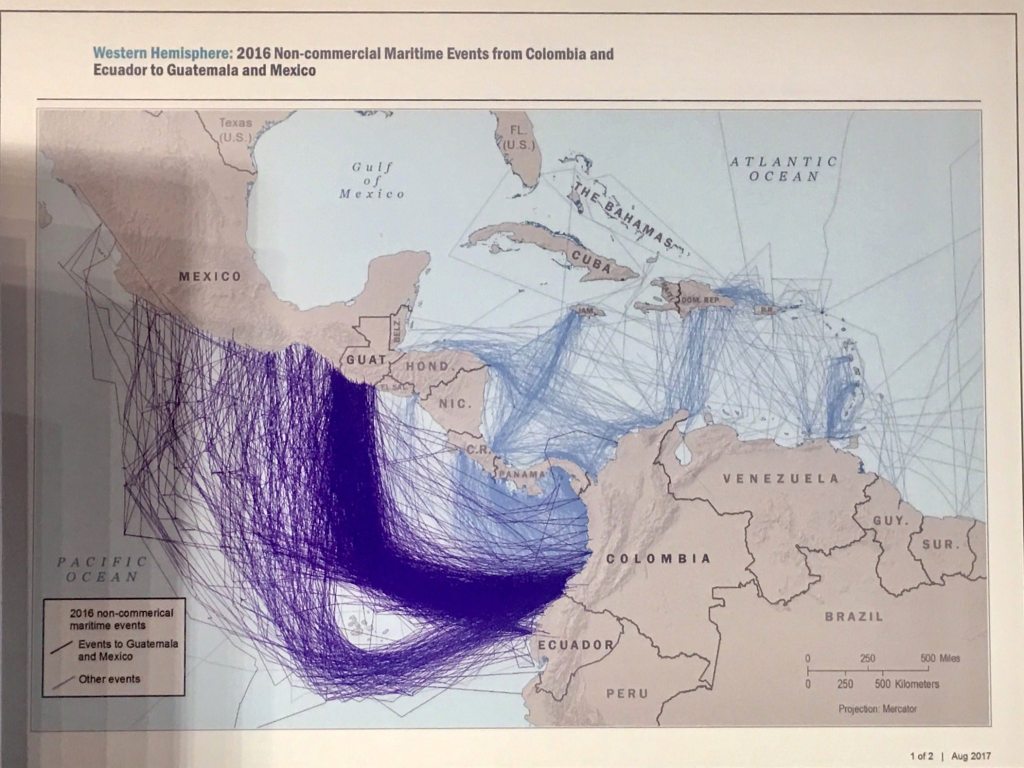 This booming industry ships its refined product by boat to Guatemala or Mexico, then overland to the United States. The smugglers' eastern Pacific sea route is indispensable because Colombia has no road or rail connection to its northern neighbors. The boat shipments are vulnerable to detection and interdiction, as the Coast Guard's seizures show, but Zukunft notes that the service does not have nearly the assets required to stop all the boats that are identified by intelligence.

As the number of blockade-runners goes up, the numbers for availability, useage rates and overdoses have risen in the United States. President Donald Trump threatened Colombia earlier this week with the prospect of losing its certification as an American partner in the "War on Drugs" due to the rising volumes. Colombia is widely considered to be the United States’ closest ally in South America.