U.S. will be Key Beneficiary of Belt and Road Initiative

A new study by global economic consultants Centre for Economics and Business Research (Cebr) in the U.K. estimates that the global economic impact of the Belt and Road Initiative (BRI) is likely to boost world GDP by $7.1 trillion per annum by 2040.

Other than China, which by 2040 will be by far the world’s largest economy and which will therefore benefit from any boost to the world economy, the biggest single potential beneficiary of the BRI is likely to be the U.S. even though it isn’t participating directly in the project. The large size of the U.S. economy means that it gains from the indirect effects of world GDP being boosted. Even though the boost to U.S. GDP is only 1.4 percent (much smaller than most other major economies) the absolute size of the U.S. economy is such that this is more than the absolute boost to any other economy except China.

The next largest impact is in Russia, followed by Japan, Indonesia, Korea, U.K., India and the Netherlands. 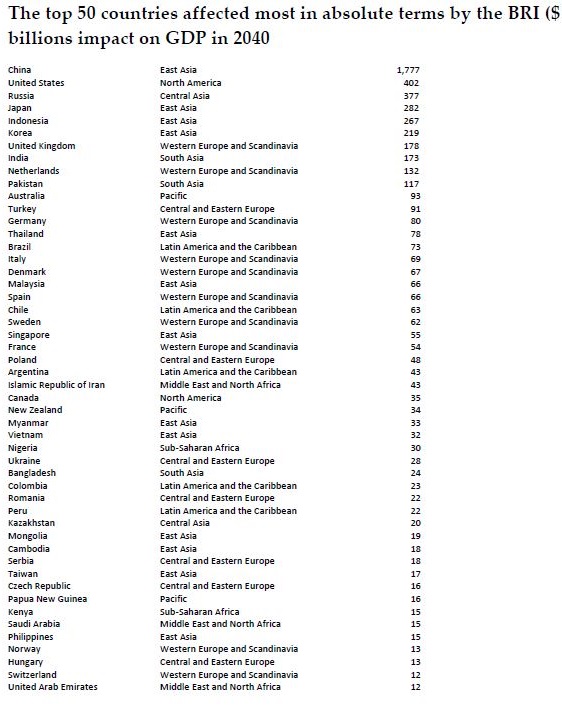 The region of the world that will most be transformed by the BRI is likely to be Central Asia and Russia where the report predicts that GDP in 2040 will be 18 percent higher. GDP is also likely to be boosted in Central Europe (six percent) Western Europe (five percent) and East Asia (five percent).

One of the elements of the report, From Silk Road to Silicon Road, is a comparison between the BRI and the network of the roads, dams and aqueducts built by the Romans. The first Roman road was the Via Appia built in 312 BCE. Eventually a network of 382 major roads was completed connecting Britain to Africa and the Middle East and connected with the Persian Royal Road. The network is estimated to make up 400,000 kilometers (250,000 miles) of roads although only 80,000 kilometers (50,000 miles) were paved. Today, a kilometer of non-motorway road costs at least $5 – $10 million,so the 80,000 kilometers of paved roads might have cost up to $800 billion.

The Chinese Belt and Road project extends beyond road infrastructure, but the road that are parts of the project have been estimated to consist of 60,000 kilometers (37,000 miles) of new or upgraded roads by the Mercator Institute for China Studies in Berlin. So, fewer kilometers than the Roman road system, but most of it will be in place by 2040, implying a speed of building more than 10 times faster than the Romans.

The report makes the point that it is important to recognize that the BRI is not just the physical and electronic infrastructure but the extent to which it makes trade around the world easier. The Roman roads were initially built for military purposes but eventually enhanced trade. This is why the Cebr analysis of the BRI project has had to combine assessments both of the direct impact of the projects and also the extent to which they reduce trade frictions.