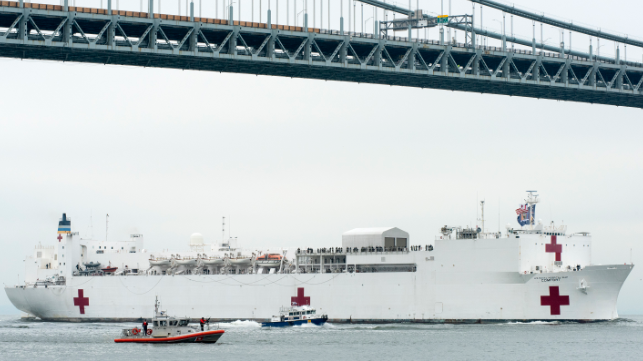 Growth in the volume of world merchandise trade is expected to rebound this year from its tepid performance in 2016, but only if the global economy recovers as expected and governments pursue the right policy mix.

The World Trade Organization (WTO) is forecasting that global trade will expand by 2.4 percent in 2017. However, as deep uncertainty about near-term economic and policy developments raise the forecast risk, this figure is placed within a range of 1.8 percent to 3.6 percent. In 2018, the WTO is forecasting trade growth between 2.1 percent and four percent.

The unpredictable direction of the global economy in the near term and the lack of clarity about government action on monetary, fiscal and trade policies raises the risk that trade activity will be stifled. A spike in inflation leading to higher interest rates, tighter fiscal policies and the imposition of measures to curtail trade could all undermine higher trade growth over the next two years.

"Weak international trade growth in the last few years largely reflects continuing weakness in the global economy. Trade has the potential to strengthen global growth if the movement of goods and supply of services across borders remains largely unfettered. However, if policymakers attempt to address job losses at home with severe restrictions on imports, trade cannot help boost growth and may even constitute a drag on the recovery," said WTO Director-General Roberto Azevêdo.

"Although trade does cause some economic dislocation in certain communities, its adverse effects should not be overstated – nor should they obscure its benefits in terms of growth, development and job creation. We should see trade as part of the solution to economic difficulties, not part of the problem.

“In fact, innovation, automation and new technologies are responsible for roughly 80 percent of the manufacturing jobs that have been lost and no one questions that technological advances benefit most people most of the time. The answer is therefore to pursue policies that reap the benefits from trade, while also applying horizontal solutions to unemployment which embraces better education and training and social programs that can quickly help get workers back on their feet and ready to compete for the jobs of the future," he said.

The WTO's more promising forecasts for 2017 and 2018 are predicated on certain assumptions and there is considerable downside risk that expansion will fall short of these estimates. Attaining these rates of growth depends to a large degree on global GDP expansion in line with forecasts of 2.7 percent this year and 2.8 percent next year. While there are reasonable expectations that such growth could be achieved, expansion along these lines would represent a significant improvement on the 2.3 percent GDP growth in 2016.

In 2016, the weak trade growth of just 1.3 percent was partly due to cyclical factors as economic activity slowed across the board, but it also reflected deeper structural changes in the relationship between trade and economic output. The most trade-intensive components of global demand were particularly weak last year as investment spending slumped in the U.S. and as China continued to rebalance its economy away from investment and toward consumption, dampening import demand.

Global economic growth has been unbalanced since the financial crisis, but for the first time in several years all regions of the world economy should experience a synchronized upturn in 2017. This could reinforce growth and provide an additional boost to trade, says the WTO.

Forward looking indicators, including the WTO’s World Trade Outlook Indicator, point to stronger trade growth in the first half of 2017, but policy shocks could easily undermine positive recent trends. Unexpected inflation could force central banks to tighten monetary policy faster than they would like, undercutting economic growth and trade in the short-run.

Other factors, such as the uncertainty provoked by the United Kingdom's withdrawal from the European Union could potentially have an effect. Meanwhile, the possibility of a rise in the application of restrictive trade policies could affect demand and investment flows and cut economic growth over the medium-to-long term. These factors indicate there is a significant risk that trade expansion in 2017 will fall into the lower end of the range.

Historically, the volume of world merchandise trade has tended to grow about 1.5 times faster than world output, although in the 1990s it grew more than twice as fast. However, since the financial crisis, the ratio of trade growth to GDP growth has fallen to around 1:1. Last year marked the first time since 2001 that this ratio has dropped below 1, to a ratio of 0.6:1.  The ratio is expected to partly recover in 2017. 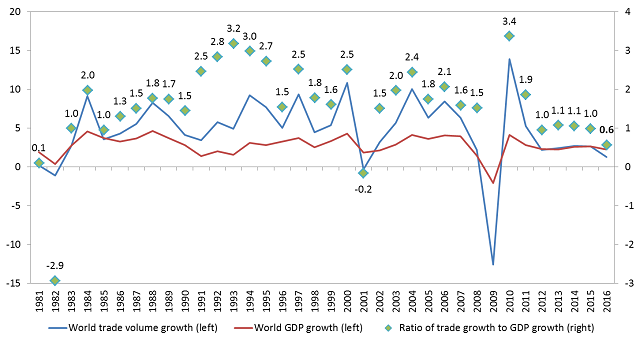 Details on trade developments in 2016

The unusually low 1.3 percent growth in world merchandise trade volume in 2016 was the result of several risk factors converging over the course of the year. Developing economies suffered a sharp three percent decline in imports in the first quarter, equivalent to an annualized drop of 11.6 percent, but growth resumed in the second quarter and losses were recovered by the end of the year.

Meanwhile developed economies' imports continued to grow but at a reduced pace. The weakness of imports was reflected on the export side in slow growth of shipments from both developed and developing countries.

Leading indicators of real trade growth are up in the early months of 2017, suggesting a strengthening of trade at the start of this year. Container throughput of major ports has recovered from its slump of 2015-16 to reach a record high level, with year-on-year growth of 5.2 percent in the first two months of 2017. 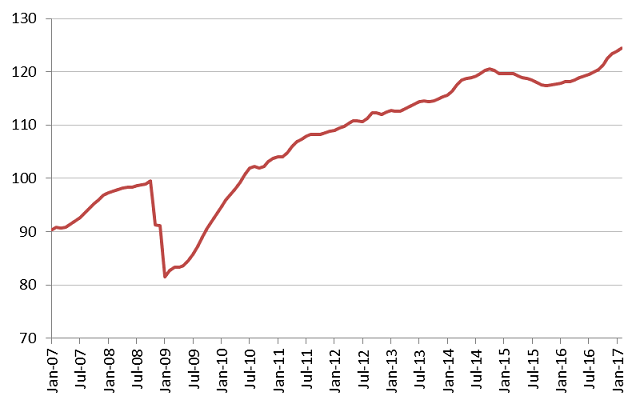 Balanced against the positive indications are clear and significant risks. Growing anti-globalization sentiment and the rise of populist political movements have increased the likelihood that restrictive trade measures will be employed more widely. Narrowly targeted measures would probably not have an appreciable impact on world trade and output, but across-the-board measures or abandonment of existing trade agreements could damage consumer and business confidence and undermine international trade and investment.

With inflationary pressures building gradually in developed countries, central banks could also accelerate their pace of monetary tightening, with negative consequences for economic growth and trade in the short-run. Changes in fiscal policy could also have unintended international consequences that could reduce global economic activity and trade.

In Europe, challenging negotiations between the United Kingdom and the rest of the European Union will increase uncertainty about the shape of their trade relations in the future. Sovereign debt in highly indebted E.U. countries is still an outstanding issue that may come to the fore once again over the next two years.

The hospital ship USNS Comfort arrived at a pier in Manhattan last week in order to provide support for the region's hospitals as they struggle to accommodate thousands of COVID-19 patients. However, Comfort has implemented strict restrictions on how patients may be admitted, much as she did in 2017 during her relief mission to Puerto Rico. Once again, shoreside hospital administrators say that these restrictions have effectively kept Comfort out of the fight: on Thursday morning, four days after her arrival,...