Total has signed an agreement with Russia's Novatek to acquire  a direct working interest of 10 percent in Arctic LNG 2, a giant LNG project lead by Novatek on the Gydan Peninsula in the north of Siberia.

The agreement was signed in the presence of the Russian President Vladimir Putin and French President Emmanuel Macron. Taking account of Total’s approximate 19 percent stake in Novatek and Novatek’s intention to retain 60 percent of the project, Total's overall economic interest in this new LNG project will be approximately 21.5 percent. Should Novatek decide to reduce its participation below 60 percent, Total will have the possibility to increase its direct share up to 15 percent. 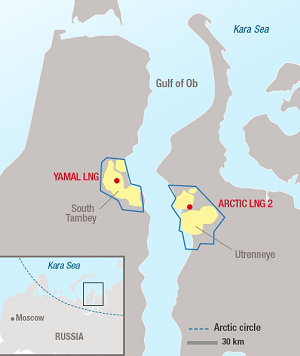 Novatek and Total have also agreed that Total will have the opportunity to acquire a 10 to 15 percent direct interest in Novatek's future LNG projects in Yamal and Gydan.

“This project fits into our strategic partnership with Novatek and also with our sustained commitment to contribute to developing the vast gas resources in Russia’s far north which will primarily be destined for the strongly growing Asian market,” said Patrick Pouyanné, Chairman and CEO of Total. “Arctic LNG 2 will contribute to our strategy of growth in LNG by developing competitive projects based on giant low costs resources.”

With a production capacity of approximately 19.8 million tons per year (Mt/year), or 535,000 barrels of oil equivalent per day (boe/d), Arctic LNG 2 will unlock more than seven billion boe of hydrocarbons’ resources in the onshore Utrenneye gas and condensate field. The project will involve the installation of three gravity-based structures in the Gulf of Ob on which will be installed the three liquefaction trains of 6.6 Mt/year capacity each.

Like Yamal LNG, Arctic LNG 2 production will be delivered to international markets by a fleet of ice-class LNG carriers that will be able to use the Northern Sea Route for cargoes destined for Asia.

The final investment decision is expected in 2019, with plans to start up the first train by end 2023.

Total has been present in Russia for almost 25 years. In 2017, the Group's production averaged 318,000 boe/d. This production comes from the Kharyaga (20 percent) and Termokarstovoye (49 percent) fields, as well as others through Total's stake in Novatek (19 percent). Total is also partner in the Yamal LNG project (20 percent), which began exporting LNG in late 2017. Yamal LNG shipped the second million tons of LNG produced at its first LNG train earlier this month. In April, the first firing of compressor gas turbines was performed at the second LNG train comprising 5.5 million tons per annum.