With SMM this week, VesselsValue has put together an infographic looking at the best performing German owners since 2017 SMM. Oldendorff Carriers tops the list by growing their fleet by 22 vessels and increasing their total value by $716 million. Today, their total fleet comprises 109 vessels worth $2.6 billion.

In June, the company announced that between the end of 2018 and mid-2020, it will take delivery of 21 “eco” bulk carrier newbuildings from yards in Japan and China, which were mostly ordered between 2015 and 2017 at historically attractive prices. Oshima Shipbuilding will deliver two 100,000dwt Post-panamaxes and three 62,000dwt Ultramaxes during the first half of 2020.

NACKS (Cosco / Kawasaki JV yard in Nantong) and DACKS (the sister yard in Dalian) will build six 61,000dwt Ultramax bulk carriers which will all deliver next year. 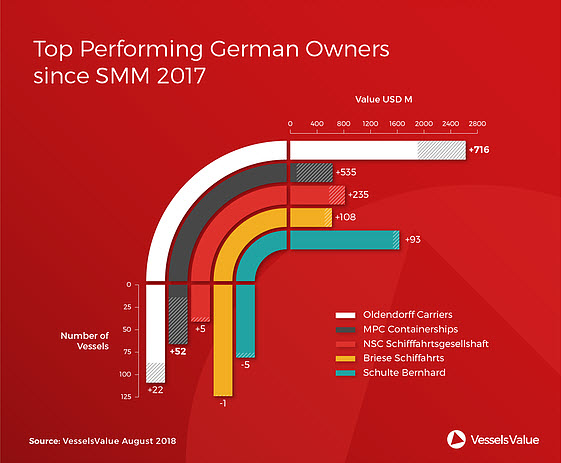