New York reinsurance broker Guy Carpenter & Company has estimated that it could cost $3.3 billion to cover the extent of losses associated with the Tianjin explosions.

The company has released a report that estimates damages to be worth between $1.6 billion and $3.3 billion, more than double early estimates released by Credit Suisse of $1 billion to $1.5 billion.

The report provides initial loss estimates and outlines the many variables involved in assessing losses emanating from the two massive initial explosions that occurred at Tianjin Port on August 12.

“The explosions that occurred in Tianjin, China, are likely to constitute one of the largest insured man-made losses to date in Asia and will certainly be considered one of the most complex insurance and reinsurance losses in recent history,” commented James Nash, CEO of Asia Pacific Operations for Guy Carpenter.

The fireball and shock wave from the explosions blasted shipping containers; incinerated vehicles in the port and on an adjacent highway overpass; destroyed warehouses, production facilities and dormitories; impacted the nearby Donghai Road Railway Station and blew out windows within residential structures for several kilometers.

While access to the site is limited, Guy Carpenter’s satellite-based catastrophe evaluation service, was able to use high resolution pre- and post-event satellite imagery to understand what exposures were present at the time of the blast and therefore could contribute to the loss.

The study outlines the complexity of the event from an insurance and reinsurance perspective and provides a preliminary estimate of insured losses from many classes including: containers; cargo in containers; property; automobiles and general aviation. 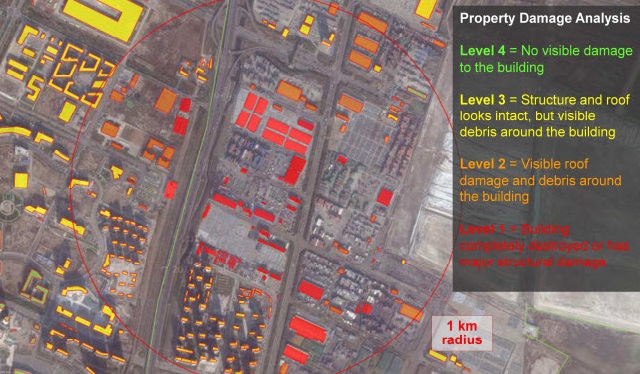