SSI: Biofuels May be Best Zero-Carbon Option for Shipping

The Sustainable Shipping Initiative, an NGO founded by environmental groups and shipping firms to advocate for eco-friendly marine transportation, has released a comprehensive report on the feasiblity of zero-emissions deep sea vessels. Based on cost factors, its findings suggest that biofuels may be the most practical way to reduce shipping's GHG footprint.

The study - prepared by Lloyd's Register and UMAS - finds that in order to meet the IMO target of a 50 percent cut in CO2 emissions by 2050, zero-emissions vessels will have to enter the fleet in significant numbers beginning in 2030. Since ships last for 20-30 years, most vessels launched in 2030 will still be in service in 2050 - including most vessels with high emissions profiles.

The report assesses the profitabity of carbon-free options for trans-oceanic fleets with regard to technological maturity, price and upstream emissions. The three broad technologies considered include hydrogen fuel cells with electric motors, batteries with electric motors and biofuels with conventional diesel engines. (Wind and nuclear were disqualified.) 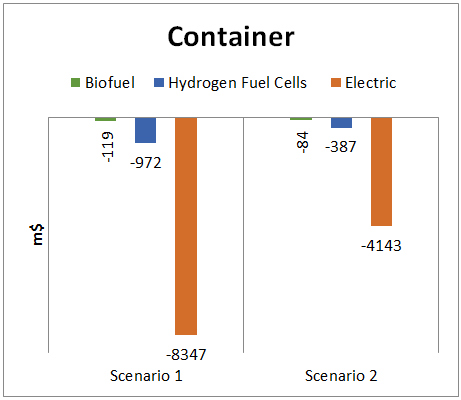 Under two different future scenarios, all-electric is by far the least profitable option in long-distance, trans-oceanic operation. Due in part to high capital costs, an electric containership would be billions of dollars less profitable than a conventional diesel-powered vessel over the course of its life (left). "Batteries remain uncompetitive under the assumptions used," SSI concluded. "Much development is needed, in terms of performance, energy density, and cost, for them to be worthy of consideration for use in the context of the ships being analysed, even with the addition of a carbon price to attempt to level the playing field."

Hydrogen fuel cells fall within the realm of the possible, SSI said, though capital costs and fuel supply questions would have to be addressed. Depending upon the source of the fuel - steam reformation of fossil fuels or electrolysis using renewable electricity - hydrogen's price and carbon emissions profile vary greatly. A recent DNV GL study found that due to the emissions released during its manufacture, hydrogen from natural gas is a more carbon-intensive fuel than HFO.

According to SSI, biofuels may show the most promise for trans-oceanic operating profiles: if they could be sourced in industrial quantities, their additional cost could be much smaller than other options, and therefore more acceptable to industry. Biofuels would be compatible with existing diesel technology, meaning no extra capex costs for the shipowner. However, obtaining enough quantities from sustainable, non-food sources could pose a challenge.

SSI concluded that further analysis and industry investment will be needed in order to reach the IMO's target for 2050. This is an invitation, the group said,  for "the most ambitious members of the industry to challenge the status quo."