The Port of Antwerp has initiated a project to produce sustainable methanol as part of its ambition to be a carbon-neutral port.

Methanol is used on a daily basis by the chemical industry players in the port, and the port of Antwerp uses around 300,000 tons of methanol annually for chemical processes and fuel production: everything from insulation panels to fuel additives.

However, methanol is currently obtained from fossil sources. "We will produce methanol from waste CO2 and sustainably generated hydrogen," says Didier Van Osselaer, project manager at Port of Antwerp. "The waste CO2 will be collected by a new process called Carbon Capture and Utilization (CCU) in which at least some of the CO2 emissions are recovered. This CO2 is then combined with hydrogen generated on a sustainable basis using green energy in a new electrolysis plant. These two processes – CCU and electrolysis – together form the perfect basis for producing sustainable methanol."

This will mean that the Port of Antwerp will avoid producing at least one ton of CO2 emissions per ton of methanol generated.

Methanol can also be used in the future as a sustainable fuel to power vessels such as tug boats, and the port plans to introduce a methanol-powered tug in the near future.

ENGIE, Oiltanking, Indaver, Vlaamse Milieuholding (VMH) and Helm-Proman have declared their support for the project, along with several academic institutes. ENGIE will contribute its knowledge of the electricity market, Oiltanking will give advice on the logistical aspects of methanol production and storage and Indaver will offer expertise on collection of CO2. Helm-Proman is involved with a view to finding markets for the methanol that is produced, VMH will be responsible for at least part of the financing, while Port of Antwerp will act as a bridge between the public and private sectors. 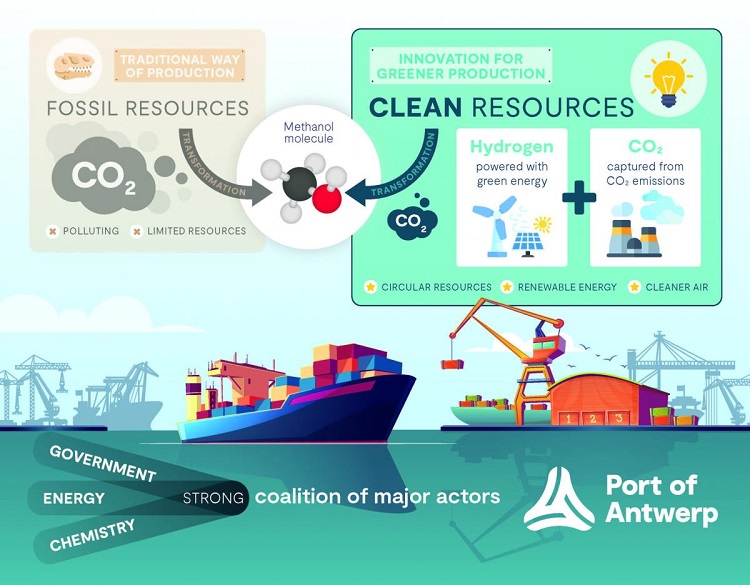