Published by The Lowy Interpreter

Central to the plan is the construction of one or more islands, so called Power Link Islands with interconnections to surrounding countries. The islands will be located in the middle of the North Sea, and TenneT expects many wind farms to be connected (possibly becoming the focal point for 70,000 MW to 100,000 MW of power). 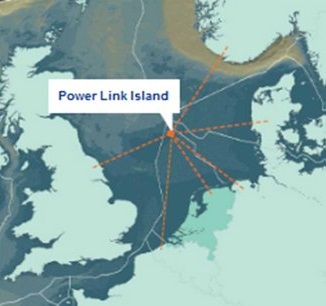 The generated wind energy could then be distributed from the islands over direct current lines to the North Sea countries of the Netherlands, Denmark, Germany, Great Britain, Norway and Belgium.

Transmission cables would simultaneously function as interconnectors between the energy markets of the countries, so that besides transmitting wind electricity to the connected countries, the countries could also trade electricity.

Staff, components and assembly workshops could be stationed on the island, to simplify offshore logistics.

The Dogger Bank area is the location for the first Power Link Island  as it has optimal wind conditions, is centrally located and is in relatively shallow water.

Discussions with other potential partners are ongoing. TenneT unveiled its vision of the North Sea Wind Power Hub in June 2016 as support for the 2050 climate goals formulated in the Paris Agreement.

Maersk Supply Service, which operates offshore supply vessels for the worldwide energy sector, announced that it will deploy a second vessel this summer as part of its participation with The Ocean Cleanup, a foundation developing advanced technologies to rid the world’s oceans of plastic. Since 2018, Maersk Supply Service has project managed and delivered offshore work for The Ocean Cleanup, including the tow and testing of the ocean systems. In January 2021, the company announced that it was extending its...

After being broadly criticized by the cruise industry for the level of restrictions that it plans to impose on cruise ships as they resumed sailing for U.S. ports, the Centers for Disease Control and Prevention (CDC) updated its guidance on a few points. This came as a federal judge was hearing the pending lawsuit and application for an injunction, which if granted, could revoke the CDC’s orders and permit the cruise lines to resume sailing from U.S. ports. “These instructions reflect...

The U.S. Coast Guard has shut down traffic on the Lower Mississippi River at mile marker 736 because of a major crack in a span of the Hernando de Soto Bridge, which carries Interstate 40 over the river at Memphis. Photos of the crack appear to show the two-foot-wide steel box beam broken nearly in two at a location near the bridge's center pier, on one end of the span on the Tennessee side of the bridge. Three of the...

In a virtual meeting with a group of African students in late April, US Secretary of State Antony Blinken asked a question, implicitly, about China: “Are they bringing their own workers with them, or are they giving jobs to people in the country where they’re making investments?” Blinken seemed to be suggesting that Chinese projects and investments in the continent do not provide benefits to locals. This view has been prominent in the media and commentary. Certainly, it is possible to find individual examples of Chinese projects...