The five mtpa Mundra LNG terminal has been developed by the Adani Group and Gujarat State Petroleum Corp. 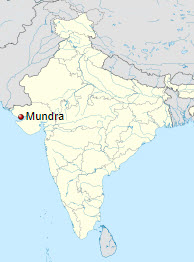 Modi said that when Gujarat got its first LNG terminal, people were surprised. Now, the State is poised for its fourth LNG terminal and emerging as an LNG hub in India.

Modi spoke of efforts to ensure that all villages are electrified and the goal that every household in India would have electricity. We want to bring qualitative changes in the lives of the common citizen of India, he said.

According to the Energy Information Administration (EIA), natural gas mainly serves as a substitute for coal for electricity generation and as an alternative for LPG and other petroleum products in the fertilizer and other sectors. India was self-sufficient in natural gas until 2004, when it began to import LNG from Qatar. Because it has not been able to create sufficient natural gas infrastructure on a national level or to produce adequate domestic natural gas to meet domestic demand, India increasingly relies on imported LNG. India was the world's fourth-largest LNG importer in 2015, following Japan, South Korea and China, and the country consumed nearly seven percent of the global trade.

According to the EIA, India’s economic development is likely to have a considerable impact on future international energy markets—including U.S. energy exports—because of the country’s large population and potential for growth. Despite this, energy consumption per person in India in 2040 is predicted to remain relatively low. This is partly attributable to infrastructure constraints, a lack of investment in the energy sector and use of traditional, non-marketed fuels such as charcoal.

In 2015, Russia, China, South Korea and the U.S. all had levels of energy consumption per person that were at least four times larger than projected for India in 2040. This is despite the fact that India is projected to be the world’s fastest-growing economy over the 2015 to 2040 period.