The UK Marine Accident Investigation Branch has released its final report on the grounding of the Dutch freighter Ruyter off Rathlin Island, Northern Ireland. The investigators determined that the vessel went aground because the master had left the bridge prior to the collision, leaving no one present to adjust the heading.

On October 10, the Ruyter was bound from Denmark to Warrenpoint, Northern Ireland with a load of lumber. The master came up to the bridge at 1830 hours for the chief mate's meal relief. The chief officer told investigators that he smelled alcohol on the master's breath at that time, but he believed the captain was fit to stand a watch. The master went below after the meal relief and consumed more alcohol in his cabin.

At 2000, the master returned to the bridge and took over for the 2000-2400 watch. The chief officer again smelled alcohol on his breath, but he turned over the watch and went below, leaving the master alone on the bridge. The master adjusted the autopilot headings several times, then set it at 145 degrees at 2105 hours (chart below) . At some point after, the master left the bridge and did not return. The autopilot was set to the same heading at 2311, when the Ruyter went aground on Rathlin Island's north shore. 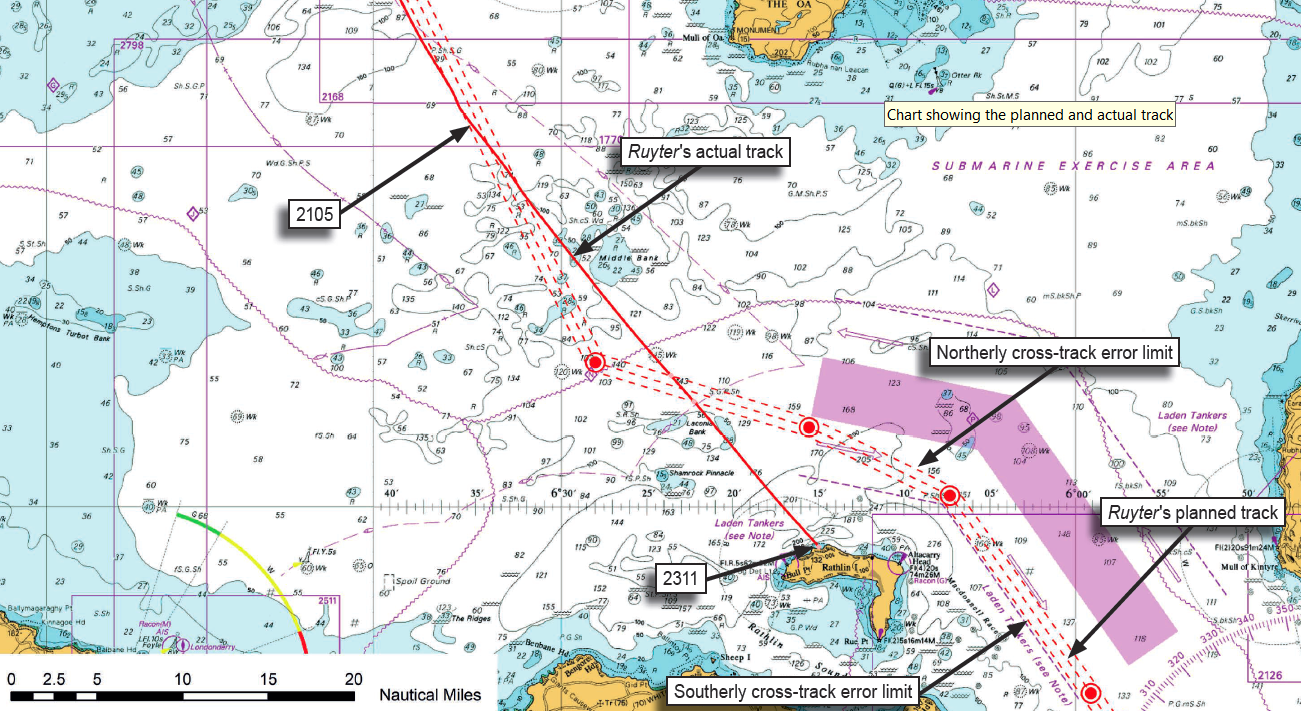 The bridge navigational watch alarm (BNWAS), which would have alerted the chief mate to the master's absence from the bridge, was not turned on. The chief mate awoke to the sound of the grounding and went to the bridge, and he took command of the vessel under instructions from the company at 2323 hours.

At 0022 hours, the chief mate managed to free the Ruyter from the rocks using astern thrust, assisted by a rising tide. An all-weather lifeboat out of Portrush arrived at 0049 hours, and the Ruyter proceeded to a nearby anchorage for an inspection. Her shaft generator caught fire during this transit due to a misalignment of the shaft that occurred during the grounding, but the crew quickly put out the blaze. She berthed at Warrenpoint at 1600 hours October 11.

After discharging her cargo at Warrenpoint, Ruyter proceeded to a dry dock in Belfast, where a full inspection revealed extensive structural damage throughout the forward third of the hull, with 26 penetrations in three compartments. There was also damage to the shaft generator due to the fire.

UK MAIB investigators determined that the master likely had a pattern of excessive drinking several weeks prior to the accident, which had been observed by the chief mate. However, the mate did not feel certain enough of the master’s impairment or empowered enough to raise the matter with the company. MAIB determined that it was not the first time that the master had left the bridge unattended, nor was it the first time that he had stood a night watch alone, a violation of the watchstanding schedule for the Ruyter.

In October, at a court in Armagh, Capt. Aleksandr Iakovtsov pled guilty to charges of failing to safely navigate his ship and causing serious damage to his vessel. Magistrate Paul Copeland sentenced Capt. Iakovtsov to a fine of $1,300. “It should have been apparent to you as an experienced mariner that you were on a collision course as you left Islay towards Northern Ireland," Copeland said. "You are fortunate the ship struck a shallow patch under the cliffs and that you were able to come off in a short time."