At about 0900 hours Wednesday, the crew of the fishing vessel Midori reported a fire on board. A crewmember on the Midori made a cell phone call to another nearby fishing vessel, the Charlie D, which contacted the Coast Guard on VHF radio. Coast Guard Sector Humboldt Bay put out an urgent marine broadcast to shipping and dispatched a helicopter crew and a motor lifeboat to assist. 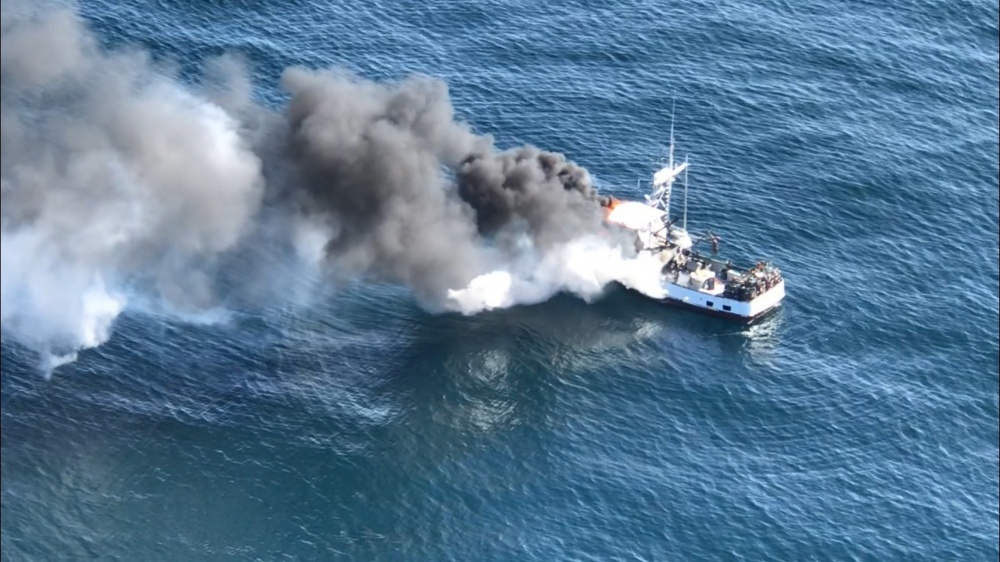 Before responders arrived on scene, the crew of the Midori put on their immersion suits and abandoned ship into a liferaft. The good samaritan vessel Pacific Bully took them on board shortly thereafter. By the time the Coast Guard assets arrived, the Midori's pilothouse was fully ablaze. The tug Michelle Sloan was passing nearby and diverted to help with the response, and her crew extinguished the fire.

“The quick response of the vessels Pacific Bully, Charlie D and Michelle Sloan, along with the Midori’s readiness with appropriate survival equipment saved the lives of five fishermen yesterday,” said Cmdr. Brendan Hilleary, the chief of response at Sector Humboldt Bay. “Our crews continued the good work this morning by mitigating the threat of pollution the vessel could have caused.”

The Midori had about 1,500 gallons of diesel on board, and an overflight revealed no signs of pollution. The crew of the Midori reported no serious injuries.