Plans are moving forward to create a regional hub for the offshore wind industry in New York harbor. Energy companies Equinor and BP have agreed to invest $00 to $250 million for infrastructure upgrades at the South Brooklyn Marine Terminal (SBMT) complex in Brooklyn, New York to make the site one of the largest dedicated offshore wind port facilities in the United States.

The 73-acre site will have the capacity to accommodate wind turbine generator staging and assembly activities at the scale required by component manufacturers participating in the development of offshore wind locations in the region. Under the agreement co-signed by terminal operator Sustainable South Brooklyn Marine Terminal and New York City Economic Development Corporation, Equinor and BP will create an operations and maintenance hub and staging area at the site.

“We are enormously proud to lay the groundwork today for our vision of making New York City a nation-leading hub for the offshore wind industry,” said NYCEDC Chief Strategy Officer and Executive Vice President Lindsay Greene. “This agreement builds on the City’s $57M commitment to reactivate SBMT as a key manufacturing and operations base and will help make New York a leader in climate resiliency as well as air quality through clean energy investments.” 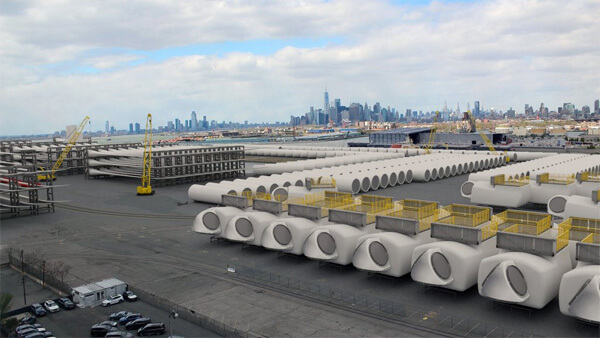 Rendering of the 73 acre site (Equinor/BP)

According to the companies, the South Brooklyn Marine Terminal is the only industrial waterfront site in the New York City area with the capacity to accommodate wind turbine generator staging and assembly activities at the scale required by component manufacturers.

The port will become the staging facility for two multi-phase wind projects being developed in a partnership between Equinor and BP as well as a destination for future offshore wind projects in the region. The companies are in process for both the Empire Wind and Beacon Wind projects that will supply 3.3 gigawatts of energy. Empire Wind will be located 15 to 30 miles southeast of Long Island and spans 80,000 acres, with water depths of between approximately 75 and 135 feet. The first phase is currently scheduled to start commercial production by late 2026. Beacon Wind is located more than 60 miles east of Montauk Point and 20 miles south of Nantucket and covers 128,000 acres. The lease was acquired in 2019 and has the potential to be developed with a total capacity of more than 2 GW. Equinor’s ambition is to install 12-16 GW of renewable energy capacity by 2030.

Last week, the U.S. Department of the Interior and the Bureau of Ocean Energy Management completed a record offshore wind auction for the New York Bight. Six leases for 488,000 acres raised a record $4.37 billion. These projects are likely to be developed by the end of the decade as a large commitment from New York and New Jersey to develop their offshore wind energy resources.