As demand increases for new forms of zero-emission transportation to support cities in their efforts to reduce emissions, a Swedish start-up company has an innovative design for a foil-assisted catamaran powered by batteries that they say can revolutionize waterborne transit. Green City Ferries said its catamaran built of carbon fiber provides energy efficiency, sustainability, and speed.

Called the BELUGA 24, the design is based on proven air-foil technology. A foil placed midship lifts the ship halfway out of the water at high speed and thereby reducing the water-resistance significantly. This means less energy consumption and less wake wash.

“With BELUGA 24 we are demonstrating a high-speed emission-free alternative to diesel ferries that also costs less to operate,” said Fredrik Thornell, newly appointed CEO of Green City Ferries. "We expect a consumption of 30 kWh per nautical mile at 30 knots, which is almost half of what a conventional catamaran consumes."

The power supply for the ferry will come from either Japanese LTO batteries and/or Canadian fuel cells, says Green City.  The criteria for the selection of the power supply focuses on high performance, short charging times, and long life. The company supplied these guidelines in the supplier selection. 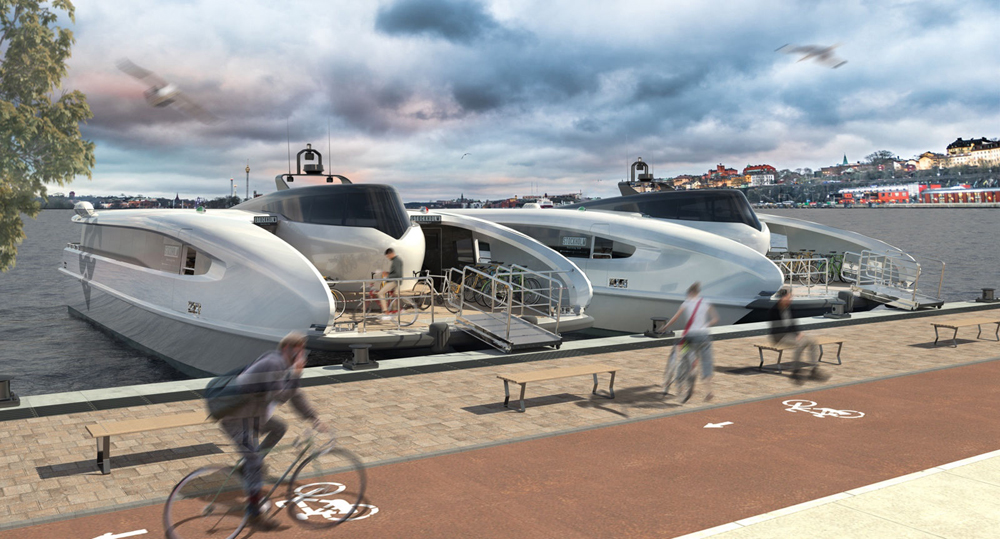 To make the ferries comfortable and well-suited for commuters and inner-city transportation, each vessel will accommodate up to 150 passengers. They will also have space for 30 bicycles, which is important in Sweden where the vessels will be first deployed.

Designs for the new ferries were developed in partnership with Teknicraft (New Zealand) and Sculli Design studios (Italy). The designers sought to ensure passengers' comfort to make the ferries an attractive alternative to traditional modes of transportation, including the use of personal automobiles.

Green City Ferries has global exclusivity to build and sell this type of ship built of carbon fiber. The first BELUGA24 is expected to enter service in 2023.