The guided missile destroyer HMAS Hobart (III) was commissioned in to the Royal Australian Navy fleet in Sydney on Saturday.

The Prime Minister of Australia, the Honorable Malcolm Turnbull attended the ceremony saying that Australia plays a leading role in ensuring the world remains at peace. "In these uncertain times, a strong, well equipped Australian Defence Force is absolutely critical," he said.

"The commissioning of HMAS Hobart provides clear evidence of our determination to keep Australians safe and ensure we are ready and able to meet the challenges that come our way in the years ahead.”

The third Australian Navy ship to carry the name Hobart will provide air defense for accompanying ships in addition to land forces and infrastructure in coastal areas. Hobart’s Aegis combat system, including the phased array radar and missile systems, will provide an advanced air defense system capable of engaging enemy aircraft and missiles at ranges in excess of 150 kilometers (93 miles).

She will also be capable of undersea warfare and be equipped with modern sonar systems, decoys, surface-launched torpedoes and an array of effective close-in defensive weapons.

HMAS Hobart is the first of three ships of the Hobart Class guided missile destroyers. Her sister ships will be Brisbane (III) and Sydney (V). The keel of Hobart was laid down in September 2012 and the ship was launched in May 2015. HMAS Hobart is based on the Navantia designed F100 frigate and was constructed in Australia by the Air Warfare Destroyer Alliance.

Commanding Officer Captain John Stavridis said the ship will be the most complex and capable warship ever operated by Australia. “Her sensors and weapons are leading edge and she is capable of conducting the full span of maritime security operations.

“However, without the 185 men and women who serve in her, she is just another ship alongside. To be a warship requires a specialist team who are masters in their individual skills and are capable of working collectively to achieve the mission. I am blessed with such a crew, who are both proficient and professional.”

The ceremony included the breaking of the commissioning pennant and hoisting of the Australian White Ensign for the first time, at which point, Hobart became the responsibility of Captain Stavridis.

Witnessing the historic occasion were sailors from the former Hobarts which served with distinction in the Second World and Vietnam Wars. 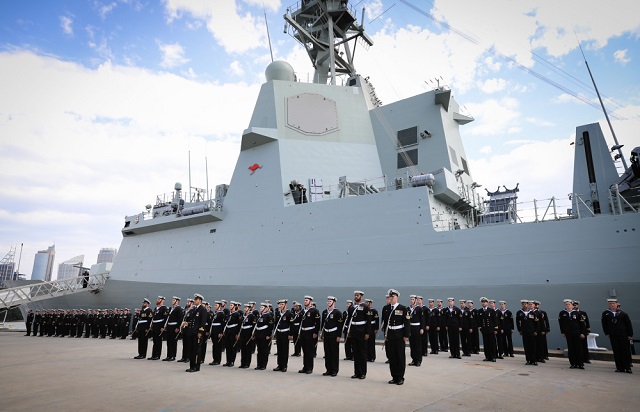