The Rise of Crowdfunding for Marine Energy

Over the last three years marine energy developers have accumulated over $23 million from more than 7,400 people through crowdfunding. This year alone saw a 62 percent increase over the previous year in total funds raised and will likely increase before the year end. Crowdfunding is a rapidly growing trend for marine energy and one that may help the industry more effectively demonstrate its maturity.

The Trench of Death

Raising capital for a new venture is never easy, but it is particularly difficult for those trying to develop marine energy technologies. Commercializing a marine energy technology takes immense patience and capital. This is due to many factors such as: long regulatory and permitting processes, over designing systems to withstand the harsh marine environment and limited access to testing sites. Entrepreneurs often get stuck at the infamous pre-commercial gap or “valley of death” where budding companies need money to demonstrate a prototype or commercial product but can’t yet attract investment because they haven’t demonstrated. Classic Catch-22.

The Valley of Death and the Pre-Commercial Gap for developing a new technology. Source: Sandia National Laboratories

This valley is more of a trench for marine renewables. Many investors see marine energy as a risky investment with a long payback period. A handful of failed projects over the years has not improved their confidence. After the initial wave of capital that flooded into cleantech, the number of venture capital groups and angel investors willing to invest in marine energy has dwindled. In response, marine energy developers are looking to a new way of raising capital: crowdfunding.

Crowdfunding is literally what it sounds like: using a crowd of investors to finance a business venture or project. Investors who use crowdfunding typically invest relatively small amounts into companies, but when pooled with hundreds or thousands of other investors it can result in quite a large sum. Crowdfunding democratizes access to finance and allows marine energy developers to reach a wider pool of potential investors that might be willing to accept higher risk than a bank, thus providing the developer with cheaper capital.

There are four different types of crowdfunding: donor, reward, equity and debt. Donor crowdfunding relies on the altruism and goodwill of people to raise funds. Contributors, or backers, receive nothing in return except a warm fuzzy feeling from having helped someone in need. In a reward crowdfunding model the company seeking funding provides gifts such as watches, bumper stickers or clothing to those who contribute. These rewards typically become more lavish as the amount contributed increases. Backers, do not receive any ownership in the company and don’t expect to receive any interest on their contribution. Familiar examples of this type of crowdfunding are Kickstarter and Indiegogo.

Show Me the Equity

Debt, or loan, based crowdfunding was also made available through Title III. In this method contributors provide companies with debt financing and in return they receive interest payments over a specified duration. Examples of debt crowdfunding include Prosper, Abundance, or LendingClub. 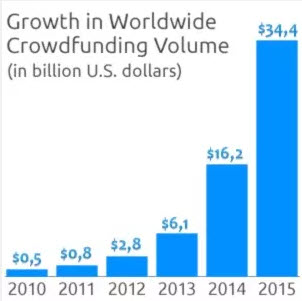 The Pains and Joys of Crowdfunding

Crowdfunding has some obvious benefits for the startup trying to raise money. For starters, it often presents less restrictive capital compared to traditional investor terms. Crowdfunding can be quick. For one recent equity crowdfunding campaign in the U.K., a small-scale wind farm project was able to raise £1.2 million in just 20 minutes. Due to the number of investors, crowdfunding can be a great way to advertise through word of mouth. “Crowdfunding is so much more than just raising money. It helps you to create a tribe of customers, ambassadors and super fans. It brings market validation, access to new investors, promotion and real time feedback.”

There can be negative aspects to crowdfunding. First is the risk of failure and negative public relations.  If the crowdfunding campaign fails to meet its target, this can be a very public signal to future investors. Crowdfunding is by its very nature public and open to everyone and requires the company to divulge a fair bit of sensitive information, this can be unappealing for those companies wishing to fly under the radar.  With a crowd of investors also comes a crowded capitalization table. This table is used to keep track of shares of ownership in the company and is something that any serious investor will want to review. If its filled with hundreds or thousands of small-scale investors that are diluting equity in the company, this can be unattractive to future investors.

Marine Energy for the Masses 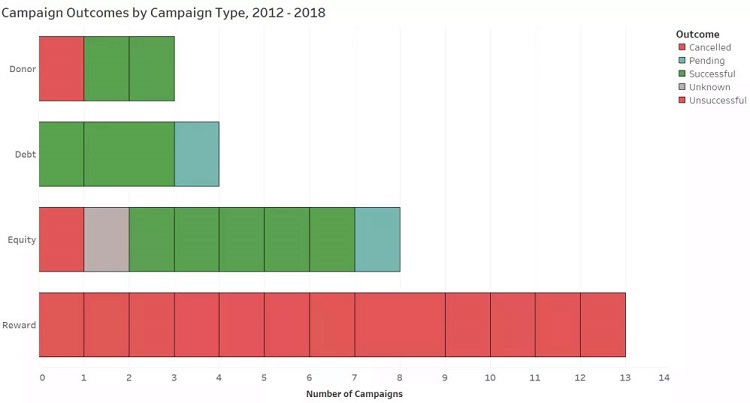 Number of Campaigns by Type 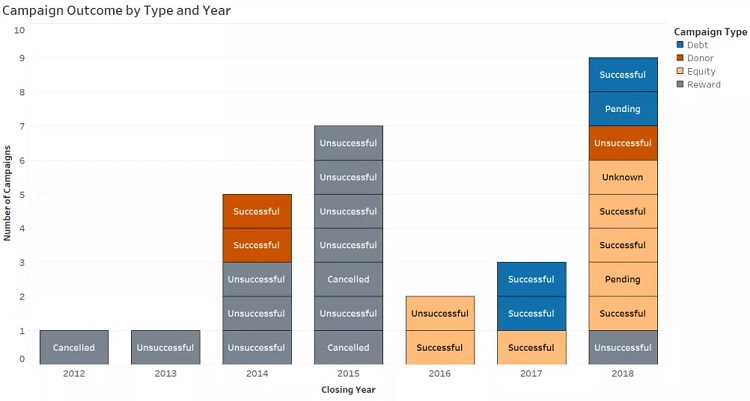 Campaign Outcome by Type and Year

After 2016, things get more interesting. Marine energy crowdfunding switches from reward to equity and debt type campaigns. This switch brings with it increases in total funds raised, success rate, number of contributors and the average amount contributed per backer. For example, between 2012 and 2015 the average contribution was $40, by 2017 the average contribution was over $3,800. 2018 is shaping up to be even better: there have been seven campaigns so far in 2018 (and two more that are active as of this writing) that have collectively raised $12.2 million from more than 3,100 investors. 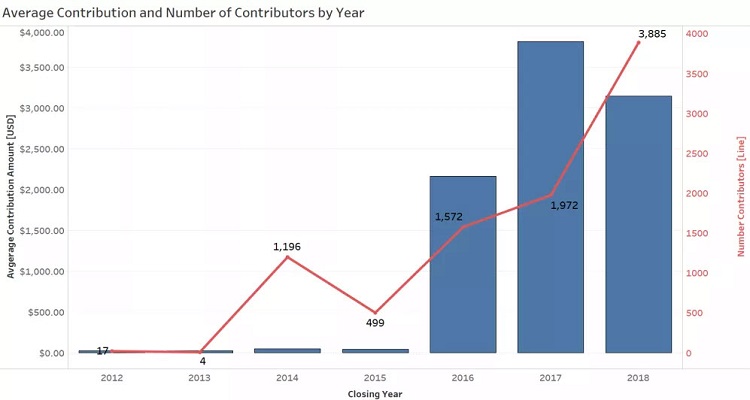 Number of Contributors by Year

$12.2 million may be small in comparison to most of the deals that come out the VC community, but it is not something to dismiss neither. This amount is on par with the size of awards from some government programs that support marine energy R&D, for example the U.S. Department of Energy’s Water Power Technologies Office announced $6.7 million in funding to six awardees this year.  Crowdfunding appears to be rivaling government grants, perhaps with less strings attached. 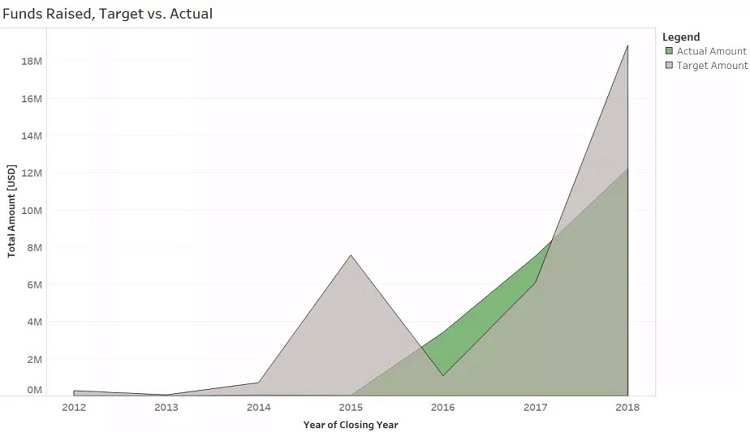 Looking at the the entire dataset from 2012 thru 2018, total contributions are more than $23.1 million. Breaking this number down by technology type, we see that wave energy campaigns attracted $6.9 million, but current energy technologies (river, tidal, ocean current) attracted more than twice that at $15.5 million. This hints at the relative maturity and commercial readiness of the two technology types: perhaps contributors see current energy (i.e. tidal energy) as less risky than wave. 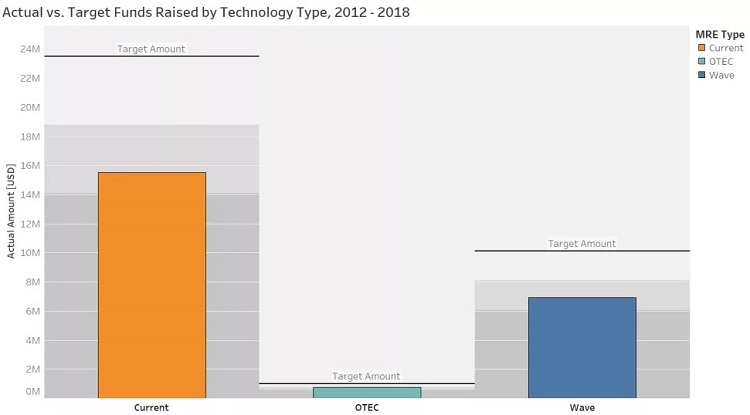 The data tells a convincing story: debt and equity crowdfund campaigns are more likely to be successful than reward type campaigns. There are several possible reasons why. One possibility is that equity crowdfunding is more self-selecting than reward based campaigns; the type of individual attracted to use an equity platform is more informed and more confident in their ability to choose investments and may have more capital to invest.

Another factor is the level of due diligence required. Equity and debt crowdfunding platforms require companies to disclose more information than donor or reward platforms. This could improve investor confidence and reduce information asymmetries that exist between companies and contributors. No matter the type of  campaign the developer must tell a compelling story about how the money will be used.

Crowdfunding has provided marine energy developers access to an unprecedented number of investors and capital. The marine energy’s first foray into crowdfunding through donor and reward type campaigns was a false start, but  debt and equity proved more fruitful. The funding marine energy companies obtain through this new financing mechanism is comparable that provided by some government R&D programs, and is only likely to increase going forward. This is not a silver bullet to marine energy financing woes however. A crowd of investors can be a tremendous asset, but if a company over-promises and under-delivers the crowd could turn into a huge liability. 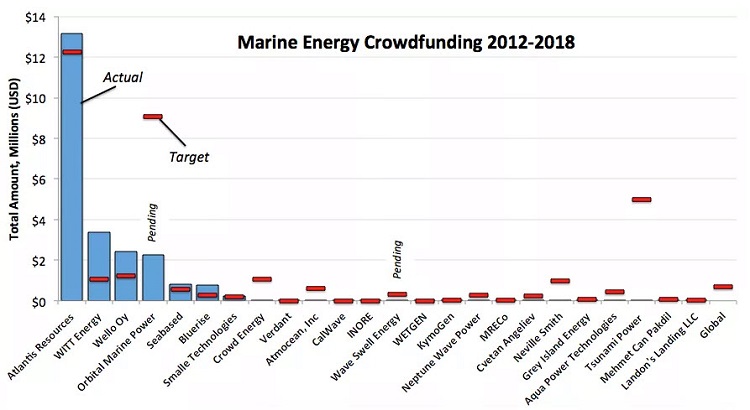