[Op-Ed] The Next Ships to Protect Canada's Arctic

Last week the Canadian press posted much-anticipated design details of the Royal Canadian Navy’s (RCN) next major “combatant,” the Arctic Offshore Patrol Ship (AOPS). Although not the naval icebreakers that the Conservative Party promised many years ago, these ships appear to be finally possibly built, even if the total number is far less than originally envisaged.

Though the first ship is not expected to come down the ways until late 2018, its commanding officer has already been selected. Commander Corey Gleason will proudly take the first of class, HMCS Harry DeWolf, to sea and to the Arctic sometime after she completes her operational shakedown and workups. The optimism within Canadian naval ranks is not unexpected, nor should it be denigrated.

Stephen Harper’s Conservative Party’s original promise early in the millennium to build a fleet of naval icebreakers to “protect Canada’s Arctic” has gradually been rolled back to the design that was detailed in the Globe and Mail. The AOPS we now see is no polar icebreaker by any imagining. Even then, it took some time to get to the realization a naval icebreaker might not be an effective or economical tool of sovereignty projection.

First the reality had to sink in that no navy in the world operates high ice-class icebreakers. This has been due in part to the almost conflicting roles and design requirements of icebreakers and traditional naval combat vessels and also in part to the difficulty in building the level of experience and competence of senior seagoing officers in ice navigation.  Ice navigation skills and competencies are not acquired overnight, any more than the skills to fight a warship are.

Internationally, the closest that one can describe as naval icebreakers are those operated by the small navies of Norway and Denmark. The Danish Rasmussen Class and the Norwegian Svalbard Class (the latter of the two classes is more or less the model the Canadian DeWolf Class AOPS is patterned after) could be more accurately described as coast guard ships on steroids rather than naval ships built to hammer through polar ice. Even Russia has always left its icebreaking and polar coastal presence to civilian-crewed, non-naval vessels.

The closest example of a naval icebreaker is perhaps the U.S. Coast Guard’s two Polar Class ships, built to high ice-class design and naval compartmentalization standards. Never fitted with armament other than that required by the constabulary role of the U.S. Coast Guard, the Polar Sea and Polar Star were never intended for naval operation. Building ships even remotely meeting true icebreaker standards and heavy combatant standards together would burden any nation with exorbitant construction and ongoing operational costs.

Since the Harper government’s declaration of intent to build Canadian naval icebreakers, the RCN has had to grapple with what exactly it was being asked to take on, and how. The RCN has had to create missions and roles that had for the most been left to the Canadian Coast Guard, well accustomed to operating icebreakers in the Arctic and the remainder of Canada’s ice-infested waters.

To fill these new naval roles, what manner of ship was actually needed versus desired? The fleet of naval polar icebreakers eventually morphed into a lesser class of ice-capable ships as the mission parameters became more defined. The Canadian press, quick to see the quiet downgrading of expectations, soon came to refer to the planned ships as “slush breakers.”

The RCN will be taking ownership of ships that many experienced in Arctic ice operations and North Atlantic patrol believe are neither good icebreakers nor good offshore patrol vessels. The compromises made to enable the AOPS to operate in both environments make them less efficient in both. Their ice class is low, able only to deal with level first-year ice, and their hull form being somewhat optimized for ice will not provide the best sea-keeping capability or higher speeds normally expected of an offshore patrol vessel in the winter North Atlantic. 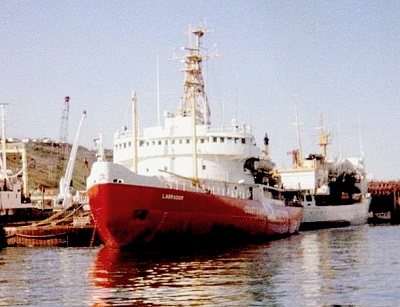 In reality, increasing Canadian presence to enhance sovereignty may not even be truly necessary. After all, the Canadian navy has been virtually absent from the Arctic throughout most of the cold war after HMCS Labrador was transferred to the Canadian Coast Guard in the late Fifties.

Canada already clearly has a very visible sovereign presence. A permanent presence is represented by the proud resident Canadian Rangers with their characteristic red jumpers alongside numerous local Royal Canadian Mounted Police detachments that together have been the everlasting symbol of Canadian sovereignty in the Arctic.

Since the early Fifties Canadian Coast Guard and its predecessor fleet has annually deployed light, medium and heavy icebreakers throughout the Arctic and managed the Eastern Arctic Sealift resupply voyage. Many Canadians believe the Coast Guard could more than adequately accept a more pronounced constabulary role in the Arctic that may be the only real need for expansion of presence in a world of climate change, not a war-fighting capacity that navies focus their skills and competencies in. In any case, soon the RCN will return to the Arctic, but for how long only time will tell.

Regardless of the need, our professional navy will take on these ships with their customary “Ready Aye Ready” and find ways to make them work. Will they live the same short life as their predecessor, the venerable HMCS Labrador, which saw only a few short years of naval service before being quickly handed over to the Canadian Coast Guard to run out the rest of her life? Only time will tell. - MarEx