The A, B, Seas of Corrosion Management

Maintenance due to maritime corrosion comes with a staggering price tag, almost $2.5 trillion per year globally. Proper maritime corrosion management results in a tangible ROI, improved safety, and an operational ability that aligns with existing mandates to address reasonable risks in decision making. As reported in AMPP’s Maritime News, a publication focused on timely information regarding the causes of corrosion and coating solutions for its mitigation, the estimated total cost of just maritime corrosion worldwide is between $50-$80 billion annually.

In a new multi-author e-book published by AMPP, Never Again: Marine Environment, marine coatings experts recall days “in the field” when they were faced with a problem—such as premature coating failures—determined a cause and developed a solution. Throughout the book, SMEs share such insights as how often, in the hurry to accomplish work on schedule, conditions are overlooked that can be extremely detrimental to the final installed coating film, and it ultimately causes huge setbacks; to the point that asset owners, contractors, and even design engineers slap their foreheads and say out loud: Never Again! 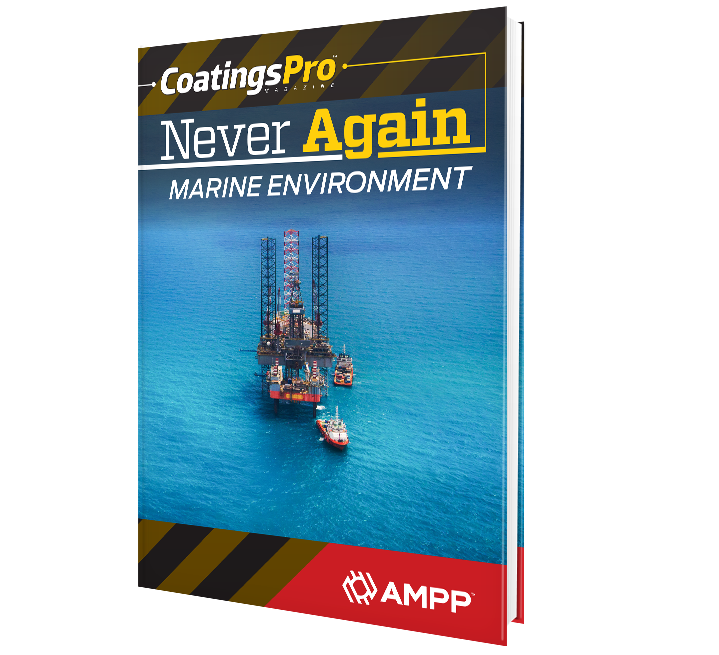 AMPP has recently published Never Again: Marine Environment, which focuses on case studies—problems and their solutions—involving a number of premature coatings failures in the maritime industry.

Like a good mystery, chapters touch upon such topics as marine coating systems and antifouling topcoats, the loss of adhesion and delamination of ship coatings, the failure of a separator onboard a FPSO, and even the importance of not painting a structure during a windstorm.

One chapter in particular is focused on a ship’s hull that was subjected to varying and often harsh conditions. In particular, the keel-to-waterline area of the shipping vessel had to withstand corrosion, temperature variation, ice, and marine growth.

Marine coating systems are designed, applied, and maintained so that a ship has the long-term protection of an impermeable barrier that resists corrosion and limits the growth of subaquatic organisms.

The coating system on freighters, ships, and boats should be applied in multiple layers.  First, layers of epoxy primers are applied to protect the metal surface of the ship from corrosion and abrasion and to provide a tough, smooth substrate upon which additional paint layers are applied.  Those subsequent paint layers are called “antifouling topcoats.”

Fouling refers to the plants, weeds, algae, barnacles, and other marine organisms that grow on hulls of ships. Therefore, antifouling coatings refer to paints that prevent all marine hitchhikers from sticking to, growing on, and slowing down the ship.

If any of the layers of primer or topcoat paint in the marine coating system are not applied according to their specifications — with the proper surface preparation, mix ratio, dry film thickness, and the right drying time and conditions — then the coating integrity, service life, and overall efficiency in the water may suffer.

In the case of a shipping company with vessels on the Great Lakes, the paint on the underside of one of its ships was coming off in large sheets, and company owners wanted to get to the bottom of the problem. And they did; you have to read the book to find out how.

An Investigation into Delamination

Another chapter focused on a delamination problem that was repeatedly occurring on a bulkhead.  In fact, in 2012, the construction of the next generation of ships came to a fast and complete stop after a customer discovered that a recently applied fireproof coating had failed. Although a previously employed system from years past — a solvent-borne primer, water-borne intumescent coating, and topcoat — worked, the shipyard had moved to a different primer with this new generation of ships. That’s where the problems started.

The paint supplier had put numerous certified letters indicating that the coating system was flawless. The shipyard believed that the sub-contracted coatings applicator was responsible for the coating failure. And despite the delamination issues, the shipyard had the contractors re-coat the next generation of ships with the same system. Another year went by, and the customer again started noticing coating failures. Some parts of the bulkhead paint were falling like a “hangout rug” to the floor, while other parts of the bulkhead still had paint intact. Something had to be done.

Modern ships are constructed in sections, which are then combined to turn into blocks, which then turn into major blocks until, in the end, the individual pieces make a ship. Each block is made of several bulkheads and decks.

On this project, it was long internally discussed and decided that to save money and time, they would have the Holland profile and bulkheads in the ship blocks blasted to an Sa 2½: Very Thorough Blast Cleaning according to ISO 12944, which is the equivalent of a NACE No. 2/SSPC Surface Preparation (SP) 10: Near-White Blast Cleaning. Then they were painted with a two-component anti-corrosive epoxy coating rich in zinc particles. This way, the shipyard would be able to “skip” out on applying the primer that the manufacturing company intended to be used with the water-borne intumescent paint and thus apply the intumescent directly on top of the zinc coating. The intumescent was then to be covered in a topcoat.

The topcoat manufacturer had agreed in writing to the primer change and additionally sent literature proving that both products did work under laboratory conditions without any problems. This manufacturer did certify in writing that this particular system had worked under laboratory conditions, thus providing the shipyard with confidence to apply the intumescent paint on top of the zinc coating. The lab tests were conducted under special enclosed conditions at ambient temperatures and on test plates that were 30 by 30 cm (11.8 x 11.8 in). In fact, often many paint manufacturers apply their coating over other manufacturer’s coatings that have been previously applied, and years go by without having any problems. However, that was not the case here.

This message is sponsored by the Association for Materials Protection and Performance (AMPP). To find out more about this maritime corrosion solutions, and others, visit the AMPP Store.