Thomas Wilhelmsen isn’t shy about stepping forward. The Wilhelmsen CEO wants his group to lead maritime from the front, utilizing a blend of the traditional and the transformational to steer the business, and the entire industry, on a value added voyage into the future. All aboard…

“I don’t want this company to be seen as some kind of digital whizz kid.”

“There’s been a lot of focus on Massterly, our drone developments, smart rope, 3D printing etc. etc., and on one level that’s excellent,” notes the Wilhelmsen Group CEO, “but it’s hard-core, practical and operational maritime competency that forms the foundation of this business.

“What we want to do is take that conventional platform and utilize new digital skills to build upon it, positioning ourselves to take advantage of future business opportunity.

“It’s about a balance, a union, not one thing or the other – but two competencies informing and feeding off one another to shape a better business, a better industry. One that delivers enhanced value, transparency and sustainability. That’s Wilhelmsen.”

The 43-year-old is head of one of maritime’s biggest names. The group has close to 15,000 employees of which over 9,000 are seafarers. Wilhelmsen Ship Management serves nearly 400 vessels globally, while Wilhelmsen Ships Service handles approximately 75,000 ports calls (2017), making around 210,000 product deliveries a year (or one delivery every three minutes) to about 50 percent of the entire global merchant fleet. NorSea Group, in which it owns a 73 percent stake, handled over one million tons of equipment for offshore installations in 2017, while WilNor Governmental Services has established itself as a key NATO supplier, recently providing logistical support for the Trident Juncture exercise in Norway.

And that’s just some select highlights from a 157-year-old concern that achieved an operating profit of $176 million in 2017 from a total income of $793 million.

In other words, Mr Wilhelmsen has a strong foundation to build on.

And building he is.

The formation of Massterly, a joint initiative with Kongsberg, was arguably one of 2018’s most eye-catching maritime stories.

The company aims to establish the infrastructure and services needed to design and operate autonomous vessels, creating, among other things, a network of land-based control centers to monitor and operate a new breed of ships. The first such center, Wilhelmsen reveals, is to be based at the group HQ in Lysaker, Oslo.

“If we want to help shape the future of the industry, not just this business, we have to position ourselves at the vanguard of development,” he explains. “ Autonomous shipping may seem like a distant dream, but, through projects such as the Yara Birkeland (Yara’s battery powered autonomous container ship, launching in 2019), it will be a reality, albeit on a limited scale, very soon.

“There’s a need for the infrastructure and solutions to support that development, and we can achieve commercial advantage by being a first mover in delivering it.”

“Furthermore,” Wilhelmsen continues, “as yet there’s no regulatory framework for autonomous shipping. So, if we can play a key role in enabling developments we can also help inform and mold regulations, using our expertise and experience to steer a course for the future. That’s an exciting opportunity to genuinely shape maritime.”

Even though autonomy may not be for everyone, with an immediate future that looks likely to be confined to short-sea operations, Wilhelmsen believes elements of the new technology will have universal appeal.

“There’s a window of opportunity here,” he states. “The industry will be able to cherry pick relevant systems out of the autonomous domain and install them on existing vessels, enabling next generation conventional shipping. With greater control we can cut emissions, create efficiencies, improve safety and enhance industry sustainability. So we shouldn’t be looking at autonomy in isolation, but rather as a facilitator for nurturing wider development.

“It needn’t be a case of all or nothing.”

But returning to the question of balance, won’t the march of technology eventually undermine the “hard-core maritime competency” the group is built on?

If ships steer themselves and automated processes handle cargoes and deliveries, won’t traditional skills be squeezed out along the way?

Not according to Wilhelmsen.

“There’s always going to be a need for maritime skill, for real operational understanding,” he stresses. “From the design phase through to operations, people need to feed in individual expertise of stability, navigation, loading and discharging, a whole range of different scenarios.

“That knowledge doesn’t stand in opposition to digital competency, it helps inform it.

“As an industry we can’t afford to overlook the ‘old fashioned’ skills, they must be valued and preserved. After all we’re building, not tearing down what’s come before.”

On the subject of building, an interesting stone has just been laid.

At the end of November Wilhelmsen announced the launch of Raa Labs. Backed by a $2 million seed investment, split between the Wilhelmsen group and Wallenius Wilhelmsen, Raa Labs aims to deliver digital solutions to meet industry challenges and realize opportunities, for both Wilhelmsen itself and external customers. For the sake of comparison, think of it as an app developer of sorts, only on a much more ambitious scale.

“We’d been scratching our heads a little about how to open up and create a ‘start-up’ culture, one where we can move quickly to really seize on digital and tech prospects,” Wilhelmsen explains. “We came to the conclusion that our own start-up was the solution. An entity that could serve our business areas but also design digital infrastructure and applications for outside customers, helping them better utilize their data or, for example, enable collaboration or improve environmental performance.

“It’s a digital accelerator the whole industry can use.”

So far Raa has recruited seven team members who, Wilhelmsen says, would never have otherwise considered a career in maritime.

“I’m a little amazed we have attracted digital experts of this caliber… their competence level within their field is incredible,” he notes with admirable candor. “But they understand that shipping is a huge industry with huge potential for digital. As such they can make a genuine difference, impacting upon the future of a sector that transports 90 percent of global trade, as well as within the oil and gas and renewable energy segments.

“With our backing and industry expertise allied to their skills, Raa is in a unique position to create both impact and value. It’s a case of watch this space.” 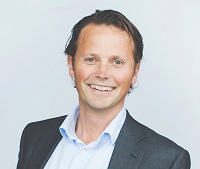 Wilhelmsen’s optimism dials down a couple of notches when considering broader industry prospects for the year ahead.

He’s looking forward to Nor-Shipping, he says, taking place from June 4 to 7, 2019 in Lillestrøm and Oslo, as it “brings the global industry to Norway, showcasing our reputation for innovation and providing a key forum for discussions, ideas and doing business” and applauds its decision to open up its horizons to enable new ocean industry opportunities for its core maritime audience.

“Maritime expertise will be key to generating value from, as well as managing and regulating, the commercial use of ocean space in the future. So Nor-Shipping can play an important role as a platform for enabling developments,” Wilhelmsen says.

That aside he believes the maritime industry is “deep into an up-cycle” raising concerns of a future “correction.”

He adds: “You can see uncertainty creeping into the stock markets. And trade wars and tariffs are obviously not good for this industry. That said, there aren’t that many people who would favor stopping world trade, so I believe, I hope, that common sense will prevail.”

Given his macro economic concerns it’s not surprising to learn that the CEO of this industry giant is exercising caution with regards to group expansion.

“I think the immediate focus will be on organic development,” he concludes. “We’ll aim to nurture and grow all parts of the portfolio. There’s no one standalone area I’d like to pinpoint as a potential star performer, but I do think we’ll use our group strength to continue growing, delivering the value and standards we’re known for and the innovation we believe can help shape this industry.”

And that, at the end of the day, sounds like a pretty well balanced approach.

Alongside Hall A’s focus on Blue Economy, the other halls will feature: