What a roller coaster ride last year was for European iron ore imports! Cargoes to the Old Continent in 2020 are not something to look back to with an 18 percent year-on-year contraction leading to a decrease of Europe's share on the global iron ore market from seven percent in 2019 to 5.5 percent in 2020. Nevertheless, AXSMarine has shared data from its ship and commodity movement platform Trade Flows, indicating iron ore voyages to Europe have been showing signs of revitalization for the past few months.

After a certain event locked down nearly the entire continent in March, Q2 2020 for European iron ore imports registered a historic low, with May and June recording -52 percent and -60 percent year-on-year decreases, respectively. In some particular instances, iron ore imports to France in May or to Germany in June recorded -73 percent reductions year-on-year. During the same period Capesize vessel utilization dropped to less than 45 percent, whereas the market share of the largest vessels in the European iron ore trade traditionally fluctuates around the 55-60 percent mark.

This trend started to reverse from Q3 2020 when imports increased by about 26 percent quarter-on-quarter. While the Netherlands remained the biggest iron ore importer during that period, its demand in Q3 remained on par with Q2, with the main quarter-on-quarter increases coming from France with 107 percent and Germany with 40 percent.

With exports from Brazil remaining suppressed, Canada became Europe's biggest iron ore supplier during Q3, while South Africa overtook Norway in the top three. In the meantime, voyages from Liberia remained steady, increasing the country's market share from three percent in 2019 to over five percent in 2020. This resurgence in iron ore voyages to Europe was carried by the Panamax and OverPanamax fleets, which transported over 40 percent of all European iron ore imports during Q3, whereas their market share traditionally fluctuates between 30 percent and 33 percent. 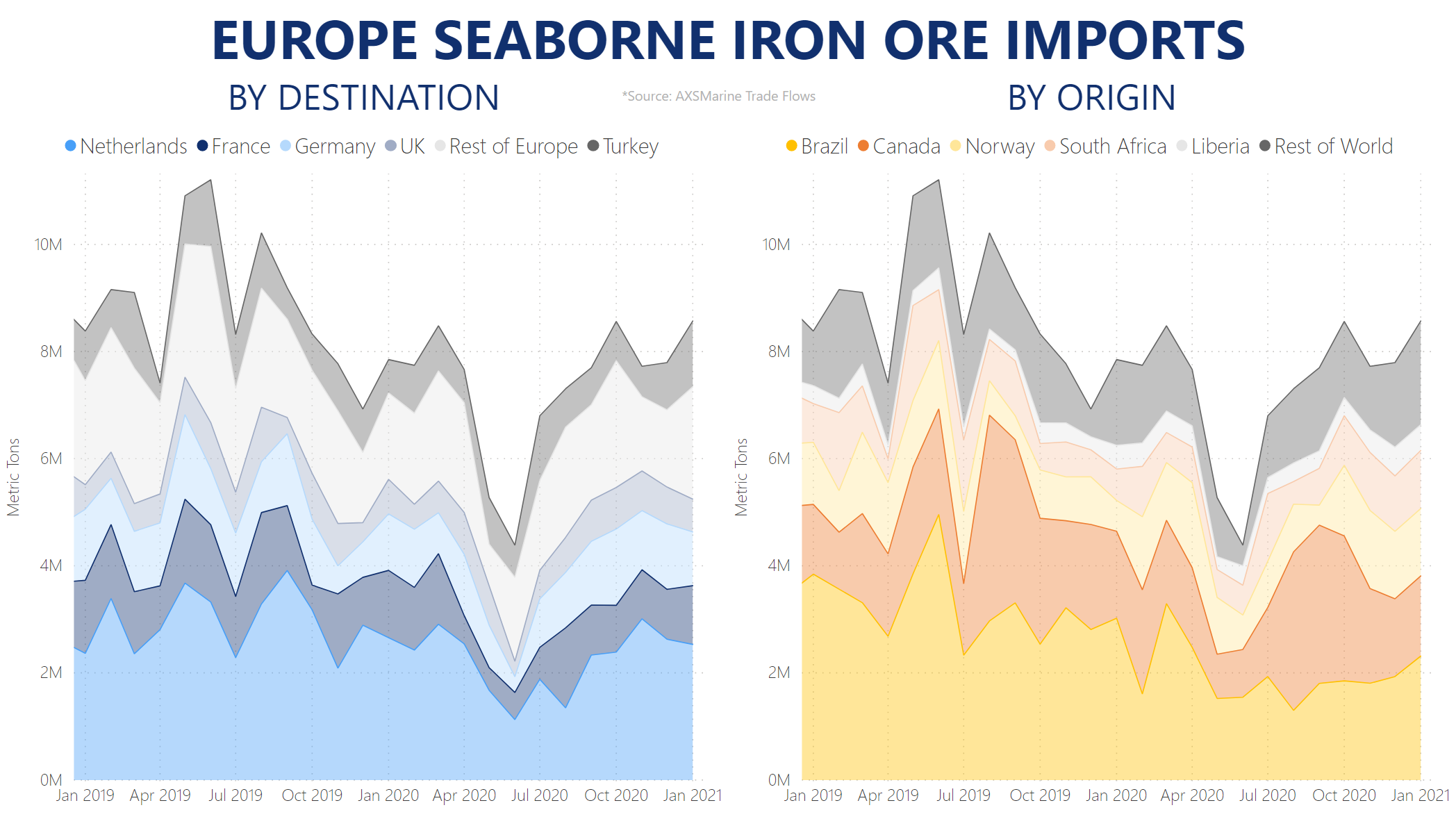 Despite concerns that late-year COVID lockdowns would dictate a suppressed finish to 2020, the revitalization of European seaborne iron ore imports continued into Q4 2020. It turned out to be the strongest quarter of the year, outperforming Q3 by over 10 percent and was even the only quarter to register a year-on-year gain at 5 percent. The main drivers behind it were the Netherlands importing 44 percent more than during the previous quarter for a total of over eight million MT in Q4, Germany adding about 600,000 MT to their 3.1 million MT imported in Q3 for a 20 percent quarter-on-quarter gain, and the UK boosting its iron ore imports by 250,000 MT – 13 percent more than it imported in Q3.

Post-November 2020, Brazil ramped up its exports to Europe, but Canada remained the biggest supplier overall in Q4. Iron ore imports from Norway increased by nearly 90 percent (~1.9 million MT) quarter-on-quarter in Q4, while South Africa and Liberia also boosted their shipments by over 28 percent and 33 percent quarter-on-quarter, respectively, contributing for a total of about one million MT added iron ore.

In the final months of the year, the Capesize fleet made a return to European iron ore trades, transporting 2.5 million MT more cargo than they had done in Q3, for a 25 percent quarter-on-quarter increase. Nevertheless, in October alone the Panamax and OverPanamax fleets registered a rare achievement in this market of carrying more cargo tonnage than their larger counterparts and having the largest market share. 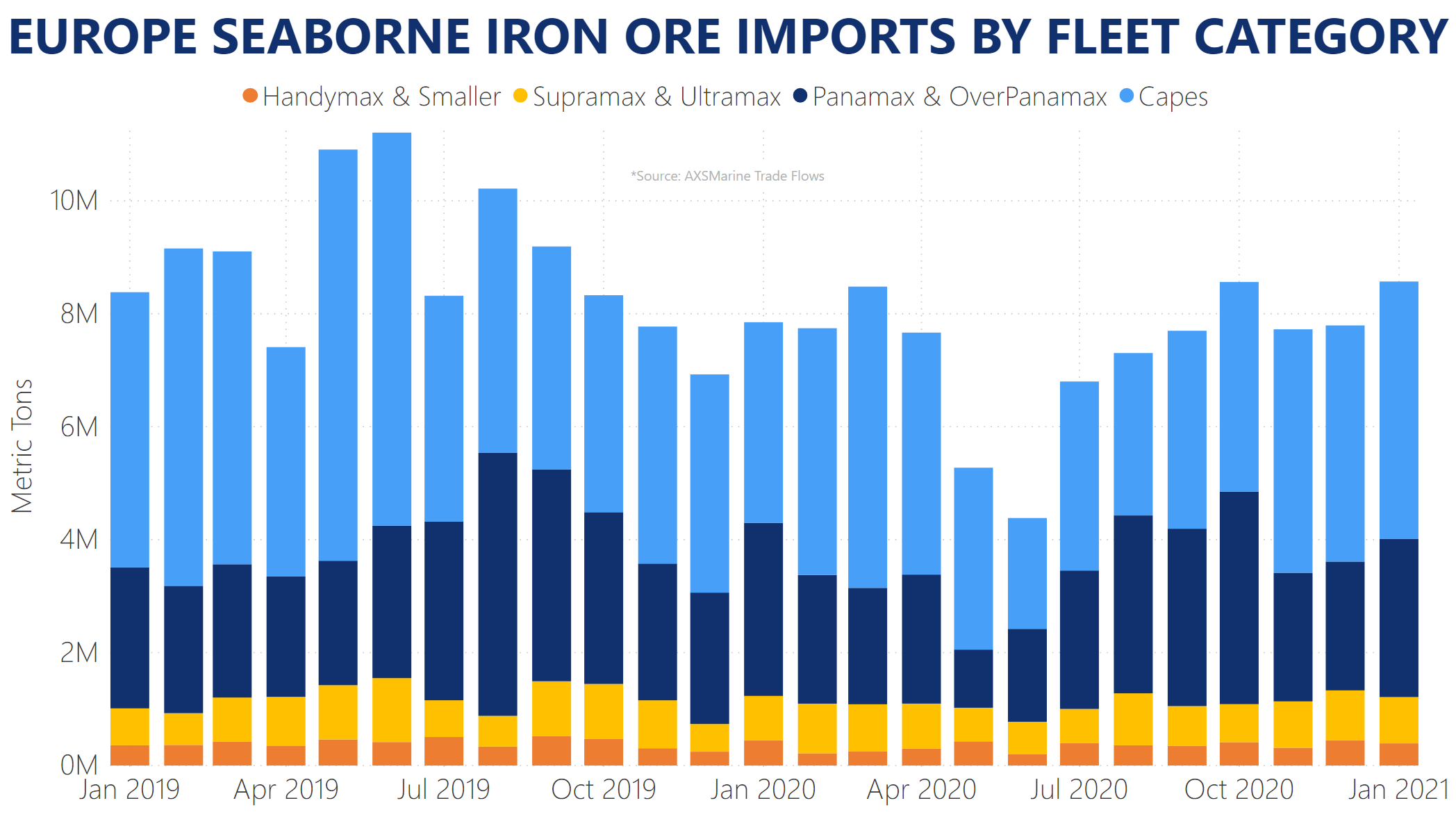 According to AXSMarine data, January and the first weeks of February 2021 continued the upward trend for European iron ore into the new year, registering about a nine percent year-on-year increase, while Capes from Brazilian ports regained their majority in the market. Nevertheless, the market share of the largest vessels still remained six percent below the rolling five-year-average, even if at 53 percent it surpasses the overall utilization of Capes throughout 2020.

This post is sponsored by AXSMarine. Trade Flows is an AXSMarine platform that reveals ship movements, commodity flows, trade patterns and delivers transparency to its users from a macro level down to single-voyage details. It is designed to provide distinctive real-time analysis in modern day fast-pace shipping at a very attractive cost.