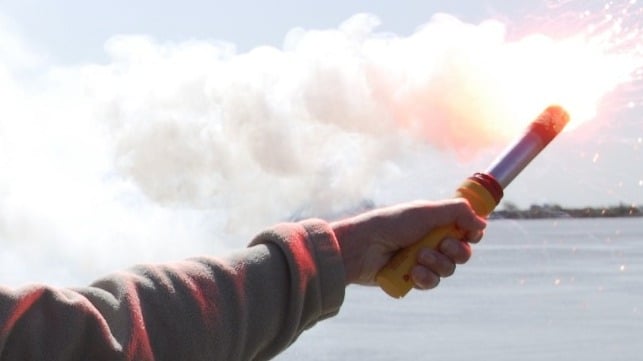 The Civil War Operations of the Revenue Cutter Service

As it would in nearly every war in U.S. history, the U.S. Coast Guard served an important role in the Civil War. During this conflict, the Coast Guard’s ancestor agency of the U.S. Revenue Cutter Service performed a variety of naval combat operations.

By 1860, the Revenue Cutter Service’s fleet was spread across the nation, with cutters stationed in every major American seaport. After the presidential election of Abraham Lincoln, the nation began splitting apart. During these months, men in the service like their counterparts in the Navy and the Army had to choose between serving the federal government or the seceding Southern states, so the service lost most of its cutters in the South. For example, the captain of the Mobile-based cutter Lewis Cass turned over his vessel to state authorities, forcing his officers and crew to travel overland through Secessionist territory to reach the North.

The commanding officer of the New Orleans-based cutter McClelland refused a direct order from Treasury Secretary John Dix to sail his vessel into Northern waters. Dix next ordered the executive officer to arrest the captain, assume command of the cutter and sail the vessel into Northern waters, indicating that the captain should be considered a mutineer if he interfered with the transfer of command. Dix ended his message by writing, “If anyone attempts to haul down the American flag, shoot him on the spot,” a quote that would become famous as a rallying message for Northerners. Unfortunately for Dix, the second-in-command of the McClelland was also a Southern sympathizer and the cutter was turned over to local authorities. In addition to five cutters turned over to Southern authorities, Union forces had to destroy a cutter at the Norfolk Navy Yard before Confederate forces overran the facility.

The war required a major increase in the size of the cutter fleet not only to replace lost cutters, but also to support increased marine safety and law enforcement operations. Six cutters sailed from the Great Lakes for East Coast bases and nine former cutters in the U.S. Coast Survey were transferred back to the Revenue Cutter Service for wartime duty. The service also purchased the steamers Cuyahoga, Miami, Reliance, Northerner and William Seward and built six more steam cutters, which joined the fleet by 1864. These new cutters interdicted rampant smuggling brought on by the war, supplied guardships to Northern ports, and helped enforce the wartime blockade.

Revenue cutters taken by Confederate forces were mainly used in naval operations. Union revenue cutters served in a variety of combat missions. For example, the Harriett Lane, considered the most advanced revenue cutter at the start of the war, fired the Civil War’s first naval shot in April 1861 while attempting to relieve federal forces at Fort Sumter. During the ensuing months, Harriett Lane received orders for escort duty, blockade operations and shore bombardment. In August 1861, the cutter served a central role in the capture of forts at Hatteras Inlet, North Carolina, and was transferred to the Navy to serve as a command ship for Adm. David Dixon Porter in the Union naval campaign against New Orleans.

The cutter Miami also served as a kind of command ship during the war. In late April 1862, Lincoln, War Secretary Edwin Stanton and Treasury Secretary Salmon Chase cruised from Washington, D.C., to Fort Monroe in Hampton Roads, Virginia. Soon thereafter, Lincoln ordered the bombardment of Sewell’s Point, near Norfolk, in preparation for an assault on that city. On May 9, Lincoln ordered a reconnaissance party from the cutter to examine the shore near Norfolk in preparation for landing troops. The next day, Miami covered the landing of six Union regiments, which quickly captured Norfolk after Confederate forces evacuated the city and the Norfolk Navy Yard.

The gunboat Naugatuck proved a unique cutter in the service’s history. Given to the Revenue Cutter Service by New Jersey inventor Edwin Stevens, the gunboat served with the James River Flotilla. In May 1861, Naugatuck assisted in an effort to draw the Confederate ironclad CSS Virginia into a battle in the open waters of Hampton Roads. After the capture of its homeport of Norfolk, Virginia’s crew destroyed their trapped ironclad and Naugatuck steamed up the James River with the USS Monitor and other shallow draft warships to threaten Richmond. Naugatuck’s main armament, 100-pound Parrott gun, burst during the subsequent attack on the earthen fort at Drewry’s Bluff and the cutter withdrew to Hampton Roads with the rest of the Union warships. Naugatuck served the remainder of the war as a guardship in New York Harbor.

The war transformed the Revenue Cutter Service from a collection of obsolete sailing vessels to a primarily steam-driven fleet of cutters. The important operations supported by cutters also cemented the role of the service in such missions as convoy duty, blockade operations, port security, coastal patrol and brown-water combat operations. These missions remained core competencies of the Coast Guard in future combat operations.

In a message repeated every Fourth of July weekend, the U.S. Coast Guard has reminded boaters and vessel operators not to use distress flares as celebratory fireworks - an act that could potentially result in a felony charge and stiff penalties, up to and including prison time.  Flares are an internationally-recognized distress signal and are designed to draw attention to an emergency situation. Lighting flares from vessels will activate a response from the USCG, which may pull resources away from...