Pacific salmon are foundation species to British Columbia’s coastal ecosystem, and have been a key source of nutrients and energy to some of Canada’s most iconic species, including bears and killer whales, for thousands of years. More recently, they have shared their waters with net pens filled with non-native Atlantic salmon that are being farmed for food.

Southern resident killer whales also live in the area, and have been listed as endangered since 2005. These killer whales feed primarily on Chinook salmon, whose shrinking populations are contributing to the decline of these endangered killer whales.

In an effort to try and understand what might be driving these declines, scientists like myself are investigating if the growing number of salmon farms off the B.C. coast may play a role. We’re concerned that pathogens may be spilling over from farmed salmon to wild salmon and contributing to these widespread declines.

In a new study published in Science Advances, we found that a salmon virus that is common on fish farms was introduced to southern B.C. roughly 30 years ago and is continually transmitted between farmed and wild salmon.

Fish farms and the risk of virus spillover

The large number and density of Atlantic salmon within fish farming operations means they have a high risk of developing disease. Since viruses and other infectious agents are commonly found on salmon farms, some scientists have gone as far as to refer to them as “pathogen culture facilities.” Environmental groups and industry regularly debate whether these pathogens spillover and cause disease in wild fish populations.

One of the most discussed viruses is Piscine orthoreovirus (PRV). PRV is common in salmon farming operations and causes heart disease in Atlantic salmon. Yet government and industry groups maintain that PRV is “endemic to B.C.” and poses “no more than a minimal risk” to Fraser River sockeye salmon. The report’s conclusions are often erroneously extrapolated to all species. 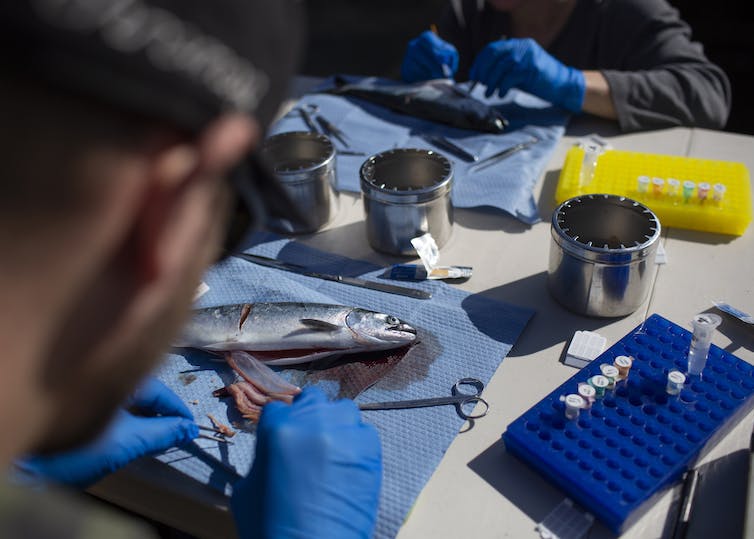 The word “endemic” has two meanings. Ecologists use it to describe plants and animals native to a region. But epidemiologists use it to refer to a continual and stable presence of an infectious agent in a defined area. Regardless of the intended meaning, our analysis found that neither is true.

Genome sequencing can be used to monitor the evolution of a virus — as we’ve seen during the SARS-CoV-2 pandemic. We applied the same techniques to track the paths of different lineages of PRV at different scales, between oceans, but also locally, between different populations of salmon off the coast of B.C.

Mutation rates of viruses are high, and over time, their genomes accumulate genetic differences. These changes to the genome make it possible to understand the origin and dispersal of viruses sampled from different locations.

A PRV lineage found commonly in the North East Pacific came from the North Atlantic. We estimate that it was first introduced to coastal B.C. waters relatively recently, approximately 30 years ago. This matches the timing of Atlantic salmon egg imports from Europe to B.C., which helped kick off salmon farming in the province. 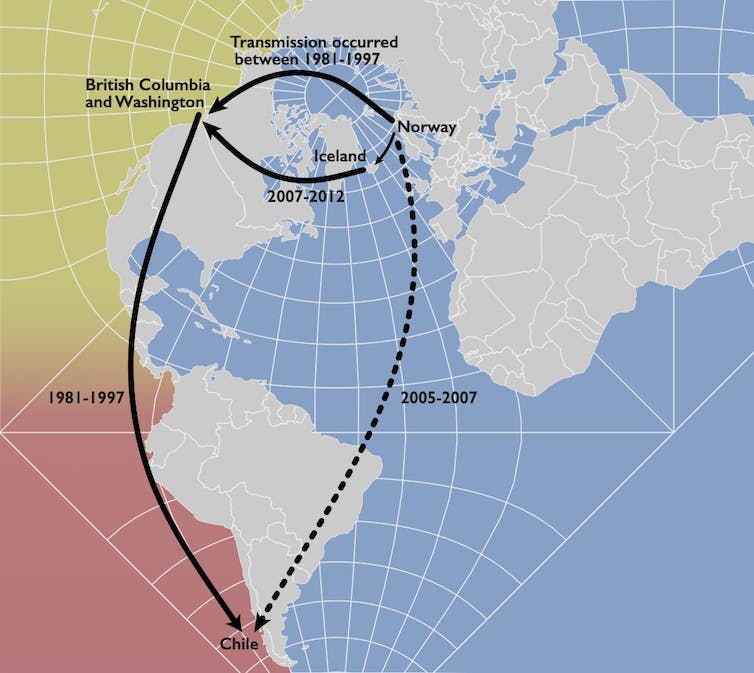 Further analysis of the PRV genomes in B.C. waters indicate that the number of PRV infections in the region has increased by two orders of magnitude over the last two decades, a pattern that aligns with the regional growth in farms, where nearly all of the fish become infected.

All variants of the virus, including the type of PRV found in B.C., cause heart lesions in Atlantic salmon. Research in B.C. has found the same disease associated with PRV on Atlantic salmon farms.

More importantly to the ecology of B.C., PRV has been linked to a different disease in Pacific salmon. In Chinook salmon, PRV is associated with “jaundice/anemia,” a disease that is the result of red blood cells bursting, leading to liver and kidney damage.

Despite the evidence linking PRV to disease in both Atlantic and Chinook salmon, the Department of Fisheries and Oceans (DFO) does not classify PRV as a disease agent. This enables the ocean-based fish farms to be stocked with fish infected with the virus.

Our findings show that salmon farms are a source of infection for wild fish. The research provides evidence that supports growing calls to minimize the interactions between salmon farming and wild fish. Given that DFO’s science and decision-making are not independent, I believe that the regulation of the aquaculture industry should be separated from DFO’s responsibility to protect wild salmon.

Disease interactions with farmed fish impact not only the health of wild salmon, but all that rely on them — including the endangered southern resident killer whale. With so many factors at play, conserving salmon is a daunting process. But a small increase in the survival of juvenile salmon that migrate from rivers out to the open ocean can result in millions more adult salmon returning to their natal spawning grounds, a vital resource to both the ecology and people within coastal British Columbia.

Gideon Mordecai is a postdoctoral fellow at the Department of Medicine at University of British Columbia.