What is ‘screenings material’? How is it handled on land?

Land based wastewater treatment plants (WWTP) use biological treatment to purify the wastewater from our cities, towns and villages. These WWTPs generate a by-product called ‘sewage sludge’, a mixture of surplus natural bacteria and inert particles. WWTPs have another by-product called ‘screenings’. This consists of large debris carried down the sewer, such as rags, paper, plastics, and debris.

The screening material is mostly intercepted by inlet screens positioned at the beginning of a WWTP (photo), or further upstream at sewage pumping stations and storm bypasses. The aim is to prevent clogging or interference with downstream operations and minimise any unsightly floating plastics in receiving waters. Due to marked increase of plastics in sewage since the 1980s, comminutors and grinders used in some small WWTPs have been replaced by screens.

Coarse screens, such as bar screens, typically have openings > 6 mm, and fine screens from 1.5 to 6 mm. Smaller openings result in more screenings of higher water content and organic contents such as faecal matter, and hence worse odour nuisance. Openings of 38 mm and 13 mm intercept about 10 and 60 litres/1,000 m3 of screenings respectively. Finer openings often result in a liquid screenings flow. Environmental protection can be a dirty job. The handling of screenings, or merely the sighting and smell of it, can make a few novice operators throw up.

While sewage sludge is often recycled for agriculture, soil conditioning and landscaping under the strict biosolids regulations, the screenings material it is incinerated or landfilled. Under the European Landfill Directive, screenings material is washed and de-watered to reduce its organic and water content, before it is disposed as a non-hazardous waste (European Waste Code 190801). 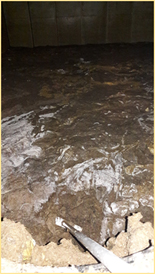 Regulation 11 does prohibit visible floating solids from effluent of sewage treatment plant (STP), but this has not stopped screenings from being discharged in the high seas. Far from it: thousands of physical-chemical STPs are designed and promoted to be switched off when outside 12 nm from the nearest land. Several STPs use ‘fine maceration’ instead of screens to reduce operational input and hygiene risks. While many STPs have screens, their effectiveness may be questionable due to the use of cutter pumps in vacuum collection systems. At times, intercepted screenings may be re-mixed with sewage sludge for discharge.

But when a sewage holding tank is used to feed a STP, the above contributing factors become trivial.

Ships often have designated sewage holding tank(s) of 1-10 days of holding capacity. Once sewage enters these tanks, much of its screenings material tends to form a thick layer of floating scum (photos). This scum layer is not readily broken up by a mixing device, nor is it removed by the transfer pumps serving the STPs or the onshore connections (just as well, because it may block the sewer). The trapped screenings can only be flushed out in the high seas during tank cleaning.

The wastewater industry on land has avoided holding unscreened sewage for a good reason.

The sad conclusion is that, in spite of using STPs, the majority of sewage screenings material ends up directly in the high seas. This practice should stop! The existing marine rules have prohibited the discharge of plastics and garbage from all ships in all waters. Even more so since the rest of our society is working hard to keep sewage screenings away from our natural environment.

There are some discussions at the IMO (PPR 7/16), but they are confined to the STPs. These decisions will not help to prevent screenings discharge from holding tanks and CDS. In fact, the situation will only be worsened by it when ships are given easier solutions by evading STP altogether.

The solutions can be readily available, i.e., to intercept and remove screenings material before it enters the sewage holding tank, the CDS, and the STP, and then dispose it by thermo destruction technologies onboard as already happened on some ships or by the port reception facilities.

It can bring in 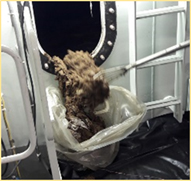 tegrated and consistent regulatory approach to manage ship’s wastes and bring maritime sector on a par with the rest of our society. Then, the shipping industry may justify and sustain the practice of discharging sewage and sewage sludge, free of screenings, in the high seas.

Such initiative requires support by the IMO member states and the industry. Are we ready?