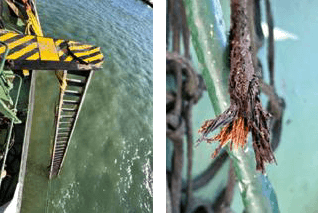 In a recent incident reported to CHIRP, a pilot boarded a ship using a combination rig. After their embarkation, and while the accommodation ladder was being recovered, the wire falls parted, and the accommodation ladder dropped to the sea and trailed in the water as the vessel was underway to the port. The master alerted the pilot to what had happened when the pilot reached the bridge.

A subsequent inspection revealed that the bolts securing the wire had failed. A full port state control inspection took place the next day following a report on the incident. The accommodation ladder had been inspected by a classification society 18 months earlier.

The master undertook remedial action with respect to the accommodation ladder and the fall securing.

The accommodation ladder is often perceived by ships’ crews to be less of a risk because it is a robust structure and viewed as a part of the hull’s structure. Because of these factors, accommodation ladders can be overlooked when undertaking ladder maintenance, especially items such as the hull fixtures to which the wires are affixed. Like the pilot ladder, it is often difficult for a pilot to fully appraise the safety standards of the accommodation ladder’s fittings prior to boarding. This incident shows it is also an area of vulnerability and CHIRP wants to highlight this.

Many vessels, especially bulk carriers and tankers, have accommodation ladders that are positioned on exposed areas of the main deck where heavy seas and spray, combined with cargo residue and dust, can affect the fixtures and fittings and bring about accelerated corrosion. Access is often difficult, hampering inspections and maintenance. Design is a significant latent factor in this incident, which could have had extremely severe consequences for the pilot.

The photographs shown below highlight another failure of a gangway that has just occurred at the time of writing this report where the gangway wire had parted just after the pilot boarded the vessel.

Reducing the periodicity for changing the falls to between 18 and 30 months for vessels that have accommodation ladders in these exposed areas should be considered, as should changes to the design for securing the falls. However, thorough maintenance must always be provided to the wires, sheaves and fixtures no matter how difficult the access to the wires may be.

The International Chamber of Shipping’s (ICS) publication “Shipping Industry Guidance on Pilot Transfer Arrangements, Ensuring Compliance with SOLAS” very clearly describes the safe rigging requirements for pilots, including outlining the responsibilities for shore and on board management plus details for rigging of trapdoor arrangements for combination ladders which is described in IMO resolution A.1045(27).

Some shipping companies employ a permit to work (PtW) system for pilot boarding operations and CHIRP strongly urges all companies to consider adopting this idea as best practice: it is not onerous and can easily be added to the SMS. It would provide assurance to pilots that the vessel takes their safety seriously.

"Pilots have the right to decline to board vessels offering defective boarding arrangements, which can result in serious delay [and] lead to a full port state control inspection with the risk of delay and financial penalties," ICS notes.

The ICS publication makes a very important point with respect to human behavior: “a pilot who has climbed a correctly rigged ladder, and attended by an officer and a deck party, will be in the right frame of mind to give their best attention to the safety of the vessel.” In effect, the pilot’s integration into the bridge team starts at embarkation, and not when they arrive on the bridge.

The CHIRP (Confidential Human Factors Incident Reporting Programme) Charitable Trust has provided a totally independent and confidential safety reporting system to seafarers worldwide since 2013, complementing the reporting system it has offered to the UK aviation industry since 2003. By publishing our analysis of received incident and near-miss reports we raise awareness of safety issues and contribute to improved safety outcomes through all sectors of the maritime industry.