The introduction and operation of ever larger container ships challenges ports to rapidly quickly move increasing volumes of containers through their terminals. One option could involve possible modifications to trucks and trains that move containers.

On August 9, 2019, a ship carrying almost 24,000 TEUs sailed through the Suez Canal, and plans are underway to further develop the canal to transit deeper and possibly wider ships. Within the next few years, major Asian and European container transshipment terminals might have to deepen container ship quaysides to berths ships of up to 20 meters depth and 500 meters length. 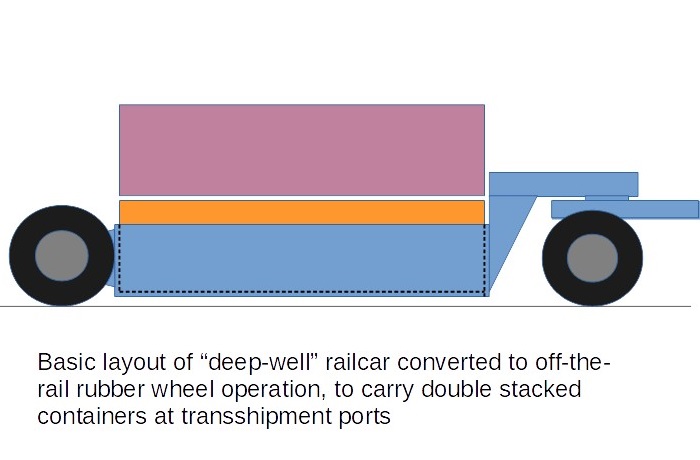 One of the technologies the North American railway system uses to carry double-stacked containers is known as the “deep-well” car that resembles an open box with a ledge built around the inside of the lower perimeter. Standard size shipping containers are lowered into the car to the ledge that is very close to the head of the rail. The sides of the car carry the container weight and transfer it to wheelsets located at both ends of the car. Modifying a deep-well car for on-road operation using rubber wheels within the port area appears possible.

An extension at one end would couple to the articulation located over the rear axles of a yard truck, with various arrangements of rubber rear wheels being possible at the opposite end. The deep-well cars are built to an overall outer width of just under 10 feet or under three meters as compared to regular trailers at 2.5 meter width. Traveling at low speed within the port area, the deep-well trailers would carry double stacked containers, yielding an overall height of 16.5 feet or five meters, greatly improving the productivity of single-stacked port trailers moving containers around the port.

Market acceptance of a deep-well railway chassis converted to rubber tire port operation would depend on an American container port being willing to operate a prototype of such a port vehicle. There may be scope for an American manufacturer to build a lighter weight, low-speed road version of the railway chassis that in port road service would be exempt from the railway structural requirements. To carry the weight of double stacked containers, it could ride on rubber wheels usually applied to large off-road vehicles or use axle arrangements usually applied to extended length logging trucks.

The combination of port logistics and technology would be required to optimize the movement of double stacked container trailers within a given time frame, to increase the number of containers being moved. At some ports, there may be scope to negotiate with local transportation authorities to modify roads that connect between a main container port and a nearby industrial area, to allow passage for special road trailers carrying double stacked containers. In many jurisdictions, transportation departments allow for passage of oversize vehicles along the public roads, usually courtesy of special permits for long-distance operation between cities. 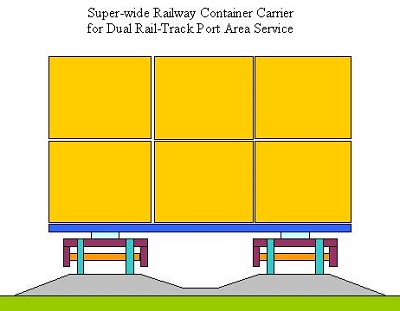 Model railway hobbyists seeking to develop unusual railway technology could consider building a super-wide carriage that covers the width two sets of parallel tracks and rides of parallel sets of railway wheels. The opposite side self-steerable railway bogies or trucks would attach to small-wheeled transverse sub-carriages that would allow for some sideways movement, with the central pivot of a Watts-linkage connecting between the super-wide rail car mid-point and each of the pair of opposite bogies. The (spring-loaded) linkage would allow for spacing variations between the parallel sets of tracks and allow the super-carriage to large-radius negotiate curves.

Each super-wide concept railcar would carry four, five or six parallel rows of containers by four TEUs lengthwise in double or possibly triple stacked configuration. A turntable or series of turntables at the terminal would allow the super railcar to negotiate the equivalent of extremely tight turns. Theoretically, relatively straight parallel tracks with at least 30 feet of vertical clearance could allow trains of super-wide carriages to transfer containers between ships moored lengthwise along extended length quays, or transfer containers between maritime terminal and intermodal truck – railway terminals located 30 to 50 kilometers inland.

As container ships carry increasing numbers of containers that in turn contribute to increased traffic congestion at main maritime container terminals, there is the option of developing rubber-wheel road-based and railway based technologies capable of carrying increased numbers of containers over short distances. American railcar builders could explore the option of developing a rubber-wheel, road-based version of the “deep-well” railway car intended to carry double stacked containers between cities. A willing American container port could open the door to build, test and possibly manufacture port trailers capable of carrying double stacked containers.

Railway hobbyists could explore the possibility of building a scale-model super-wide railcar that rides over parallel sets of railway tracks and including through curved sections of track. There are several innovative technical possibilities in the layout of suspension and wheel arrangements to develop a railcar that rides on four parallel rails, with capability to adjust to changing spacing between the midpoints of the parallel tracks. The concept is a research challenge for hobbyists and students of transportation technology.