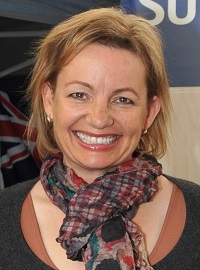 From a childhood in the deserts of the United Arab Emirates to an early life as a mustering pilot then worker in the shearing sheds of Western Queensland, 17 years as a sheep farmer myself and a representative of sheep and wool producers for my entire time in Parliament, I have spent more than half my life close to Australia’s rural and pastoral industries.

I know all the arguments that are used to support the live sheep trade, because I ran them myself for 15 years.

Recently I found cause to look at the industry with fresh eyes.

I have been shocked, angered, bewildered and disappointed. I have researched the science, the facts, the economics and the opinions. I have not allowed emotions to overcome reason.

Only six percent of our sheep and lamb offtake are exported live. Most of these are sourced in Western Australia, and I acknowledge that some farmers in this state will be affected and will move to alternative markets and/or production models.

We export sheep and lamb to 100 countries.

In Western Australia, the mutton price is 20 times greater than it was 20 years ago. Processing has built these markets. We can identify and fast track new development in Western Australia abattoirs and create more jobs and greater value adding.

If we set a five year end date investors can have the certainty and confidence to build new processing capacity.

The live sheep trade is in terminal decline, dropping by two thirds in the last five years. It is based on just two customers in two countries, Kuwait and Qatar who account for 70 percent of exported sheep. The demand for live sheep comes from its cheap retail price due to government subsidies, not cultural or refrigeration reasons. 99 percent of consumers in the Gulf have refrigeration.

These countries are demanding more and more fresh bagged lamb and mutton; value added in Australia and flown over in middle eastern airlines, growing from 260,000 head in 2004 to 2.7 million head in 2016. Our live sheep are discharged into a feedlot, slaughtered and end up under cellophane in a refrigerated mall, next to the chilled product air-freighted from Australia 24 hours earlier.

The litany of animal cruelty in the live sheep trade makes a mockery of the industry’s “no fear no pain” mantra. If the rules were actually enforced – access to feed, water and rest, avoiding high heat stress, no commercial operator would undertake the trade. Exporters have explained to me that it would not be viable. Unfortunately this is an industry with an operating model built on the suffering of animals.

As live export vet Lynn Simpson remarked, “I watched animals suffer and die for 57 voyages. The spectrum of their suffering differed but the true death count has never been declared. It will likely never see the light of day. Like so many animals who died below the water line on a ship in the middle of the ocean.”

I applaud the Agriculture Minister’s strong response to recent footage, but I am not confident that the McCarthy review recommendations will go far enough. A 60 kilogram sheep will be allocated extra space equivalent to just under 2 A4 pieces of paper.

We are told we need more research done on an already questionable heat stress risk model to work out where to draw the line. Perhaps we should accept the existing, overwhelming evidence of poor animal welfare associated with these voyages.

It is farmers who have been deceived by an export industry that has for 33 years and countless second chances been very good at talking the talk and downright culpable when it comes to walking the walk. Exporters do not comply with the rules. Much of the live export chain lies outside Australia’s legal jurisdiction in international waters and overseas countries. As one Western Australian consultant to the trade told me – regulations written on paper in Australia cease to mean anything once the ship departs.

In the modern world, ethics and sustainability in the production of food and fiber are vital. Sanctioning further voyages on these ships of shame, particularly into a middle-eastern summer, damages our brand.

Australians will no longer accept rural export industries with animal welfare practices that are inferior to those our farmers willingly comply with every day. Nor will they understand the logic of putting our clean green sheep meat industry at risk for a sector that is one tenth the size, in decline and actually competes with our domestic production.

Parliamentarians are certainly noting high levels of community outrage: and I give the last word to Mrs Shirley Dale from rural NSW who wrote to me saying: “I am 82 years and in this the last chapter of my life I did not think I would be so moved to want to stand up for any causes – but the plight of these suffering animals cannot be ignored. This is not an issue of economics – it is so much greater than that. It is a test of our humanity – as individuals and as a nation.”

Sussan Ley is Federal Member for Farrer in Australia. Her Live Sheep Long Haul Export Prohibition Bill proposes to amend the Australian Meat and Live-Stock Industry Act 1997 to insert a new which states that a livestock export license is subject to a condition that sheep and lambs must not be exported from Australia, by ship, to a place in the Persian Gulf or the Red Sea – or any other place if the route is through the Persian Gulf or Red Sea in a July, August or September, in the transition period, or at any time after the end of that period, if the duration of that voyage is ten days or more. The transition period is five years.