According to our study, Greenland must lose at least 3.3 percent of its ice to reestablish balance with today's prevailing climate - regardless of future warming.

I’m standing at the edge of the Greenland ice sheet, mesmerized by a mind-blowing scene of natural destruction. A milewide section of glacier front has fractured and is collapsing into the ocean, calving an immense iceberg.

Seracs, giant columns of ice the height of three-story houses, are being tossed around like dice. And the previously submerged portion of this immense block of glacier ice just breached the ocean – a frothing maelstrom flinging ice cubes of several tons high into the air. The resulting tsunami inundates all in its path as it radiates from the glacier’s calving front.

Fortunately, I’m watching from a clifftop a couple of miles away. But even here, I can feel the seismic shocks through the ground. Despite the spectacle, I’m keenly aware that this spells yet more unwelcome news for the world’s low-lying coastlines.

As a field glaciologist, I’ve worked on ice sheets for more than 30 years. In that time, I have witnessed some gobsmacking changes. The past few years in particular have been unnerving for the sheer rate and magnitude of change underway. My revered textbooks taught me that ice sheets respond over millennial time scales, but that’s not what we’re seeing today.

A study published Aug. 29, 2022, demonstrates – for the first time – that Greenland’s ice sheet is now so out of balance with prevailing Arctic climate that it no longer can sustain its current size. It is irreversibly committed to retreat by at least 59,000 square kilometers (22,780 square miles), an area considerably larger than Denmark, Greenland’s protectorate state.

Even if all the greenhouse gas emissions driving global warming ceased today, we find that Greenland’s ice loss under current temperatures will raise global sea level by at least 10.8 inches (27.4 centimeters). That’s more than current models forecast, and it’s a highly conservative estimate. If every year were like 2012, when Greenland experienced a heat wave, that irreversible commitment to sea level rise would triple. That’s an ominous portent given that these are climate conditions we have already seen, not a hypothetical future scenario.

Our study takes a completely new approach – it is based on observations and glaciological theory rather than sophisticated numerical models. The current generation of coupled climate and ice sheet models used to forecast future sea level rise fail to capture the emerging processes that we see amplifying Greenland’s ice loss.

How Greenland got to this point

The Greenland ice sheet is a massive, frozen reservoir that resembles an inverted pudding bowl. The ice is in constant flux, flowing from the interior – where it is over 1.9 miles (3 kilometers) thick, cold and snowy – to its edges, where the ice melts or calves bergs.

In all, the ice sheet locks up enough fresh water to raise global sea level by 24 feet (7.4 meters).

Greenland’s terrestrial ice has existed for about 2.6 million years and has expanded and contracted with two dozen or so “ice age” cycles lasting 70,000 or 100,000 years, punctuated by around 10,000-year warm interglacials. Each glacial is driven by shifts in Earth’s orbit that modulate how much solar radiation reaches the Earth’s surface. These variations are then reinforced by snow reflectivity, or albedo; atmospheric greenhouse gases; and ocean circulation that redistributes that heat around the planet.

We are currently enjoying an interglacial period – the Holocene. For the past 6,000 years Greenland, like the rest of the planet, has benefited from a mild and stable climate with an ice sheet in equilibrium – until recently. Since 1990, as the atmosphere and ocean have warmed under rapidly increasing greenhouse gas emissions, Greenland’s mass balance has gone into the red. Ice losses due to enhanced melt, rain, ice flow and calving now far exceed the net gain from snow accumulation.

What does the future hold?

The critical questions are, how fast is Greenland losing its ice, and what does it mean for future sea level rise?

Greenland’s ice loss has been contributing about 0.04 inches (1 millimeter) per year to global sea level rise over the past decade.

This net loss is split between surface melt and dynamic processes that accelerate outlet glacier flow and are greatly exacerbated by atmospheric and oceanic warming, respectively. Though complex in its manifestation, the concept is simple: Ice sheets don’t like warm weather or baths, and the heat is on. 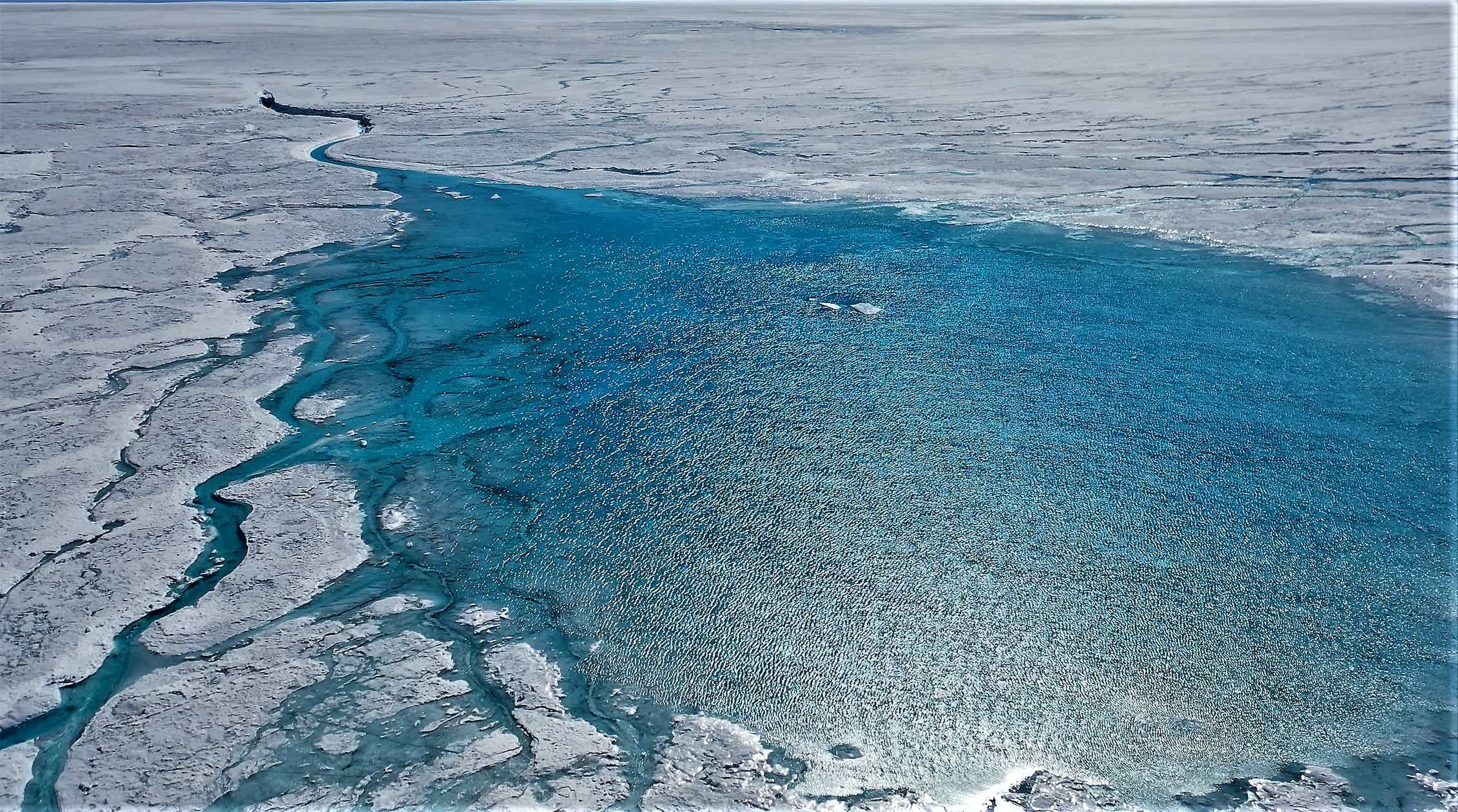 Meltwater lakes feed rivers that snake across the ice sheet - until they encounter a moulin. Alun Hubbard

What the future will bring is trickier to answer.

The models used by the Intergovernmental Panel on Climate Change predict a sea level rise contribution from Greenland of around 4 inches (10 centimeters) by 2100, with a worst-case scenario of 6 inches (15 centimeters).

But that prediction is at odds with what field scientists are witnessing from the ice sheet itself.

According to our findings, Greenland will lose at least 3.3 percent of its ice, over 100 trillion metric tons. This loss is already committed – ice that must melt and calve icebergs to reestablish Greenland’s balance with prevailing climate.

We’re observing many emerging processes that the models don’t account for that increase the ice sheet’s vulnerability. For example:

- Large tracts of the ice surface are undergoing bio-albedo darkening, which accelerates surface melt, as well as the impact of snow melting and refreezing at the surface. These darker surfaces absorb more solar radiation, driving yet more melt. 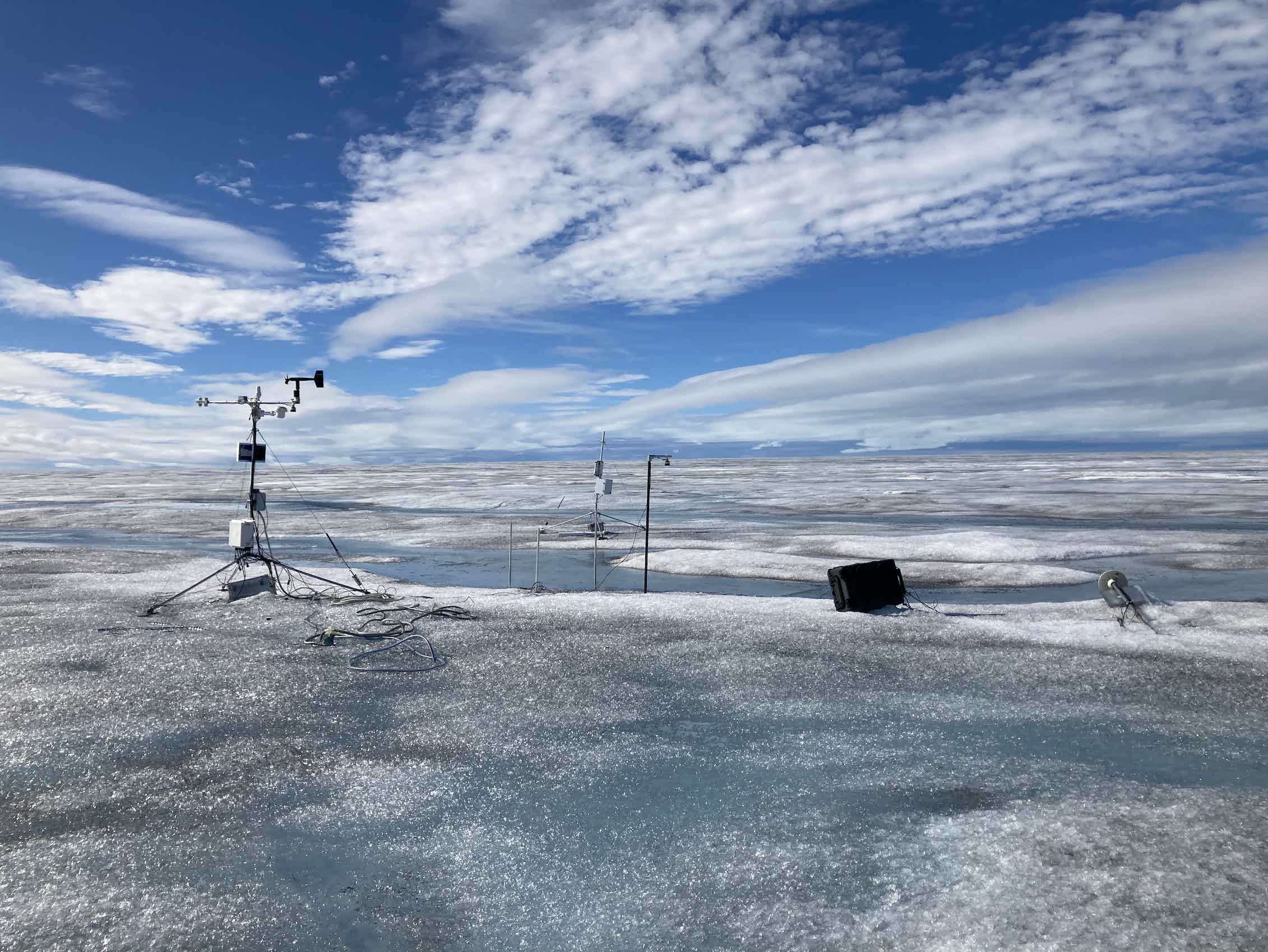 - Supraglacial lakes and river networks are draining into fractures and moulins, bringing with them vast quantities of latent heat. This “cryo-hydraulic warming” within and at the base of the ice sheet softens and thaws the bed, thereby accelerating interior ice flow down to the margins.

The issue with models

Part of the problem is that the models used for forecasting are mathematical abstractions that include only processes that are fully understood, quantifiable and deemed important.

Models reduce reality to a set of equations that are solved repeatedly on banks of very fast computers. Anyone into cutting-edge engineering – including me – knows the intrinsic value of models for experimentation and testing of ideas. But they are no substitute for reality and observation. It is apparent that current model forecasts of global sea level rise underestimate its actual threat over the 21st century. Developers are making constant improvements, but it’s tricky, and there’s a dawning realization that the complex models used for long-term sea level forecasting are not fit for purpose. 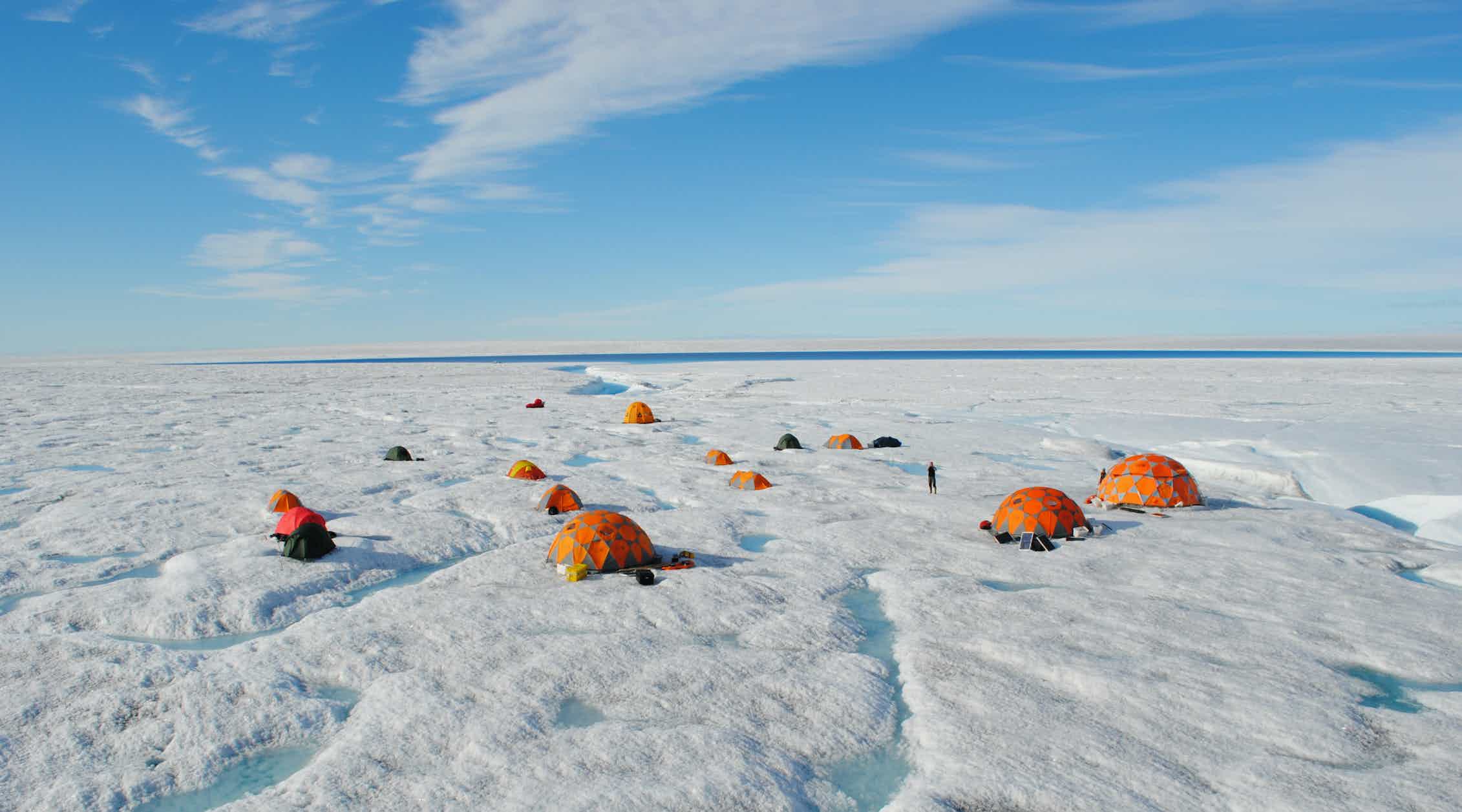 There are also “unknown unknowns” – those processes and feedbacks that we don’t yet realize and that models can never anticipate. They can be understood only by direct observations and literally drilling into the ice.

That’s why, rather than using models, we base our study on proven glaciological theory constrained by two decades of actual measurements from weather stations, satellites and ice geophysics.

It’s not too late

It’s an understatement that the societal stakes are high, and the risk is tragically real going forward. The consequences of catastrophic coastal flooding as sea level rises are still unimaginable to the majority of the billion or so people who live in low-lying coastal zones of the planet.

Personally, I remain hopeful that we can get on track. I don’t believe we’ve passed any doom-laden tipping point that irreversibly floods the planet’s coastlines. Of what I understand of the ice sheet and the insight our new study brings, it’s not too late to act.

But fossil fuels and emissions must be curtailed now, because time is short and the water rises – faster than forecast.

Alun Hubbard is a professor of glaciology at the University of Tromso. He holds an independent Arctic Five research professorship to address the long-term stability and environmental legacy of the cryosphere and its impact on global sea-level, the carbon-cycle, and broader impacts on society and landscape. His approach uses novel field-data to constrain models with live projects across the Arctic with a specific focus on Greenland and the Barents, but he also works in Patagonia, Alaska, Asia and Antarctica.