Deep-Sea Mining Could Threaten the Search for New Antibiotics

Prof. Mat Upton is a medical microbiologist and Dr Kerry Howell is a deep-sea marine ecologist. At the University of Plymouth they have discovered antimicrobial properties in bacteria that live in a species of deep-sea sponge ­– a potential breakthrough in the fight against antibiotic-resistant superbugs. But they warn that such potential could be lost in the drive to exploit the ocean floor for minerals.

Jessica Aldred (JA): What did you discover and how?

Mat Upton (MU): We’ve grown bacteria from the sponges that Kerry has retrieved from the deep-sea floor and tested them in the lab to see if they kill other bacteria.

Kerry Howell (KH): Sponges are one of the most promising sources of potential medical uses, with 145 reported antimicrobial compounds isolated between 2001 and 2010.

However, almost all research undertaken so far has been on sponges from shallow waters. At Plymouth we have begun to look at a number of different deep-sea sponge species. One that has shown promising results is from the genus Euplectella, found between 700 to 1,700 metres deep in the north-east Atlantic.

It is one of the best studied deep-sea regions in the world, but for many of the species we are working on, we don’t even have the most basic information beyond their identity.

MU: By combining our expertise, we have begun to investigate the unknown microbiomes of several deep-sea sponges. Through this work, using cutting-edge DNA-sequencing technologies and novel strategies to maximise the diversity of bacteria we can grow from sponge samples, we have been able to isolate novel bacteria that produce antibiotic compounds that kill drug-resistant pathogens, including superbugs like MRSA and E coli.

JA: Antimicrobial resistance (AMR) is one of the biggest threats to global human health. How do your findings help?

In the case of our work on deep-sea sponges, it has been demonstrated in a number of studies that individual sponge species harbour relatively specific bacterial populations. The number of sponge species present in these unseen deep-sea environments has not been determined. It is likely that there are many new to science in these locations, each one with the potential of hosting new bacteria. These novel bacteria in turn are likely to produce antibiotics, and other medicines, that are new to science. We have only looked in detail at the microbiomes of two or three different sponge species and we’ve already potentially found some new antibiotics. Expand this to other sponge species we have not even seen and the possibilities are clear.

We’ve also only just begun to look at antibiotic compounds. There are many other lines of enquiry into medically relevant compounds that we’ve not started. Sponges and their microbial populations can produce anti-cancer compounds, analgesics, immune modulators and many other bioactive compounds.

KH: There is a real possibility that with the onset of deep-sea mining we could be destroying species that have important biomedical potential before we even know they exist. We may also be having an impact on the other ecosystem services that the deep sea provides, like climate regulation. At present our lack of understanding means it is difficult to predict potential outcomes beyond the obvious negative consequences. This, in turn, makes it difficult to make informed decisions about how this new industry operates and is managed. 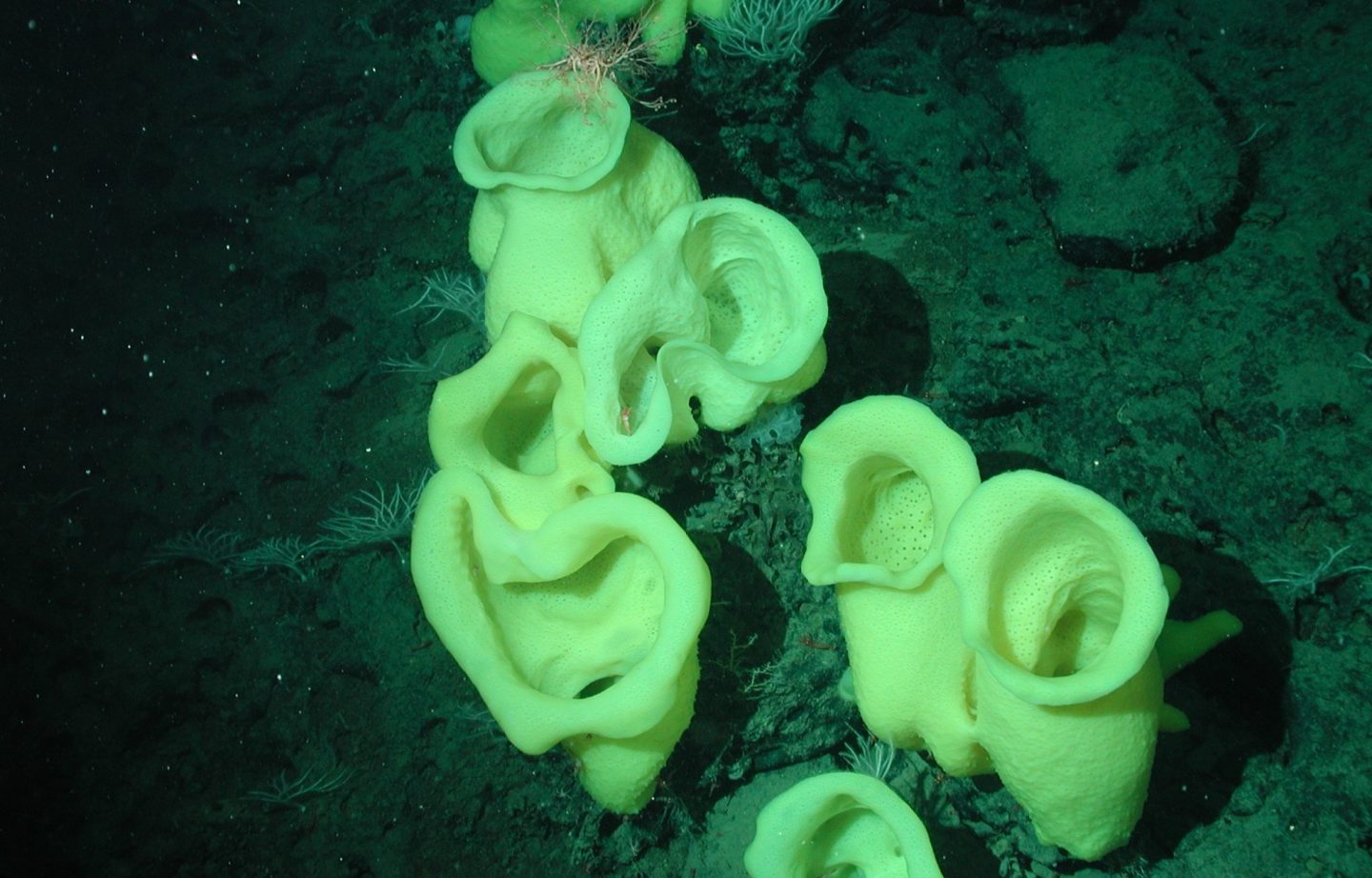 JA: How significant is your discovery?

MU: By looking at the DNA of the bacteria that we have grown from the sponges, we can see that they are not the same as anything that has been grown previously. Some are closely related to previously seen bacteria, but others appear to be really quite novel, possibly new species. We have purified some antibiotic compounds from these bacteria and they are also new to science.

JA: The International Seabed Authority met in July to continue negotiations over a mining code that would govern eventual exploitation. Would mining threaten these sponge species?

KH: Deep-sea mining is a new industry in development. There are three types of deep-sea mining resource recognised, all pertaining to different deep-sea habitats. Polymetallic nodules are found on the abyssal plain, polymetallic sulphides are present as hydrothermal vents, and ferromanganese crusts on some seamounts and ridges.

All of these different resources offer a potential supply of important metals, rare earth elements and other minerals that are used in electronics and the renewable energy sector. We currently stand on the brink of exploitation of the deep sea for these resources. But as we may gain in one way, we potentially lose out in another.

We know that society’s wellbeing is linked to the health of the deep sea through a wide range of ecosystem services as diverse as climate regulation to food security. As a result of our work, we now know that deep-sea species may also hold the key to the problem of antibiotic resistance. What we don’t know is the impact mining will have on the deep-sea ecosystem.

Mining is, by its very nature, destructive, and will result in the destruction of species and habitats. Our knowledge of deep-sea species and habitats remains sparse. This is perhaps highlighted by the fact that recent studies of the main area licensed for polymetallic nodule mining, the Clarion-Clipperton Fracture Zone in the central Pacific, have found up to 90 percent of species sampled were new to science.

JA: More and more scientists are calling for a moratorium on deep-sea mining until more is known about the species and the potential damage that mining will cause. What would you like to see happen?

KH: Our ecological knowledge of the deep sea has not kept pace with industrial development. There needs to be significant coordinated global effort and investment in research to enable us to forecast potential impacts of mining activities, as well as effects of cumulative stressors such as mining, climate change and fishing acting together.

Only then can we hope to effectively manage, not just this industry, but our oceans as a whole in line with UN Sustainable Development Goal 14. The UN Decade of Ocean Science (2021-2030) offers a 10-year period in which such efforts could be made.
A 10-year moratorium on mining in the Area (international waters that belong to no one nation), coupled with a global programme of targeted deep-sea research, would be the precautionary way to move forward.

JA: The high seas treaty that is currently being negotiated includes who shares the rights to marine genetic resources. Will this treaty help the situation?

KH: The treaty will support the sustainable management of areas of biodiversity beyond national jurisdiction by providing legal mechanisms and processes through which coordinated management actions, including the designation of marine protected areas, can happen. At the moment human activities in these areas are managed by a plethora of different organisations and there is no mechanism for a coordinated approach.

For example, we could have a situation where a regional fisheries management organisation has closed an area to bottom trawling for the protection of vulnerable marine ecosystems, but that same area is then licensed for deep-sea mining exploration. The same area could also support species that have promising medical uses, or be very important to other ecosystem services. We need to take a holistic approach but such an approach needs legal processes and mechanisms to be put in place, and that is what I hope this treaty will do. It will also hopefully mean that all nations benefit from potential discoveries, not just those with the technology to exploit these very difficult to study deep-sea habitats.