Railway lines extend into many ports internationally while main railway marshalling yards may be located at a distance from quayside. While diesel locomotives are used for port service railway propulsion, several carbon-free options are available and becoming available.

The interlining between ships and railways dates back into the 1800s. For many decades, steam powered locomotives pulled railway freight cars to quayside to load cargo on to ships or to offload cargo. From the early days, train length exceeded ship length and required that the locomotive periodically move each train section by section, a practice that continued into the diesel era. At majority of terminals involving trains parked at quayside, locomotive diesel engines remain running at idle speed between each section by section train movement. Some ports use slug locomotives that source electric power from companion diesel locomotives.

Over the decades, the variety of non-diesel powered short-distance shunting type railway locomotives has included fireless steam (which uses industrial steam as an energy source), lead-acid batteries that connect to the power grid for recharge, and compressed air for mines. While lithium-ion batteries appear ideal in terms of energy density, the drawbacks include a reduction of energy storage capacity when subject to repeated deep discharge operation, with some examples delivering only 50 percent of original capacity after 5,000 deep discharges. A variety of energy storage technologies capable of repeated deep-discharge operation are becoming available and with potential for locomotive application.

While any of modern solar PV technology, wind energy conversion and hydroelectric power provides carbon-free electric power, new advances are occurring in the area of molten salt nuclear technology. The new nuclear technology is purported as being capable of generating thermal energy at low cost from spent nuclear fuel rods that had previously being used in earlier generation nuclear power stations. There may be scope for new generation molten salt reactors to generate power within close proximity to maritime ports and provide the combination of heat and power to a variety of large-scale maritime related commercial vehicles.

Fireless steam locomotives operated on a thermal battery where thermal energy was stored in the heat capacity of saturated water kept under high pressure (up to 1,000 psia or 6.9 MPa) and high temperature at 545 deg F (285 deg C) inside the equivalent of an insulated thermos bottle. Advances in high-temperature solar thermal power conversion and also in modern high-temperature nuclear power include the development of molten salt and molten metal thermal energy storage compounds that operate using heat capacity. A thermostat circuit involving pipes containing liquid metal can transfer heat from storage and deliver the heat at constant temperature.

Heat from thermal storage is able to activate thermoacoustic converters that convert heat into a standing wave inside a pressure tube containing gas. The wave activates a linear alternator that can each deliver up to 100 kW of electric power. A bank of 20 thermoacoustic engines could deliver equivalent power as a locomotive engine, charging banks of ultra-capacitors that would repeatedly provide electric energy to locomotive traction motors to move a train section-by-section. Thermal energy storage technology is capable of hundreds of thousands of repeated deep-cycle discharges while maintain near maximum energy storage capacity.

Compressed air energy storage was widely used in mining locomotives that pulled ore trains from mines. Air was cooled as it was being pumped into the locomotive storage tanks, with heat transferred into an onboard thermal storage tank that would pre-heat air prior to expansion in locomotive cylinders. In this modern era, several companies are developing and exploring development of liquid air energy storage, where air is super-cooled to the liquid state and then stored inside heavily insulated tanks. While liquid air storage can be used for grid-scale energy storage, it has been tested and demonstrated in vehicular propulsion.

Liquid air technology offers the advantage of rapid recharge when liquid air is transferred through insulated pipes from large stationary storage tanks to insulated mobile storage tanks. If a thermal power station is located within close proximity of a maritime port, the combination of low temperature and high temperature thermal energy would be available for transfer into a mobile thermal tank. Depending on the number of mobile storage tanks allocated to low-temperature liquid air and high temperature thermal storage, a liquid air powered railway locomotive could be capable of 1,000 kWh to 4,000 kWh of stored energy for propulsion.

The flow battery is well suited to large vehicle application that allows for large storage tanks of positive and negative electrolyte. Energy is stored in the liquid electrolyte and pumps move the liquid through a cell stack that generates an electrical current. For transportation applications, it is possible to pump discharged electrolyte to stationary recharge tanks before refilling the positive and negative tanks with recharged electrolyte. Such transfer of liquid electrolyte would be possible in ship transportation as well as in railway propulsion, involving port area locomotives that could operate in single unit or articulated configuration.

A single unit locomotive would be built with a central cab located next to the cell stacks, with a pair of insulated tanks on either side. One tank would be filled with 35,000 liters of positively charged liquid electrolyte and the companion tank with negatively charged liquid electrolyte, and capable of storing 1,750 kWh of energy. The additional of leading and trailing tanks in a three-section locomotive would be capable of 4,000 to 6,000 kWh, perhaps sufficient to tow a train between port terminal and a railway marshalling yard located within a one-hour distance near a city boundary.

The liquid metal battery developed by Professor Donald Sadoway of MIT is a promising low-cost electric battery technology capable of offering 20,000-deep drain cycles. While originally intended for stationary application, there may be scope to adapt the battery for some mobile applications. The battery interior is lined with thermal ceramic and contains an upper level of low-density liquid cadmium, a small intermediate level of higher-density liquid salt electrolyte and a bottom level of high-density liquid antimony. Gravity maintains separation while vibration can cause liquids to mix, as occurs in a bottle of oil-and-vinegar salad dressing. 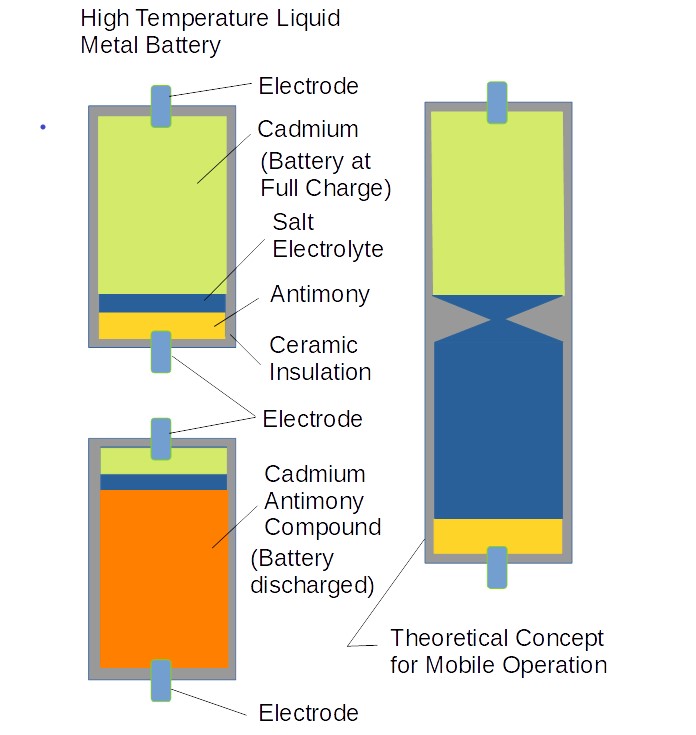 Further research would be required to determine as to whether a higher elevation version of the battery featuring upper and lower chambers with a small central interconnecting hole would be feasible and functional. Such a modification would involve a massive increase in salt electrolyte volume, with little possibility of either the cadmium or the antimony passing through the interconnecting hole. If such a modification were workable, the battery would find application in railway locomotive propulsion with power potential between 1,000 kWh to as high as 6,000 kWh depending on locomotive configuration and overall length.

While some carbon-free energy storage technologies are becoming available for large-scale mobile application in short-sea maritime and in short-distance railway propulsion, research is underway involving many other energy storages intended for mobile application. The solid state battery is one promising technology as is rechargeable aluminum-air battery technology that promises the storage density of lithium-ion technology. University of Texas is undertaking research into a low-temperature liquid metal battery to rival the high-temperature battery from M.I.T. and Ambri. A research team at National University of Singapore has focused on increasing the energy storage density of flow batteries.

A trio of energy storage technologies that includes liquid air, flow battery and thermal storage technology has potential propulsion application in ships assigned to short-sea sailing between ports where energy recharging will become available. While the Ambri high-temperature liquid metal battery would find application in inland waterway propulsion sailing on smooth water, the ability of Ambri research to adapt the battery for mobile application where vibration is present would make the battery an option for railway propulsion. The battery technologies mentioned in this article offer the combination of extended service life when operating repeated deep-discharge cycles.

North American locomotives are built to a one-million pound-force compression load across the chassis length while non-powered carriages are built to an 800,000-lb compression load. Locomotive rebuilders are able to convert some locomotives to battery power, with additional batteries carried in a non-powered trailer car or energy tender. Some extended length railway chassis would need to be reinforced for conversion to flow battery propulsion. The battery concepts mentioned in this article are expected to deliver 20,000 or more deep-discharge cycles.