The operations for the technical launch of the hull of the new ferry under construction for RFI -Rete Ferroviaria Italiana (FS Italiane Group) have been completed. The load out and float off operations have been carried out at Cimar shipyard in San Giorgio di Nogaro by the technicians of T. Mariotti and San Giorgio del Porto, part of Genova Industrie Navali Group. The hull of the N/B "Iginia" is now heading to Genoa, under tow by Tug Gianemilio C., where the construction will be completed in the coming months. During the sea passage towards Genoa, the ship will transit for the time in cross the Messina Strait, where she will return by own means, once in service, of Messina for the first time and then return there in autonomous navigation, with the RFI livery.

The single end Ro-Ro type ship - for the transportation of railway carriages, wagons, passengers and vehicles - is intended for connections in the Strait of Messina and was commissioned by RFI - Rete Ferroviaria Italiana to the Temporary Association of Companies composed by T. Mariotti and San Giorgio del Porto, which won a European tender. The ship, 147 meters long, 19 meters wide and with a capacity of 2,500 tons, will travel at a speed of 18 knots and will boast highly advanced technological, functional and performance characteristics.

The 3.100 tons hull float off was prepared through dock maneuvers and underwater analysis with georadar scanning, while the launch phase - to which took part Mr. Carmelo Rogolino, Mr. Daniele Allegra and Mr. Adriana De Luca for RFI and Mr. Marco Ghiglione for the ATI - saw the use of SPMT self-propelled trolleys combined in 160 axles and of Augustea's AMT Commander semi-submersible oceanic barge, big as a soccer field and capable of a semi-dive of about 13 meters. 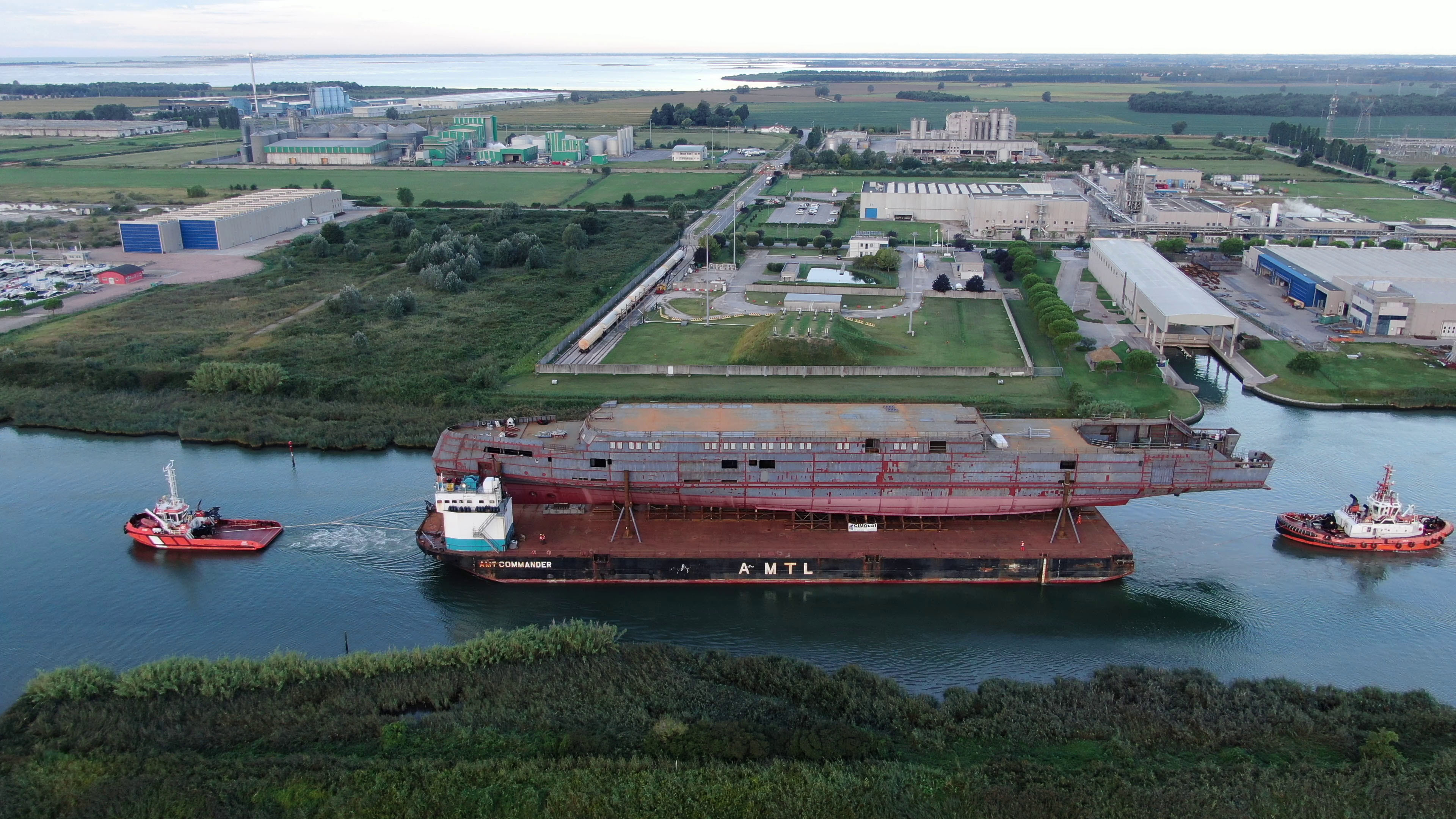 The ferry was finally hooked to tugboat Gianemilio C. and on September 3 she left for Genoa where, if the weather conditions are good, she is expected to arrive in about ten days and where she will be docked at the T. Mariotti and San Giorgio del Porto quays. Th ere, the hull already equipped with engines, generators, propulsion machinery and systems, installed on board during the preliminary fittings at San Giorgio di Nogaro, will be completed with the installation of the two funnels and of the superstructures already prepared in the previous months; the work will then continue with the furnitures, the railway equipment and the completion of all systems.

"In recent years Genova Industrie Navali has aimed at consolidating and making increasingly complementary the businesses of the individual companies that are part of it and of the facilities located in different cities, making the most of synergies and individual expertise - says Mr. Marco Ghiglione, Managing Director of T. Mariotti - The launch of this hull, in addition to being a milestone project, represents a success in the growth path of our Group, as well as a great source of pride and confidence for the future”.

The program of activities has undergone several variations due to the complexity of the operations and in compliance with the regulations imposed by the current Covid-19 health emergency. Thanks to the professionalism and the consolidated synergy between the companies involved, the technicians of Cimolai, Fagioli and Rina, the local workers, the Port Authority of Monfalcone, Nogaro and Grado, the pilots, the moorers, the port and offshore tugboats, the maritime agencies and all the professionals involved, it was possible to complete the operation in complete safety.