The first and second prize awardees of the Fifth Annual International Student Design Competition for a Safe Affordable Ferry were honored at a reception on March 22 at the annual Ferry Safety and Technology Conference in downtown New York.

Dr. Roberta Weisbrod, Executive Director of the Worldwide Ferry Safety Association, which sponsors the conference, and the annual student design competition, said: “The Design Competition lets the next generation of mariners know about the needs and opportunities for safe ferry design and operations. The competition was difficult and student teams who made submissions are to be commended.”

About the Student Design Competition

The specifications that the students had to meet were exacting and required research, calculation, creativity, and hard work to meet. More than half of the registrants to the competition did not submit designs. For those teams that persisted and came up with credible solutions, the judges want to acknowledge their efforts as well. his year’s competition has been supported by the Maritime and Port Authority of Singapore (MPA).

• The tri-mono hull, (mono hull below the waterline, but a trimaran shape at the waterline) provides excellent stability and because of the hull’s configuration and the generally benign environmental conditions of the waterway, the vessel is ballast free

• Diesel is the fuel source supplemented by solar power generated by a huge malleable screen at the top of the vessel. The giant screen doubles as an augmented reality screen showing manmade visuals when not needed for solar.

• Navigation is assisted by a waterjet propulsion system, azipods, as well as bow and stern thrusters. The Organic Light Emitting Diode (OLED) screens in the wheelhouse assist navigation by visuals indicating incoming ships and weather patterns. This is made possible by modern sensors communicating with one another in a webbed network also known as the internet of things.

Their faculty advisors are Hasanudin, Agoes Santoso, and Muhammad Zaman. The latter two advisors will be attending the reception as will the Transport Attaché of the Indonesian consulate in NYC, Mr. Saptandri Widiyanto. 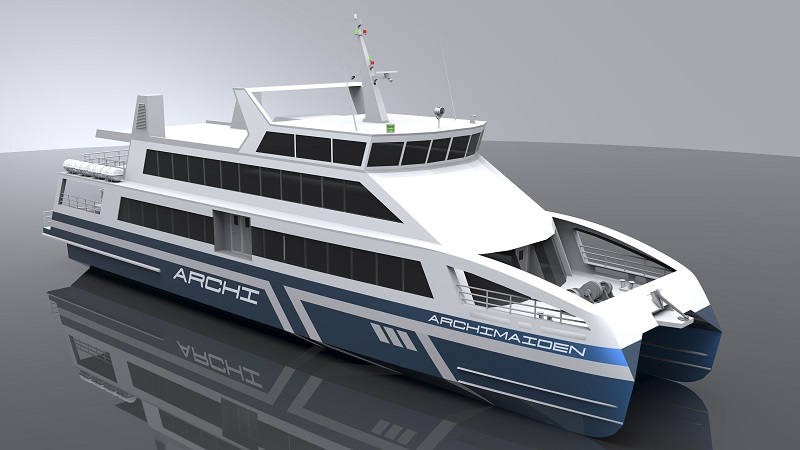 • The vessel is an aluminum catamaran. It is fueled by green energy as a Diesel-LNG hybrid. The design team notes that Singapore has LNG fueling stations. The judges appreciated the simple straightforward design as a positive for construction and operation.

• Innovative features were set up to address debris in the harbor. The vessel has a debris monitoring system as well as a system to keep debris from clogging intakes.

The team from the Indian Institute of Technology, Kharagpur is led by Biswamohan Mishra. Teammates are Ajith Bhargav and Chaitanya Srinidhi. The faculty advisor is Dr. Vishwanath Nagarajan.

The Indian team's design, the "BC Grandeur," included the following features:

• The vessel is an Aluminum catamaran. With a center bow/hull to reduce pitch movement, the passengers have a more comfortable ride in the cabin.

• Sensors that measure the draft are innovative and are related to the alarm system to prevent overloading.

Third prize from the Netherlands

The team from the Delft University of Technology the Netherlands is led by Annemieke de Smeth. Teammates are Antine Reddingius, Daniëlle Roos, and Gert Galis. The faculty advisor is Hans Hopman.

• The vessel is an aluminum catamaran. The judges appreciated its good layout, good plate thickness, and good damage stability.

• The vessel report was distinguished by an evaluation of accidents in the area; the issues identified such as collisions, and debris in water were addressed by the design.

• The vessel is equipped with a navigational system able to detect objects up to 200 m in front of it. The vessel is protected against underwater debris with a skirt-like structure
made of high-density polyethylene.

Honorable Mention is made to two teams from India, one from the Indian Institute of Technology, Kharagpur led by Saurav Agarwal and the other from the Indian Maritime University Visakhapatnam, led by Pradip Desai.

The teams from Bangladesh University of Engineering & Technology Dhaka led by Atik Amin and the University of Cebu, Philippines, led by John Ranoco receive Significant Recognition as well for their success in designing a vessel according to the specifications.

About the International Student Design Competition for a Safe Affordable Ferry?

The competition is supported by a grant from an anonymous family foundation and by sponsors of the Ferry Safety and Technology Conference to which the awardees are invited to speak. Travel and registration for students is supported by the TK Foundation.

About the Worldwide Ferry Safety Association

The Worldwide Ferry Safety Association is a not-for-profit organization that is dedicated to preventing ferry fatalities and expanding safe ferry transport all over the world. The organization commissions and conducts research; maintains a database on ferry accidents, which it makes available to other organizations, and in addition to sponsoring the design competition, convenes a Ferry Safety and Technology Conference. For more information, please visit https://www.ferrysafety.org/.