Hydrex diver/welders have installed a new echo sounder and speed log system in the shell plating of a ro-ro vessel during its scheduled port stay in Eemshaven, a coastal town in the province of Groningen in the north of the Netherlands.

Dave Bleyenberg, Hydrex Production Executive, said: “Our teams can very quickly install or replace any type of transducer without any hindrance to a ship’s schedule. This was demonstrated when the operation in the Netherlands was concluded in a single day.”

Following an inspection of the vessel’s tank where the echo sounder was to be installed, a small hole was drilled into the shell plating to pinpoint the exact location on the waterside of the hull.

The Hydrex team then built and installed its bespoke mobile drydock system, mobdock, over the area to provide a dry working environment inside the tank without water ingress. A section of the adjacent frame was removed to give welders greater access. The edges of the opening were then prepared for the installation of the echo sounder base flange which was positioned and secured with a full penetration weld.

Following the installation an independent inspector carried out NDT testing of the weld seams. The system valve was then installed on top of the flange by the Hydrex team and the cofferdam removed from the hull.

Bleyenberg said: “The combined echo sounder/speed log system was ready for connection to the engine room the same day, meaning the vessel was able to continue its operational schedule without delay. The technical department here in Antwerp played a pivotal role in creating a tailor-made mobdock solution so that all work could be carried out in time.” 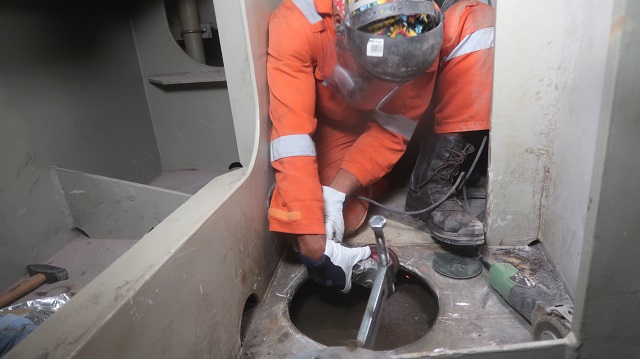