Blyth Catamarans Ltd has handed over its largest vessel to date, an 18m survey vessel for the UK’s Swansea University, a project that has been in the making for nearly 14 months.

Mary Anning features a large A frame, dive lift and survey station for Swansea University. And it boasts hard-wearing DuroWipers pantographs, synonymous with the new Shannon class lifeboat builds. “With this being our largest vessel built to date we are very proud of the outcome and are confident that Swansea University will be pleased with her,” said Stuart Davidsen, managing director, Blyth Catamarans.

“Among many of its advanced features are its DuroWipers which is a reputable brand which has always given us excellent reliability for our customers for over seven years. DuroWipers are the obvious choice because they offer a ‘linked wiper system’ where a second wiper is connected to the motor to give a wider wiper area, required for the larger front windscreen on the Mary Anning.” 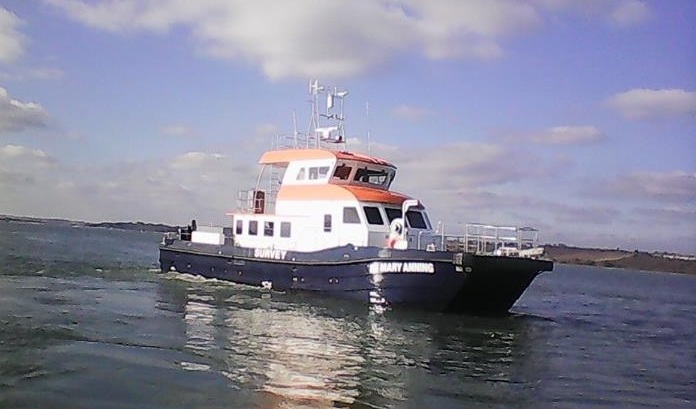 Among some of the other advanced specs onboard Mary Anning are two trawl winches, a moon pool with multi-beam deployment, dive lift and an external TV to show survey results.

The wheelhouse has a wet lab with TV, survey station, dinette with TV, workshop, bow fender for turbine transfer, raised helm to give 360-degree visibility and observation platform for bird watching.

Davidsen said that the vessel has been constructed under dual coding for both MCA class VI to carry 26 students, plus standard coding for cat II 12+2.

Following successful sea trials, the vessel has achieved a top speed of 28+ knots and a cruising speed of 18 knots being powered by two MAN V8 1000hp engines with five blade props from Clements Engineering.

The Swansea University department of biosciences will use the vessel for coastline survey, mapping critical habitats, studying water quality, observing marine wildlife and deploying marine equipment.
Next up for Blyth Catamarans is a 14m survey vessel, 15m passenger vessel and 12m fishing vessel, currently under build, with a further two vessels also contracted.

In order to cater for building larger vessels in the future, the company recently opened an onsite factory featuring a 9m high building with gantry.