Aberdeenshire-based Macduff Ship Design specialises in developing vessels that are tailored to the specific requirements of its clients. This year the company celebrates 25 years since its inception.

Macduff Ship Design Ltd. was founded in 1993 by Donald Cameron formerly of the renowned James N Miller shipyard and a consortium of local Macduff business men. From then until now the company has grown steadily, seeing much change in the industry and adapting to new demands in the commercial sector.

Initially the company was heavily involved in the British fishing industry, primarily carrying out stability investigations on existing vessels and, in close conjunction with Macduff Shipyards, assisting with new vessel design and vessel conversion work. However, very soon the company’s expertise as designers took off. From 1995 until around 2003 Macduff designed approximately 55 different fishing vessels, ranging from between eight and 41 metres in length, which were built in shipyards across the UK and in Spain, Holland, Portugal, Croatia and Canada. 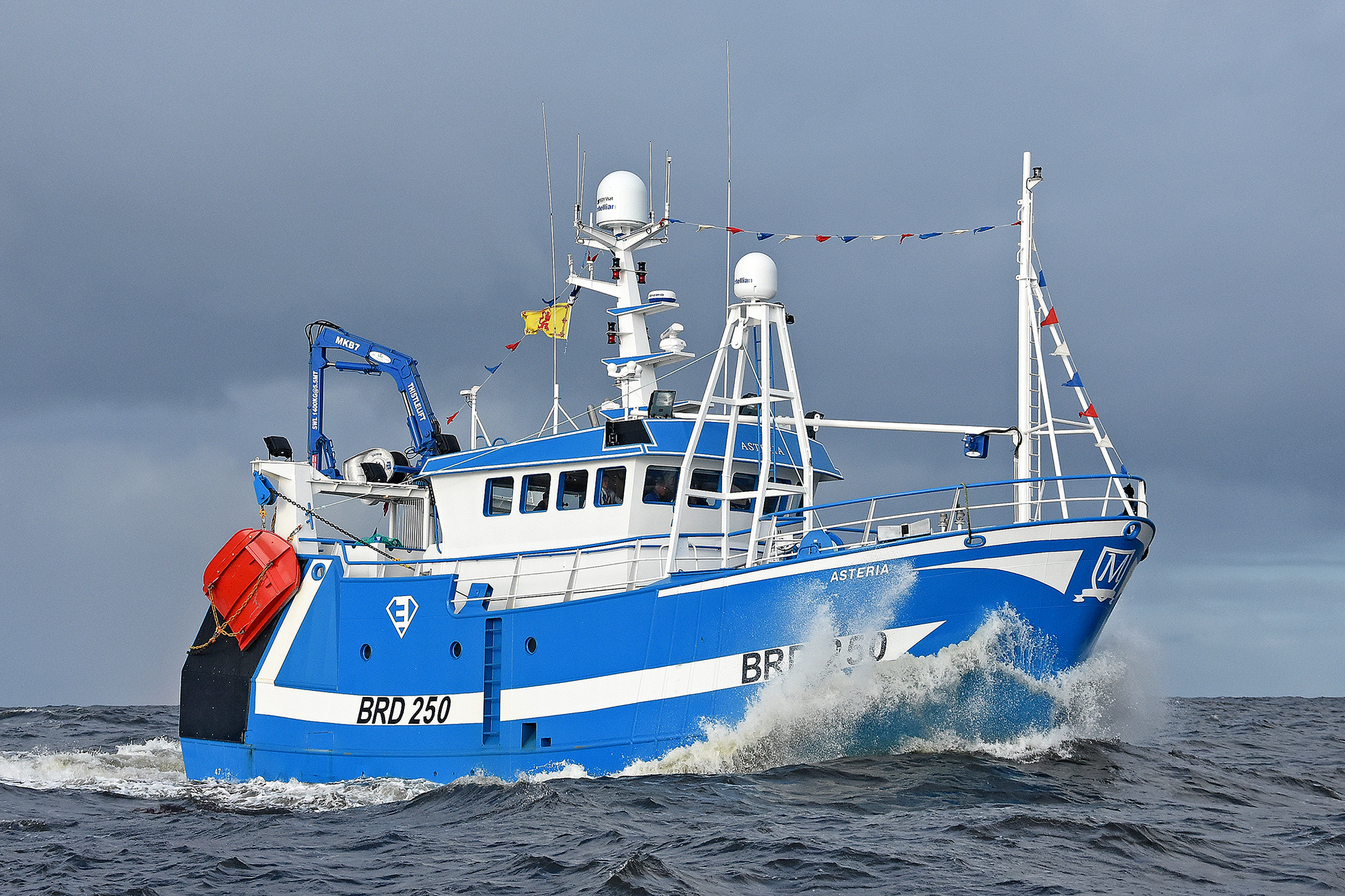 Around 2003, the fishing industry was in decline due to regulations and restrictions on the catch as well as decommissioning of vessels reducing fleet size, so Macduff Ship Design decided to concentrate its efforts into the commercial workboat markets. This was an area where the company had done some work with local owners and operators and recognised a demand and the potential for the transfer of knowledge into this market. This proved to be a good decision, launching a fleet of new workboat designs and paving the way for further collaborations between Macduff and international shipyards such as Tor Marine in Turkey, which Macduff still works closely with. The company’s current design repertoire includes a re-emerging fishing vessel sector as well as tugs of all shapes and sizes, pilot and patrol vessels, general workboats, line handlers, fish farm vessels, ferries and many other varying designs. Macduff Ship Design is a company that does not restrict itself in its ambitions and indeed specialises in providing bespoke and carefully tailored vessel designs for its clients. This gives the company a competitive advantage over the ‘off the shelf’ market, and many of its vessels perform an impressive range of functions for their size. Macduff provides ship owners and ship builders with complete design and engineering/outfitting drawing packages, including cutting information and all stability calculations.

With increasing demands on its services and the need for expansion both in terms of space and staffing, the company decided that it was time to upgrade its office from an ex-fisherman’s cottage in Macduff to more purpose-built premises. In 2008 plans were drawn up for the current office, situated just around the corner from the original premises and still within Macduff Harbour.

HRH The Princess Royal officially opened Macduff Ship Design’s new offices on 1 March 2012. The open plan design on the first floor is spacious and has allowed for additional staff to join the company, as well as having a dedicated meeting room, large storage space and facilities for staff at ground floor level.

Six years later, the company has expanded, now employing 10 personnel, having recruited four new graduates and opened a new branch dedicated to vessel surveying, Macduff Marine Surveyors. The surveying branch was formed with assistance from renowned local surveyor M D Tillman and is headed by Jim McDonald - an experienced chief engineer. The new enterprise fills a gap in the market and meets demand both in the North-East of Scotland and further afield.

With the retirement of Donald Cameron in 2014, Ian Ellis took over as Managing Director. Ian had been with the company since its early years and has since been leading the company into new ventures and consolidating existing relationships with clients. The company also recognises that its experience within the local Scottish fishing industry gives it a unique insight into fishing operations which is transferable to other fishing markets. Current projects include a ninety foot fishing vessel for Canadian waters, which is being built in Vietnam and a 14m Line Handler for Cheoy Lee Shipyards in Hong Kong which can also be adapted as a tug or other functionalities. Macduff hopes to build on these projects, with new vessels already in the pipeline for Canada. Closer to home, a design has been completed for a fifty-five foot Trawler style motor yacht for a private owner, as well as a pilot vessel that has recently been delivered to Ayr and a 16m tug that will be on its way to Shoreham Port in July this year. Both of these vessels have been built by neighbouring Macduff Shipyards, enabling a smooth build process due to ease of collaboration between Macduff Ship Design and the yard. This varied order book shows the flexibility of the design team at Macduff and their ability to tailor designs to meet owner’s needs. 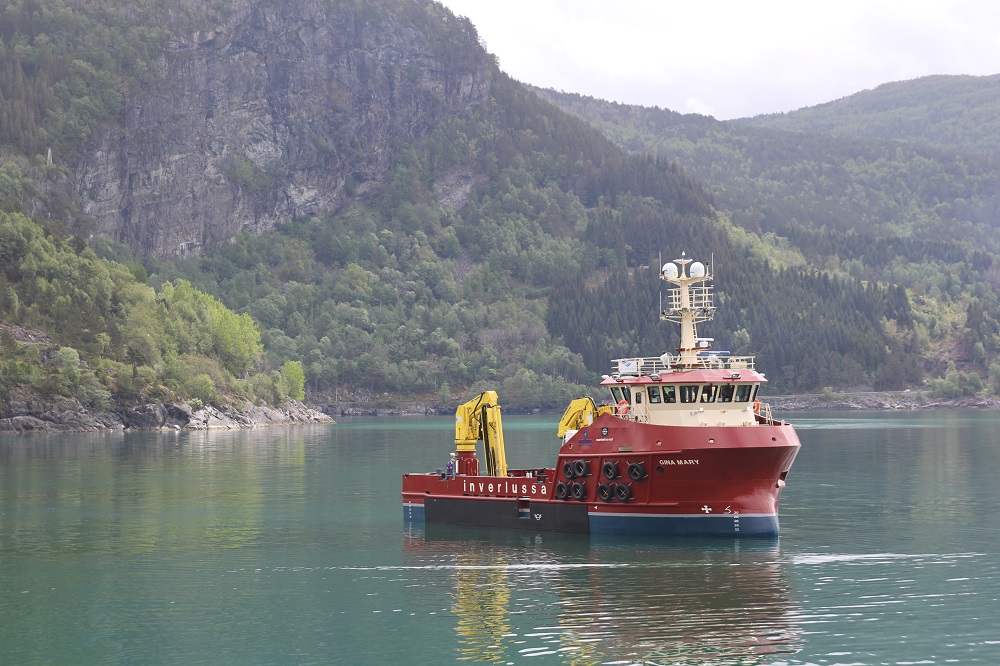 Notable projects in the company’s recent years have included a 36.5m Moorings Maintenance Vessel for the Port of London Authority, part of Macduff’s ‘Multi-Mac’ range, a multi-vessel contract for Tor Marine shipyard for operations in Saudi Arabia, and a series of multi-purpose fish-farming vessels for Inverlussa Marine Services in the UK (above). These projects have provided their own unique challenges with the wide variety in vessel designs and owner’s requirements from simple workboats to large high speed patrol boats to ASD tugs, all of which the company has successfully met in its trademark fashion. The UK fishing industry is also now in a period of improved fortunes, leading to a demand for new designs for the next generation of owners wishing to make their vessels more efficient and with better seakeeping and stability characteristics.

We have been fortunate to be able to recently invite all of the original founders to a celebration of the company’s achievements over the past 25 years where we were able to present them with a celebratory special edition 25 year old single malt whisky. We will also be attending Seawork International in Southampton from the 3rd to the 5th of July and we would wish to invite all our past and any potential clients to visit our stand to celebrate our anniversary. We will be holding an informal drinks reception from 15:30 on Tuesday the 3rd of July but would be happy to see you at any time during the show.