Zero-emission marine propulsion is generally associated with solutions for working vessels like tugs and ferries, but two organizations are working to bring carbon-free power to the more glamorous world of high speed powerboat racing.

The recently-formed E1 Series is set to become the world's first electric powerboat racing circuit as early as next year. It is the aquatic equivalent of the Formula E racecar series and the Extreme E offroad race series, and there is a reason: it shares the same founder, the successful e-motorsports entrepeneur Alejandro Agag.

During the pandemic lockdown, Agag worked with his friend Rodi Basso - a Formula 1 motorsports engineer - on a way to shine a spotlight on sustainable marine transport and port operations. A series of exciting, high-speed races with a new class of electric powerboats seemed like just the thing.

Working with Norwegian designer Sophi Horne, Agag and Basso commissioned a single-class electric boat design for the series. The hydrofoiling craft is called the RaceBird, and it flies above the water with power from a 150 kW battery and a Mercury electric outboard. The first "flight test" took place in April on Italy's River Po with former world powerboat champion Luca Ferrari handling trials behind the wheel. "Seeing the RaceBird fly proves to me that we can use this exciting, new sporting platform to drive technological innovation in the marine industry and create something spectacular for fans," said Agag.

The debut season is set to begin in 2023, with early previews of the craft coming soon. The team is recruiting drivers and scouting locations now, and the first announced team will be based in Venice.

To achieve UN Race to Zero "gold standard" status, the series' zero-emissions race boats would be transported to and from racing events by hydrogen-powered zero emissions trucks, like the Kenworth/Toyota H2 electric T680. In order to offset the additional power consumption of race operations throughout the season, the boats, trucks and trailers would be fitted with flexible solar panels. 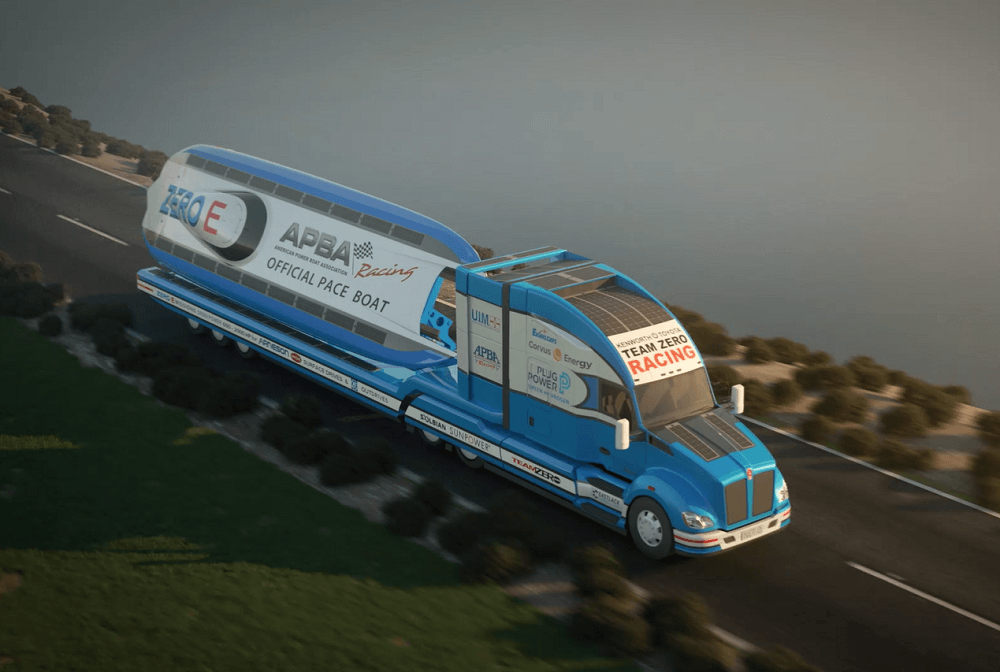