West Africa Container Trade on its Way to Maturity

Shipping analyst Dynamar has released its fifth biennial edition of the West Africa (worldwide) Container Trades, with author Darron Wadey highlighting that although container volumes barely grew between 2013 and 2017, the region is now on its way to maturity. Full container volumes forecast to reach 4.3 million TEU by 2021 as a result of an estimated five percent annual growth rate for container cargoes.

Capacity, carriers, services and sailings, all came down in 2016, says Wadey, but they are now all growing again. Lomé (Togo) is now the major West African container port, surpassing Lagos (Nigeria).

West Africa comprises 25 nations, big and small, including five landlocked countries. The total region encompasses around 9,700 kilometers of coastline and a land area of 12.75 million square kilometers. It accommodates over 535 million people, has a trade value of $294 billion and a GDP estimated at $802 billion.

The Gulf of Guinea region makes up for a share of 65 percent of the population, 71 percent of the GDP,  63 percent of trade and 56 percent of container throughput. It also houses the largest ports in terms of throughput, which are located in Togo, Nigeria and Ghana, in that order. 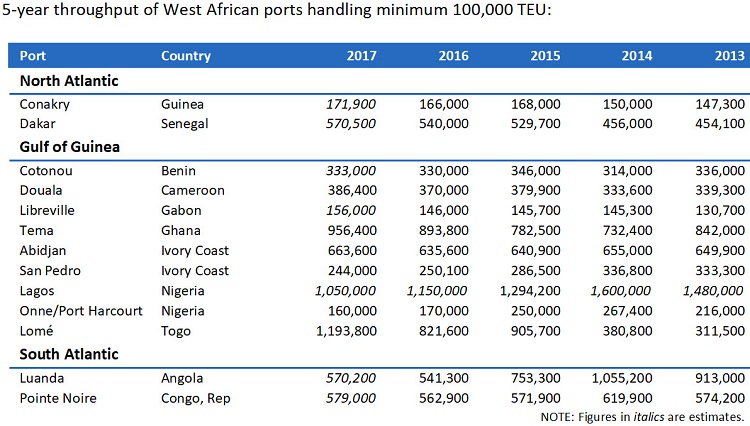 On the way to maturity

“West Africa is clearly moving into the direction of maturation, certainly if compared to East Africa,” says Wadey. “The ships are bigger, there are more carriers and there is a substantial presence of international port operators.”

In 2017, 285 container ships sailed the seven intercontinental trade lanes to West Africa. Deployed by 24 different operators, their average capacity was 3,300 TEU. The biggest ship, a 13,600 TEU vessel, is operated by MSC in a hub and spoke service, connecting Lomé with a large number of regional ports by feeder.

West African terminals and ports have benefited from foreign investment by terminal operators and carriers driving growth, he says. “For that reason they are generally well equipped.” Foreign terminal operators include APM Terminals, Bolloré, China Merchants Ports, DP World, ICTSI, Portek, TIL Group (MSC) and various carriers, such as CMA CGM in Cameroon and Nigeria, Grimaldi in Nigeria, and NileDutch in Angola. Together, these companies are involved in 30 terminals with another five under development.

Crude: promising then and again?

West Africa crude oil production shrank in 2015 and 2016 when the average price of crude oil plummeted. As a consequence, between 2013 and 2017, West African merchandise trade value shrank by one third to $294 billion. In particular Nigeria and Angola suffered, with both countries heavily dependent on the oil and gas industry. “The only region to show absolute growth over the period was the North Atlantic region, generally the poorer cousin. Overall, West African container volumes have grown by 1.4 percent only in 2013-2017 period,” says Wadey.

“However, there is hope for West Africa again and the carriers serving its trades. The price of crude oil is on the rise, bringing investors back. As such, after a massive two year dip, West Africa is poised for strong growth yet again. This should also translate into increased container volumes, forecast to grow by five percent until 2021.”

Lomé in Togo has become West Africa’s major port, surpassing Lagos. A key development backing Lomé was the commissioning of Lomé Container Terminal. It handles close to 890,000 TEU annually, close to 75 percent of Lomé’s total throughput of 1.2 million TEU. “The establishment of Lomé Container Terminal is part of a greater trend in West Africa, which sees more and more carriers becoming involved in ports and terminals. After all, carriers must go somewhere using their oversized ships,” says Wadey.

Over the next year, over a dozen West African ports will be able to handle vessels of more than 6,000 TEU, even as large as 10,000 TEU. However, Lagos lags behind, despite being the largest port in the region’s largest economy. It was the highest ranked West African country in 2015 but is now only fifth in terms of liner connectivity. Chronic hinterland congestion threatens its development.

There are currently 54 container services connecting with West Africa, down from 71 in 2014.

While direct connections remain the core of the container services to West Africa, feedering or relay via Mediterranean hubs remains resilient. Containers originating from Asia, Europe and the Americas reach their West African destination -and vice-versa- with transhipment at a Mediterranean hub, generally Algeciras or Tangier-Med.

Maersk Line and sister Safmarine initiated Algeciras-West Africa transhipment links in the early 2000s, operating eight relevant services in 2004. “Interestingly, despite the emergence of very capable terminals across West Africa, there has been no substantial decrease in indirect traffic via the Med,” says Wadey. “Even today, an estimated 25 percent of all West African container volumes run via a Mediterranean hub.”

The 230-page West Africa Container Trades 2018 report can be ordered for direct download at www.dynamar.com/publications/207 or by contacting Dynamar B.V.

[By M Matheswaran] The Indian military is undergoing what may be its most significant reorganisation since India’s independence, with considerable implications for its future strategic posture. One important issue that has been brought to the fore is the role of the Indian Navy as a regional power projection force built around three aircraft carriers. The government’s decision on this issue will have significant implications for the region. The Indian Navy currently operates one carrier, the 45,000 tonne INS Vikramaditya, with a second, the 37,500 tonne...

In western Nova Scotia, a serious fight is brewing between commercial fishermen and the Sipekne’katik Mi'kmaw First Nation over lobster fishing rights. For the first time in 20 years, Sipekne’katik fishermen have exercised their treaty rights to launch their own "moderate livelihood" lobster fishery during the annual closed season, leaving local commercial fishermen concerned that there will be less left to catch. Last weekend, hundreds of Sipekne’katik lobster pots were removed from the water, and many were deposited outside the...

The LNG carrier Methane Princess was attacked by pirates off Malabo, Equatorial Guinea on Saturday, and one member of her crew was kidnapped. According to Swiss financial news outlet AWP, the attack occurred at a position about 10 nautical miles off Malabo at about 0430 hours Saturday morning. Security consultancy Dryad Global reports that the Methane Princess had just finished loading and was at anchor at the time of the attack, and two Filipino crewmembers who "were on the jetty" were...

The word “disruption” has been used and overused to the point of becoming a cliché, but there's one area of the maritime industry that it seems to have bypassed so far: ship repair. Not anymore. Along with the many disruptions that the COVID-19 pandemic has caused, you can now add new technologies to the list. The virus has forced yards to rethink their operations and interactions. Detyens Shipyards in the U.S., for example, has been operational throughout the pandemic and...