USS Gerald R. Ford took several significant steps toward her planned first deployment later this year, five years after the first-in-class, next-generation aircraft carrier was delivered to the U.S. Navy. Reports indicate that the carrier, which has had problems during her preparations, has now completed modernization and maintenance, with successful sea trials and her next-generation systems are fully functioning. She was officially transferred from the construction team office to the in-service program office as her crew prepares for the final training and tests before deployment in the fall of 2022.

Ford is five years behind the schedule for her anticipated first deployment with the Navy admitting that she has had “painful teething issues,” some of which were due to be corrected in the most recent six-month shipyard period known in Navy parlance as “Planned Incremental Availability.” Ford was commissioned in July 2017, two years behind schedule and $2 billion over budget, and since then the Navy and its teams of industry partners have worked to complete the next-generation systems and resolve issues identified during the prolonged shakedown. Among the widely publicized issues have been bearing failures, breakdowns of her first-of-a-kind electromagnetic launch catapults and arresting gear, and her electromagnetically-actuated weapons elevators, which were not working when she was delivered and have suffered failures during the post-commissioning process.

The first-of-class aircraft carrier arrived at Huntington Ingalls Industries-Newport News Shipbuilding in Newport News, Virginia in September 2021 for the maintenance and upgrades after completing three shock trials during the summer of 2021. In addition to the anticipated repairs after the shock trials, the Navy reports the work ranged from updating the galley to modernizing the ship’s Consolidated Afloat Networks and Enterprise Services (CANES) system, an enhanced shipboard computing system that consolidates multiple legacy networks.

At the start of the shipyard program, teams conducted detailed inspections, assessing potential damage sustained during the shock trials. The Navy had last conducted shock trials on the Nimitz-class carrier USS Theodore Roosevelt in 1987 and used those results plus other modeling and simulation to estimate the potential impact from the explosive events on Ford.

“Ford required only 20 percent of the repair work we saw with Theodore Roosevelt,” said Rear Adm. James P. Downey, program executive officer for aircraft carriers. He added that of the required shock trial-related repairs, about 85 percent were completed by ship’s force, as opposed to work that needed to be completed by the shipyard. 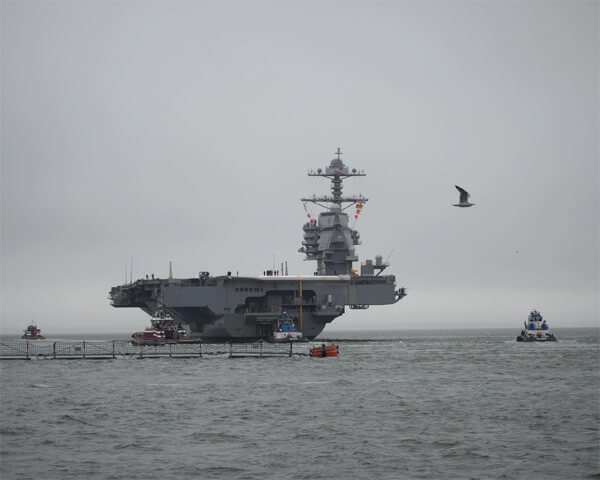 Ford left the shipyard on February 25, 2022 for sea trials after her maintenance and upgrades (USN photo)

Modernization work on the newest class of aircraft carrier the Navy reports has been streamlined, when compared to work on Nimitz-class ships. Ford’s reconfigured command and control spaces, for example, accommodate new technologies without the need for cutting into decks and overheads.

“Historically, about 40 percent of modernization work on Nimitz-class carriers goes into rip out, which involves cutting and welding,” said Downey. “The Navy specifically designed Ford with a flexible infrastructure, so you can build in new capabilities to enhance system integration that facilitate immediate operational gains for the warfighter.”

One of the key milestones the Navy is reporting is that four months into the shipyard program the ship’s eleventh and final Advanced Weapons Elevator was completed and handed over. This marks a significant milestone for one of the ship’s most complex new technologies, which had not been operational at the time of delivery. Nine months ago, reports said only seven out of 11 were online despite the Navy’s efforts, including recruiting a team of outside advisers and allocating 18 extra months for a post-commissioning shakedown.

Three other Ford-class aircraft carriers, John F. Kennedy, Enterprise, and Doris Miller, are currently under construction at Newport News Shipbuilding. The Navy reports that it is incorporating lessons learned, including from the shock trials, to further harden follow-on ships in the Ford-class.

After completing sea trials off the coast of Virginia, Gerald R. Ford sailed to its home at Naval Station Norfolk, where the crew will begin several months of training and certification in preparation for the ship’s first deployment in the fall of 2022. Among the steps ahead are system qualification tests, air warfare training, flight deck certification, and combat systems operational readiness evaluation.